Simon Levin,who had campaigned against EDO for many years, passed away on 24th June 2011 - one year ago 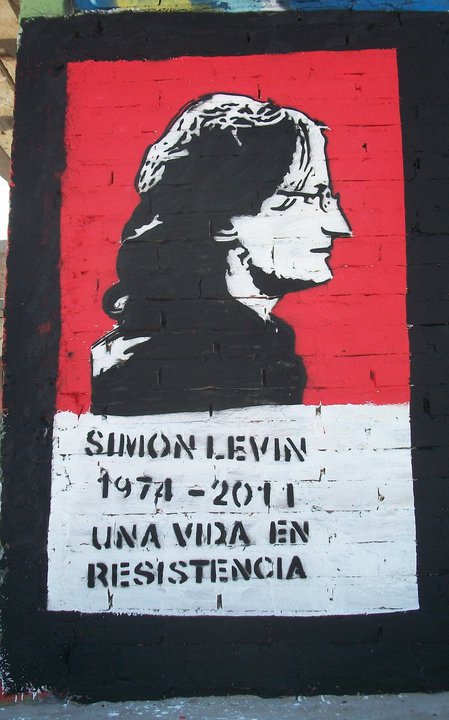 Simon had spent much of his life fighting against injustice. He often spoke about attending pickets during the miners strike when he was a young boy. Simon was an active supporter of the Irish struggle against imperialism and, during the last decade, has been involved in action for Palestine and against the Iraq war. Not only was Simon's dedication evident in all that he did, his depth of knowledge on a range of subjects was second to few. His impassioned debates were always well researched, proving a difficult andsometimes frustrating opponent in political arguments over a pint late into the night with his friends, as well as to those who represented the oppression he was determined to fight. He was always a delightfully sarcastic thorn in the side of any police presence.Simon was a firm atheist and socialist, scathing of sectarianism, cliques and "tooth-fairy worshippers".

Simon was from a Jewish background; his great grandparents were murdered at Auschwitz. This was one of the reasons that he was attracted to the Palestinian struggle against Israeli apartheid. In 2004 Simon travelled to Palestine and spent months as an international volunteer in Balata refugee camp. During Israeli army invasions Simon provided an international presence designed to make people in the camp safer and support Palestinian resistance. In 2008 Simon led a delegation to the Jordan Valley and worked with Palestinians to establish Fasayil School, despite Israeli military orders that building was prohibited.

In 2004 Simon wrote "I have witnessed the destruction of family homes by the Israeli army in retaliation for suicide attacks in lsrael I would not consider this self-defence' it is collective punishment. I have queued for hours in the blazing sun at checkpoints where Palestinian civilians are pressed like cattle in what appears to be a deliberate attempt to humiliate them in their own lands, and have accompanied peaceful demonstrations against the Annexation Wall.The wall continues to be built on land accorded to Palestinians under the Oslo agreement, dividing Palestinians from their water and agricultural lands. These demonstrations, often supported by brave and idealistic Israeli activists I count as my friends, were broken up with tear-gas, percussion grenades and rifle-fire. If there is to be peace in this region, Israel must stop provoking Palestinians into armed response."

Here are some blog posts that Simon wrote in his unmistakable style for the group during his stay in Palestine in 2008:

Simon had been involved in the Smash EDO campaign since its inception; he was part of the first blockade of EDO in 2004 and was involved in the fight against EDO's planned injunction against protesters outside the factory. In 2009, during the Israeli massacre in Gaza, Simon helped the decommissioners break into the EDO factory and destroy the production line. In 2010 he was found not guilty of conspiracy to cause criminal damage on the basis that he had acted to prevent war crimes.

On hearing the verdict he said "Considering that the whole point of this is that we have broken no law, hopefully it will set a precedent for the people of this country to realise that in a liberal democracy we are the checks and balances"

Despite personal battles, Simon never gave up on the struggle for justice and the well-being of those lucky enough to count him as a friend. On June 30th 2011 he had planned to bring food to the picket lines in support of the strikers.

One friend said "Simon was not only a dedicated activist in the name of liberty, against oppression in all its forms, but a sublimely passionate human being, whose eccentricities, eloquence and wild imagination will never be forgotten."

For those of you who want to remember Simon go to your local arms factory, importer of Israeli goods or oppressor of workers and do a vigil, noise demo or action. Have a beer. He would have liked that...