The peace campaign opposite the British Houses of Parliament continues with Barbara and a number of supporters. Now in its 12th year it is a permanent thorn in the side of the establishment. 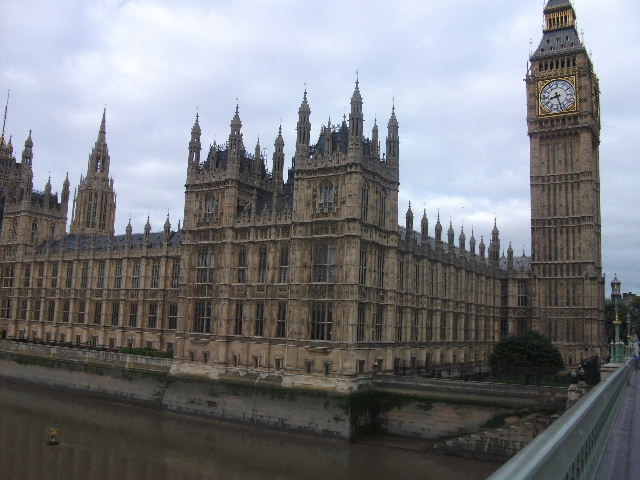 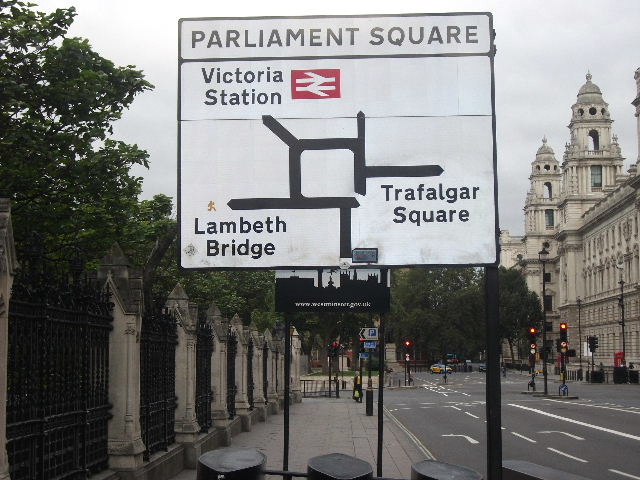 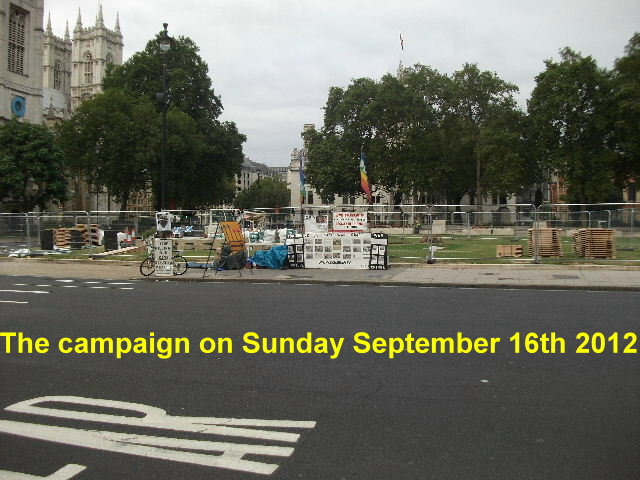 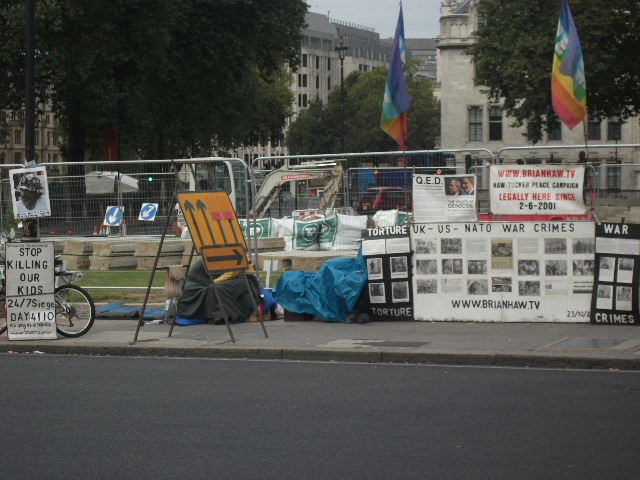 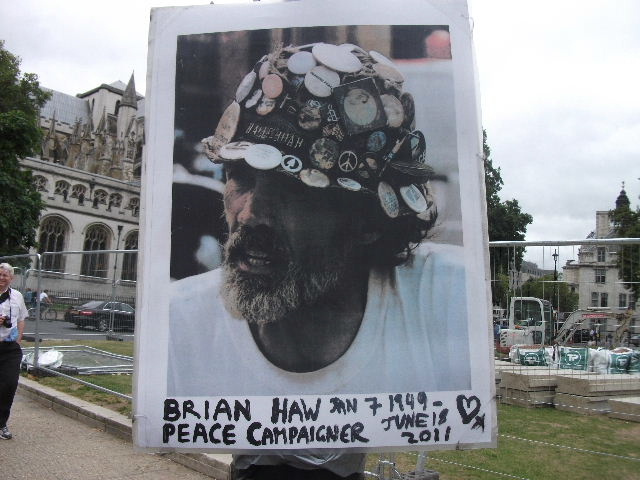 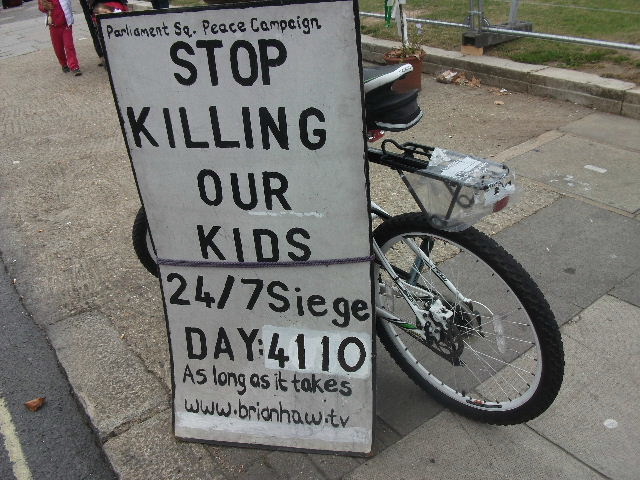 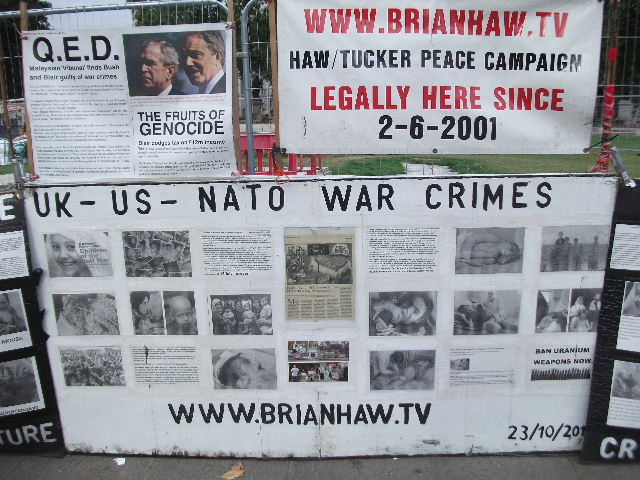 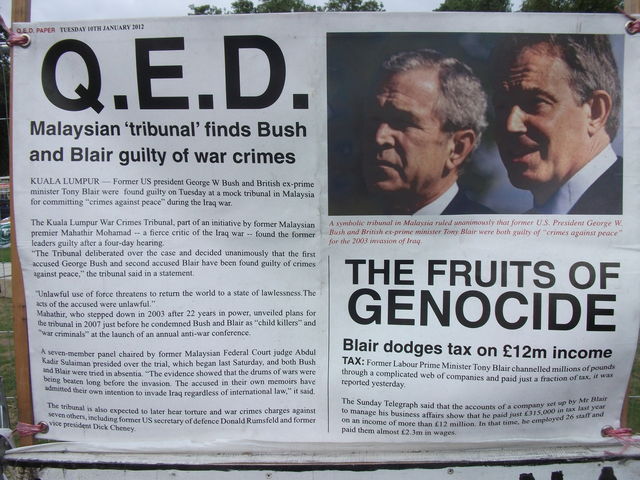 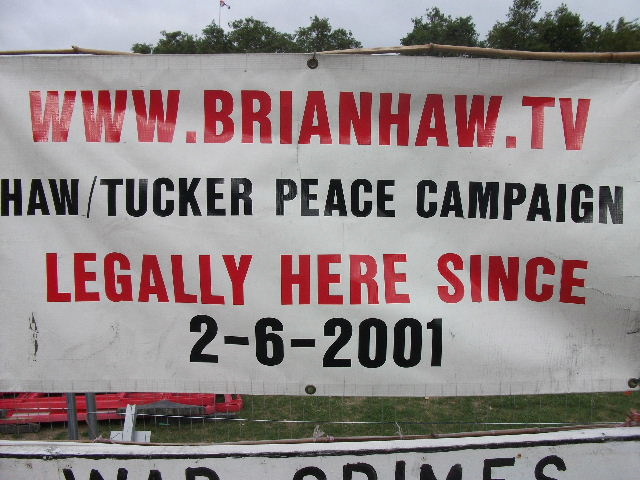 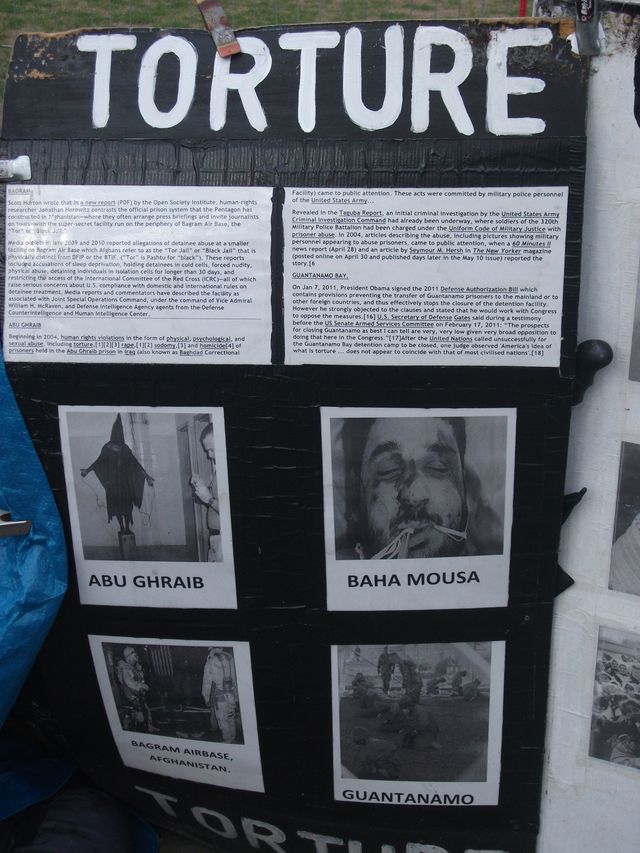 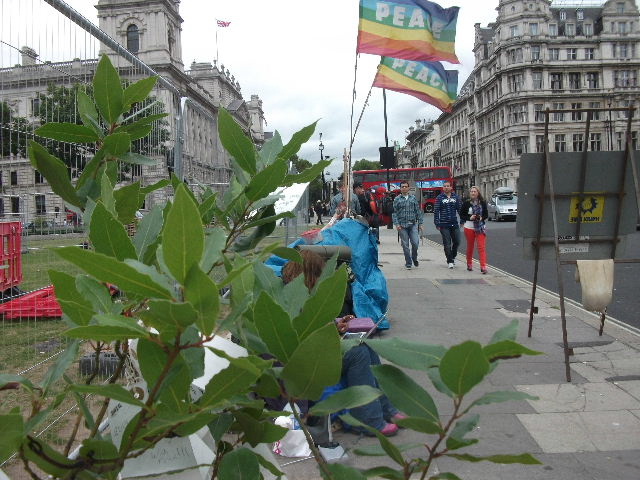 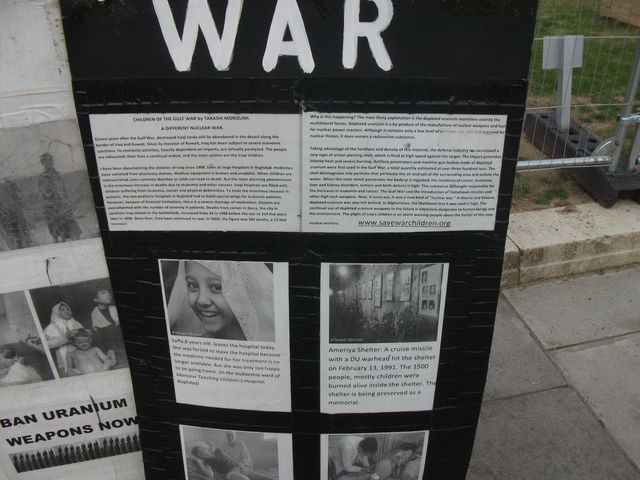 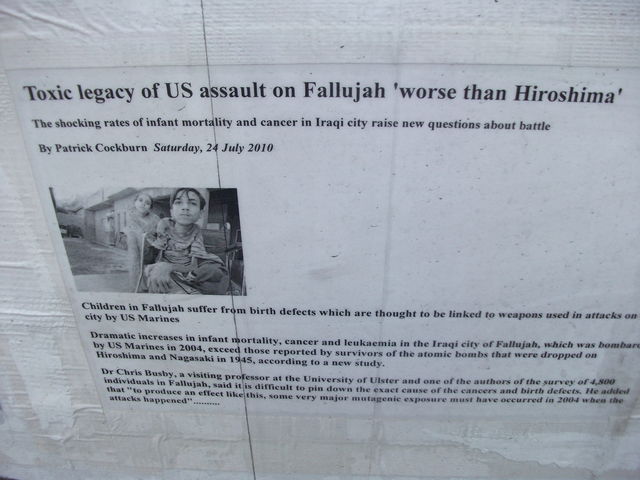 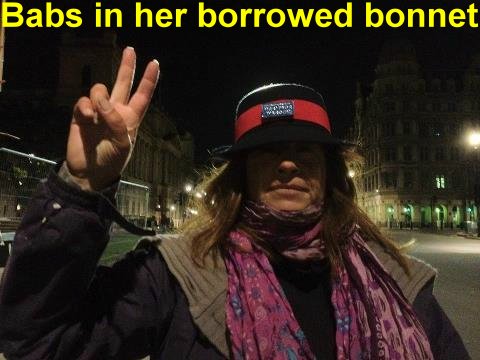 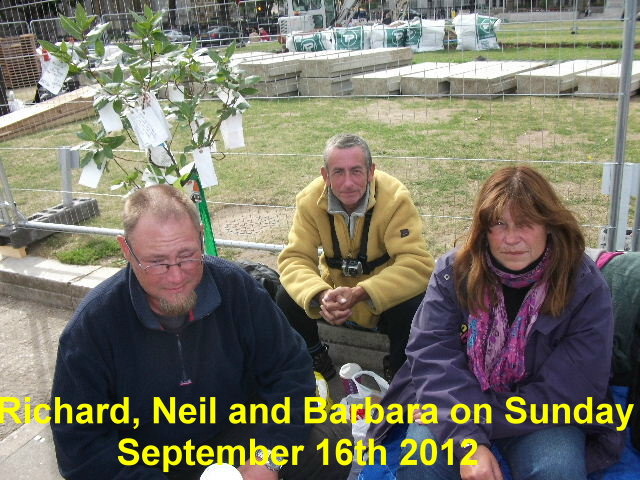 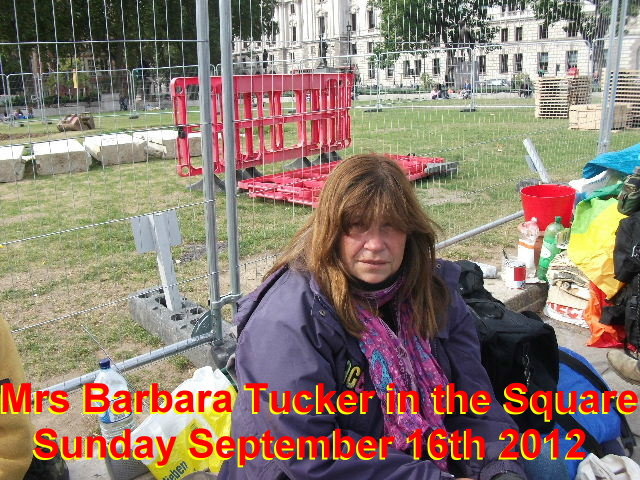 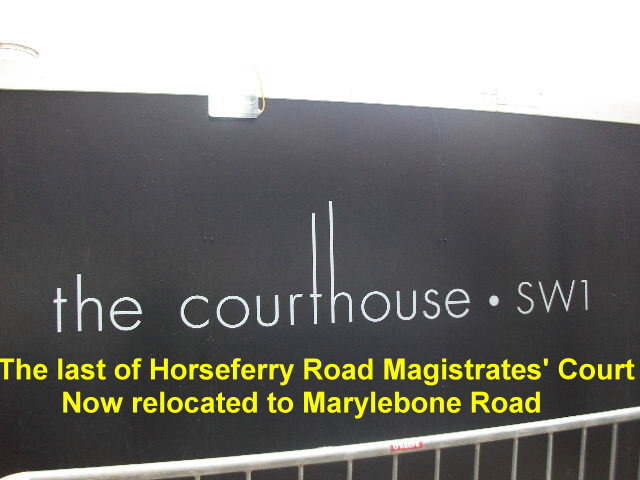 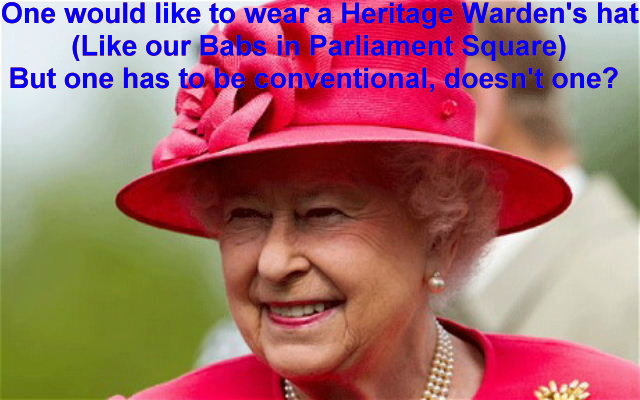 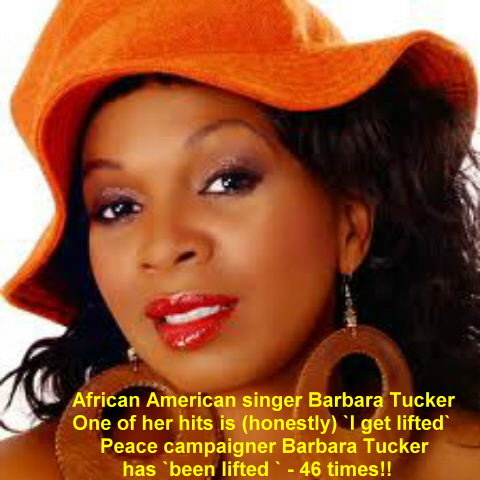 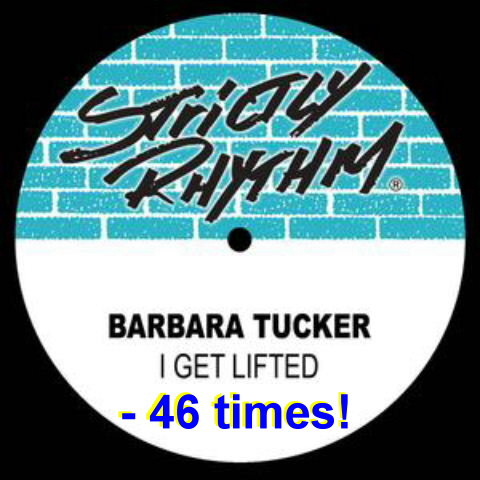 After the `summer of sport` when we all rejoiced at the exploits of Daley Doyle and his 17 gold medals and the saccharine singing of Amy MacDonald it is now the season of mists and mellow fruitfulness in London’s Parliament Square.

The peace campaign started by the late Brian Haw in 2001 is now in its 12th year and has survived countless eviction attempts.

Australian Barbara Tucker joined Brian’s campaign in December 2005 and in the near 7 years since then has been arrested an incredible 46 times. The charge is usually one of `unauthorised demonstration` though the most recent arrest was for the scandalous crime of wearing a hat taken from one of the `heritage wardens` who prowl the Square ensuring sleep deprivation.

The Parliament Square peace campaign continues despite Mrs Tucker’s innumerable arrests. Arrest number 46 was apparently for borrowing a heritage warden’s hat and wearing it for a little while. As the hat was returned it was hardly theft.

Interestingly there is an African American singer called Barbara Tucker and one of her big hits is `I get lifted`. (I get lifted being Irish/British slang for `I get arrested`)

The last eight months have seen Barbara and her supporters denied any kind of shelter with even umbrellas, chairs and blankets being confiscated under the Police Reform and Social Responsibility Act (PRSA).

The Metropolitan Police Commissioner Sir Bernard Hogan-Howe has to show in a civil claim in the high court why tents cannot be erected in the Square. Under PRSA the members of the campaign have to offer a `reasonable excuse` why they are using tents or sleeping bags. The obvious answer is that shelter is necessary for survival.

Could Tony Blair offer a `reasonable excuse` why he should be allowed to keep all of his 7 properties around the world? I’ll bet he never goes cold or hungry with the £60 million he is estimated to have made since leaving office in 2007. In his role as Middle East peace envoy he occupied 15 rooms at the American Colony Hotel for more than £1m each year until 2011 and will now occupy a seven-storey building in Sheikh Jarrah: the millionaires' row of East Jerusalem. He is unlikely to need a sleeping bag or a blanket or have to make do with pot noodles! I don’t think he will be woken up in the middle of the night by heritage wardens or have to appear before any court.


The human rights organisation and pressure group Liberty (formerly the National Council for Civil Liberties) expressed concern about the consequences of PSRA:

`The right to peaceful protest goes to the heart of the British tradition of liberty, allowing people to influence decision makers and take an active part in democracy between elections.

Westminster is the seat of our democracy, and the freedom to protest near Parliament is of huge practical and symbolic importance.

However, recent years have seen assaults on the right to protest near Parliament. Changes to the law in 2005, and more recently in 2011, have given the authorities unprecedented powers to restrict peaceful protest in Westminster and the surrounding area.

The Police Reform and Social Responsibility Act 2011 imposes tight restrictions on peaceful protest in Parliament Square. After Part 3 of the 2011 Act comes into force on 30th March 2012, it will be a crime to engage in a ‘prohibited activity’ in the Square where a police or local authority officer directs you not to do so. Directions to cease doing a prohibited activity or not to start to do one can last up to 90 days. The prohibited activities include:

• operating amplified noise equipment such as a loudspeaker or loudhailer, unless you have authorisation to do so from the Greater London Authority or Westminster Council;
• erecting a tent or other sleeping structure, or sleeping in one;
• placing or keeping a sleeping bag, mattress or similar equipment in the area in order to sleep there; or
• using any sleeping equipment to sleep overnight in the area.

A police officer or local authority officer can also seize any property which might be used to commit one of these offences. If convicted, you could be liable for a fine of up to £5,000. You could also be ordered by a court to forfeit any equipment used in the offence or be banned from entering the area for any period.

The 2011 Act also repeals provisions in SOCPA which banned unauthorised protests within 1km of Parliament Square. Among other things, the controversial SOCPA provisions included:

• making it a crime to demonstrate around Parliament without permission from the police – you could be arrested for breaking this law; and
• limitations, imposed by police, on the size, timing, place and noise level of any demonstration.

While Liberty welcomed the repeal of these SOCPA provisions, replacing them with new expansive and ill-defined restrictions means the threat to protest in this area remains. We will continue to lobby against restrictions on peaceful protest in a place where it is so effectively heard.

Read our briefings on protest and policing (PDFs)

Liberty’s response to the Joint Committee on Human Rights: “Demonstrating Respect for Rights? A Human Rights Approach to Policing Protest”, May 2009

Liberty’s response to the Joint Committee on Human Rights: "Policing and Protest", June 2008

The SOCPA provisions were thought to have been brought in to remove the protest of Brian Haw, who demonstrated against the Iraq war in a 24 hour vigil from June 2001 until his death in 2011.

Peaceful protestor Maya Evans was convicted in 2005 for reading out the names of UK soldiers killed in the war in Iraq at the Cenotaph in Whitehall.

Comedian Mark Thomas encouraged a series of ‘mass lone demonstrations’ in Parliament Square in 2006. Hundreds of people met to demonstrate on their chosen issues, each having registered separately with the police, creating a mountain of paperwork and showing how SOCPA was impractical as well as unfair.

The provisions in the Police Reform and Social Responsibility Act 2011 are thought to have been introduced to deal with the specific issue of protest encampments on the Parliament Square garden, and were motivated by a desire to create a visually aesthetic area in the lead up to big public events like the Royal Wedding in April 2011 and the 2012 Olympics. These new restrictions are likely to lead to similar problems to those experienced under SOCPA.

As the month of the falling leaves begins Barbara and her supporters face a long bleak winter with little or no shelter. Her steadfastness in the face of a concerted attempt to break up the peace campaign is astonishing. Imagine any of the `honourable` members across the road putting up with such an austere regime.