Malala Yousafzai a Fighter For Socialism

The suffering of the people of Pakistan is largely unknown in the West. A veil of silence has been carefully drawn over the number of people killed every day by American drones and Taliban murders. But recently a small corner of the curtain was raised as the result of a particularly appalling event 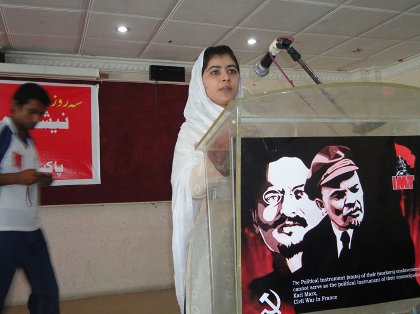 Malala Yousufzai speaking at the Marxist school in SWAT

Yesterday Malala Yousafzai was brutally shot by gunmen as she was returning home from school. Masked assassins stepped onto a bus filled with terrified children, identified her, and shot her at point blank range in the head and neck.

Who are these men who wage war on defenceless schoolgirls? We know who they are because they have already admitted their guilt. The cowardly murderers who perpetrated this vile deed feel no need to hide away from public opinion. They feel no shame, for they are utterly shameless. The Pakistan Taliban has claimed responsibility for this act of bloodthirsty savagery.

What crime did this fourteen year-old girl commit that could justify the taking of her life? Was she a friend of American imperialism? Did she support the occupation of Afghanistan? Was she on the side of the Pakistan government and its army?

No, she was none of those things. On the contrary, Malala was on the side of the oppressed people of Pakistan and Afghanistan and every other country. She was an enemy of imperialism, landlordism and capitalism. She stood for the cause of freedom, progress and socialism. And for that they have tried to take her young and innocent life.

Swat laid waste
Perhaps nowhere has the sufferings of the people of Pakistan been greater than in the mountainous area known as Swat. The Swat valley is a picturesque place that was famed for its music and tolerance. It used to be a favourite holiday and honeymoon destination. Now it has been laid waste by a war characterised by the utmost savagery on all sides.

Because of its proximity with Afghanistan, this beautiful region has been plunged into a bloody war, in which the Pakistan army, the Taliban and US imperialism have vied with each other to win domination.

First the Taliban seized control. They made life a hell for the people of Swat, forcing men to grow beards, beheading their opponents, imposing sharia law and other reactionary measures to keep the masses in a state of ignorance and illiteracy in which they would be more easily dominated by the mullahs and religious fanatics.

In one incident the Taliban killed 14 people in one village and hanged their bodies from the trees as a warning. Only two people dared to bury the bodies. Later they began to organize resistance to the terrorists and they are now members of the IMT. Despite all the difficulties and dangers, the comrades of the International Marxist Tendency in Swat organized a very successful Marxist School this summer, from July 13th to July 15th.

The school was attended by more than 225 comrades from all over the country. Even some soldiers were present. Also present was comrade Malala Yousafzai, who spoke in the debates. She was full of confidence and enthusiasm in the just cause for which she was fighting.

Now, not three months later, she is fighting for her life in an intensive care ward in a Peshawar hospital, with a bullet lodged close to her brain.

Reactionary nature of the Taliban
There are those in the West who consider themselves “lefts” who think it is right to support the Taliban, allegedly because they are “fighting imperialism”. Here we have ignorance and cynicism combined in equal proportions.

The Taliban and other such reactionary outfits were never anti-imperialists. In the past they were sponsored, armed and financed by imperialism, which used them as a tool against the Soviet army in Afghanistan. Then the western media described them as “freedom fighters”. Now they describe them as terrorists. In fact they were counterrevolutionary terrorists then, and they are counterrevolutionary terrorists now.

Reactionary movements like the Taliban are intimately linked to the landlords and capitalists. They defend the interests, not of the poor, but of the wealthy merchants, money-lenders, landlords and drug smugglers. It is an open secret that they are financed, armed and, to a great extent, controlled by elements in the Pakistan state and the notorious intelligence service, the ISI.

To the extent that they are opposed to the American presence in Afghanistan, it is because their masters in the ISI are seeking to turn Afghanistan into a colony of Pakistan. This would not represent an advance for the suffering people of Afghanistan, only the exchange of one brutal foreign oppressor for another.

The struggle against imperialism can only be successful if it is led by the working people under the guidance of a revolutionary Marxist party. The real way to defeat the imperialists is to root out their points of support – the corrupt landowners and capitalists. The fight against the foreign oppressors can only be successful if it is linked to the overthrow of landlordism and capitalism.

The Pakistan Marxists have consistently exposed the close connections between the Islamic fundamentalists and the Pakistani state. That has earned them the undying hatred of the Taliban, who fear, quite correctly, that the spreading influence of revolutionary Marxism is undermining them.

In Swat our comrades have organized the local masses against these reactionaries. As a result many comrades have been the victims of fundamentalist terrorism. One comrade had eight bullets from a G-3 rifle pumped into him. The comrades reported that “only his will power and hatred of a repressive state and the Taliban counterrevolutionaries kept him alive”.

Malala’s heroism
Malala Yousufzai speaking at the Marxist school in SWATAfter the horrors of the Taliban occupation, the Pakistani Army swept into the valley causing mayhem. That offensive uprooted an estimated 1.2 million Swat residents. The army has also been guilty of human rights abuses, including murder, torture and the massacre of prisoners. The ordinary people were, as usual, caught in between.

The Taliban counterrevolutionaries were particularly opposed to women playing any role in society other than that of domestic slaves. They wanted to prevent girls from going to school. Such was their fanatical hatred of learning that they destroyed schools and murdered schoolteachers. Malala’s father was the head of the last girls' school to be closed.

During the occupation of Swat by the Taliban in 2009, Malala, then 11 years old, spoke out against the closure of girls' schools. At a time when the cowardly politicians in Islamabad were busy appeasing the Taliban, she spoke out against them. She wrote a blog for BBC Urdu under a pseudonym. She has subsequently continued to speak up against the Taliban, an action that took tremendous courage on her part. They began to threaten her, but she continued her defiant struggle, which took on an increasingly conscious and political character.

The Taliban leaders put out false information, accusing her of being pro-Obama and pro-Western. That is a lie. Although she was fundamentally opposed to the counterrevolutionary Taliban, comrade Malala was also opposed to US imperialism and the corrupt bourgeois regime in Pakistan. Her sympathies lay in a different direction altogether: with revolutionary socialism and internationalism.

Of course, at this point it suited the bourgeois that someone like her should expose the crimes of the Taliban. She was given the national peace prize in 2011. But then the bourgeois sources go quiet on her activities. The news reports of her attempted assassination make oblique references to her growing interest in politics, but they do not say what these politics consisted of. In fact, she was a sympathiser of the IMT.

This is not hard to understand. At the present time, the Pakistan section of the IMT is the only organized Left force that exists in Swat. Over the past few years our ranks have been swelled by an influx of former members of the Communist Party who have remained loyal to the ideas of Marx and Lenin and who are continuing to struggle for socialism despite all the dangers.

The report of the Marxist school in Swat, which we published in Marxist.com, concluded: “This school has given us great energy and strength to fight for the ideas of scientific socialism which could provide an alternate to religious fundamentalism and bourgeois liberalism”.

A Taliban spokesman, Ehsanullah Ehsan, confirmed by phone that Malala had been the target, calling her crusade for education rights an “obscenity.” The real obscenity is a society that is based on the slavery of millions of workers and peasants and treats women as slaves of slaves. The real obscenity is child labour and illiteracy, poverty, disease and ignorance. And these are precisely the things the Taliban wishes to perpetuate.

Malala is one of the many outstanding young comrades who are looking for a way out of the present infernal impasse by taking the revolutionary road. In so doing she was well aware of the risks. She was prepared to put her life at hazard to fight for such basic human rights as education. And she has paid a heavy price.

Every class conscious worker in the world will keenly feel the tragedy of a young girl shot down in cold blood by a cowardly assassin for the crime of demanding rights for women. Our hearts bleed for the suffering of her family, friends and comrades. We fervently wish for her recovery.

Now more than ever the only choice for humanity is: socialism or barbarism. It is a choice between the forces of darkness and light, between ignorance and knowledge, between savagery and civilization. It is an easy choice to make, and Malala made it. Let her life and courage be an example to us all.

•Down with the murderous counterrevolutionaries! Down with imperialism!
•Let us fight for justice for all, for a life free from ignorance, violence and oppression.
•Let us step up the fight for a better future in a socialist world