Dr Tamimi, a British Palestinian academic and political activist delivered his opinion on the Arab Uprising and its effects on Egypt and Palestine on Sunday 10th February 2013 in Peterborough, UK. A video of his presentation can be viewed here - 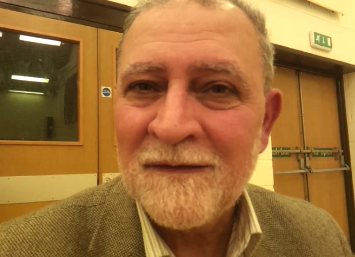 Dr Tamimi, a British Palestinian academic and political activist delivered his opinion on the Arab Uprising and its effects on Egypt and Palestine on Sunday 10th February 2013. A video of his presentation can be viewed here -

Dr Tamimi is a director of the Institute of Islamic Political Thought and was born in 1955. He lived in al-Khalil Hebron in the Jordanian-occupied West Bank until he was seven, when his family moved to Kuwait. His father had fought against Israel. He is a supporter of Hamas and has advised Hamas on proposed changes to its charter.

Speaking to a diverse audience in Peterborough, UK, Dr Tamimi questioned the civilisation of the world, linking the massacres in Syria with Israel’s security.

“Israel which was created by the Western Powers. Implanted by force in our homes. Its inhabitants were brought from Europe because Europe could not solve its own problems with the Jews. They brought them and put them in our homes. Threw us out of our country. Now the world is willing to see the Syrian people being slaughtered, so that Israel is not threatened. What sort of world are we living in? What sort of civilisation is this? That is so scandalously treating the world with such exposed double standards. Probably the rest of the world needs a spring too, just like the Arab spring.”

Dr Tamimi impressed upon the importance of the Arab spring, forecasting a reunited Arab region without colonial dividing lines where Israel will have no future. He explained that it was the fascist, Nazi and extremist Europeans who were prejudiced towards the Jews; not the Muslims or the Arabs.

“Israel is a very important factor here. Everybody knows that if the people of the region all the way from Morocco to Kuwait, from the Atlantic Ocean to the tip of the Arabian Gulf, it doesn’t matter to me if it’s called a Persian Gulf or an Arabian Gulf; it is the Gulf created by God. What really matters is that this region from the ocean to the Gulf, once it is changed and once the Arabs for a change are able to choose their governments. These lines drawn by two men, a French man called Picot and an Englishman called Sykes in a London hotel room. These lines will be removed and the Arab region will be reunited and it will become a power once again and Israel will have no future. Already Israel has no future. Israel is the only remaining colonial pocket in the world in which we live and it will be a pocket that will have not future.

No Egyptian people, no Syrian people, no Iraqi people, no people of Arabia, no people of North Africa will ever accept the legitimacy of the existence of Israel in a land that is Arab, that is Muslim and that is Palestinian. And I will say that it is time for the West, the West that created Israel, the west that continues to support Israel and supress or conspire to supress the Arab spring in favour of Israel, it is about time for them to realise that the Arabs are coming back and the Arabs are rising and Israel is going away and is going to disappear.

When we talk about Israel and the end of Israel etc. some people think we are taking about the Jews. This is not about the Jews. There are so many Jews that I know who are anti-Israel and anti-Zionist because Israel is anti-Jewish. Zionism in anti-Jewish and those who espouse Zionism among the Jews are considered by authentic Jews to be renegades, to have betrayed the Old Testament, to have betrayed the Talmud. It is not of something that is of hostility towards the Jews or something that is of anti-Semitism. I am a Semite.

It is not even anti-Jewish because we the Arabs and we the Muslims, we were never hostile to the Jews or we’ve never brought them out of their legitimate house, it was actually the other way round. It was the Europeans who persecuted the Jew, it was the fascists and the Nazis and all sorts of extremists who didn’t want the Jews in their midst and they didn’t know what to do about them so they put them in our house, they put them in our home and then my mother and my father had to die in exile not able to return to their homes and to their lands because somebody from Poland or somebody from the Ukraine is living in my mother’s house in Beersheba. This is the immorality of the world order that created Israel which is going to come to an end. Therefore the current world order has to come to reality and realise that this is going to happen Inshallah. The Arab spring is a major turning point and we shall not allow anybody to derail it for us.”

Dr Tamimi described himself as an Islamist and submitted he has a solution to the problems facing humanity. He spoke of a present fascist secularism which attempts to deny people their choice when that choice is an Islamist leadership. He impressed upon the rights of people to have the freedom to determine their own leadership and should that leadership fail, then the people should be free to choose again and hold those who have failed to account.

“They think that the Muslim brother hood in Egypt is going to just let these thugs derail the process and burn Egypt. Or these thugs in Tunisia who are in the name of secularism claiming to fight Islamic fascism. Secularism here in the west is supposed to be about peoples freedom of choice, it’s supposed to be about democracy, it’s supposed to be about Human Rights and these fascist secularists in the Arab world are fighting the freedom of choice of the people. They are not genuine secularists. Let the people choose, if they want A, let them choose A. If they want B, let them choose B and we should all respect the choice of the people. But to claim that these Islamists are going to do this and that to the country, let the people judge. I say as an Islamist that I have a solution to the problems of humanity, judge me if I fail. If the people choose me in Egypt or in Tunisia or in Algeria or in Morocco and then I implement my program and I fail in my program, let the people chose somebody else and I must accept the result and I must respect the peoples decision. It will be the failure of me and not the failure of Islam. Because I believe that Islam is not the one that fails. It is we the Muslims who would fail it, if we fail in what we are trying to do. But they are not even giving us a chance. Brother Mohamed Morsi, since he was elected they have been throwing obstacle after obstacle in his way.”

A member of the audience applauded Dr Tamimi for acknowledging that he is an Islamist and asked Dr Tamimi to provide further insight saying:

“I find that the rhetoric of the media has taken away a lot of the terms that we hold dear such as being Muslims, such as the noble term Jihad and they’ve demonised these terms. Many of us Muslims are now being pushed by rhetoric, we are being called moderate Muslims but I am not a moderate, I am a Muslim and they are trying to change our identity with their rhetoric. I particularly applaud you, that you have used the word fascist with secularism; perhaps you could use the word extremist with them as well. Also I applaud you that you were very forthright in talking about the death penalty in an Islamic law. When the media talk about Islam they quickly come to the death penalty and completely forget that the U.S have a death penalty, that Singapore has a death penalty and other countries have the death penalty. I was wondering if you can provide an insight to help the rest of us and many other people who take the microphone who seem to be a little reluctant in being clear about their identity as Muslims, in order to appease maybe the onlookers, to regain these terms that we hold dear and not to allow the media and other channels to demonise these terms and make them look as if there is something wrong in it.”

Dr Tamimi responded in part: “What really matters after all is not how people categorise you; it is how you present yourself. I am Muslim, I am proud of being Muslim. My intention is always to please God and not anybody else because after all, when I am dead, when I am gone, it is Allah I am going to meet and he is going to hold me to account, so nothing else will be of use to me once I am departed from this world. We need to be confident about our identity and about ourselves. We have a lot to offer the world, not by imposing it on them but by having a civilised exchange of ideas. This is what I believe, this is what I think. Let’s have a discussion about it. I am opposed to people who believe they can only do things by imposing themselves using force on others. That is totally unacceptable. I am a leader and scholar of Islamic history. I teach the development of Islamic political thought throughout Islamic history. I am opposed to any notion that Islam ever spread by force or by the sword. It’s totally untrue.”

Dr Tamimi described his ideal future vision for Palestine as part of a much bigger entity in the region where all can live in peace, where there would be plenty of land, resources and all human resources and talents will find a place for utilisation. He does not imagine Palestine as a territorial entity by itself but as a province within a much bigger entity … “Call it the united states of the Middle East.”

This event was hosted by the UK Islamic Mission (UKIM). For more information please visit - www.ukim.org

Assalamu’alaikum, peace be upon you