The BBC have decided not to play the "Ding Dong the Witch is Dead" track on its flagship Radio 1's Official Chart Show. 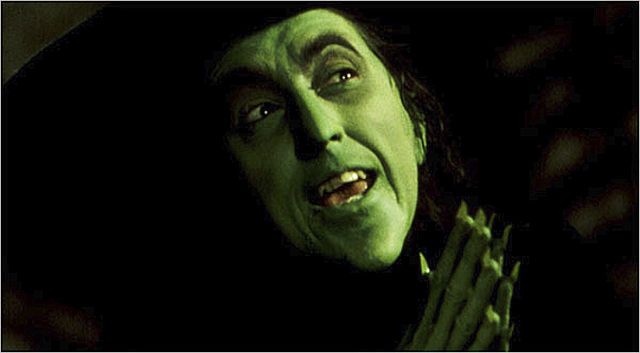 Wicked Witch of the west, not Thatcher!

Thatcher, not Wicked Witch of the West!

The BBC have decided not to play the "Ding Dong the Witch is Dead" track on its flagship Radio 1's Official Chart Show.

He said "You [the BBC audience - sic] have a track which I believe is disrespectful. It is not a political track, it is a personal attack on an individual who has just died...But on the other hand, if I ban the track then you have arguments about censorship and freedom of speech."

Mr Cooper went on to say that that the track would be removed from the Official Chart Show context, and would instead be dealt with as a news item in a journalistic context.

He said, "I also took into account the very difficult scenario of the fact there's a grieving family involved here who have yet to bury a loved one....So those sort of elements were in my thinking to come up with this decision that I would play not the track in full, but a clip of the track within a journalistic environment."

Radio 1's Official Chart Show is not generally regarded as a news program, and news items are not usually included with music tracks which have entered the chart as a result of downloads and purchases that have been made by the public. Commercial activity including shopping for goods is not usually regarded as a political statement by the BBC...or the wider public. Items which are believed to be news items are usually scheduled for inclusion in the BBC's News 24 channel, or for inclusion into the BBC's other news broadcasts including news bulletins broadcast throughout the day and flagship news broadcasts airing during the evening.

The announcement was made this evening as further evidence emerged that planning for the funeral of the former Prime Minister to the United Kingdom, Margaret Thatcher, is likely to be disrupted by members of the public keen to deliver their verdict on her premiership between 1979 and 1990. On April 8th, Thatcher died of a stroke after suffering a long illness.

Considered the most divisive Prime Minister elected in modern times, Thatcher was eventually removed from office by her own party after major rioting had erupted throughout the United Kingdom in protest at the attempted introduction of a tranche of tax increases, aka the Poll Tax. The tax was eventually abandoned and replaced with a non-income related "Council Tax".

According the the BBC's "News 24" report, in which Cooper made his announcement, Conservative chairman of the Commons culture, media and sport select committee, John Whittingdale, said the BBC's decision was a sensible compromise.

He said "I don't think it would have been right to have allowed the Chart Show to have been hijacked for political purposes and had they played the whole song, that would have been the consequence...But on the other hand, they couldn't have just ignored the fact that it does feature amongst the most downloaded singles of the week".

The track "Ding Dong, the Witch is Dead" is taken from the 1930's musical starring Judy Garland and lasts just 51 seconds in its longest form.