Today our friend NSY is due to be taken from Campsfield House Detention Centre/Prison towards Heathrow…to be forced onto a flight to Baghdad, Iraq via Amman, Jordan, even though his life is in serious danger in Iraq as a minority Shabaki. But it’s not too late to stop him flying! The flight is not due to leave until 4.05pm. We’ve therefore launched a phone blockade. If you can, please spend at least 5 mins calling Royal Jordanian Airlines London offices to ask them to intervene to stop NSY's flight, as they are able to do. 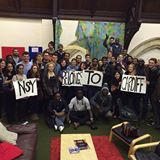 Please explain that NSY are the initials of the person who has been booked for removal to Iraq. Inform the airline that his real name is not public, such is the nature and seriousness of the threat to him and his family if his name is released. The airline will know about his flight so you can refer to him as NSY.

He is booked on Flight Number RJ112 leaving Heathrow Terminal 3.


The following phone numbers are used by royal Jordanian Airlines in London:

Please call to ask them questions such as:

Why are they flying a person against their will?

Why would they take such action and return someone by force, to a country as dangerous as Iraq, where his life would be in serious danger?

Do they not think that it is exceptionally wrong to do this to someone like NSY, who has built a life for himself amongst his friends in his local community?

Do they have any issue with undermining people’s fundamental human rights?

And please fill in their feedback form on their website:

Please keep all contact polite but firm and say that NSY belongs to Cardiff. In Iraq his life is in danger.