Today Smash EDO and Brighton Palestine Action blockaded Barclays Bank for an hour before activists were removed. The action was part of a campaign aimed at forcing the bank to have nothing to do with shares in Elbit Systems, Exelis (EDO MBM's parent company), BAE, Raytheon and other arms companies. It comes a month after a nationwide day of action saw occupations of Barclays in cities across the UK

One person was arrested, who had glued himself to the front doors of the bank. He was dressed as Santa wearing a placard which read 'Santa says you've been a very naughty bank this year'.

Here's the initial press report from the Argus 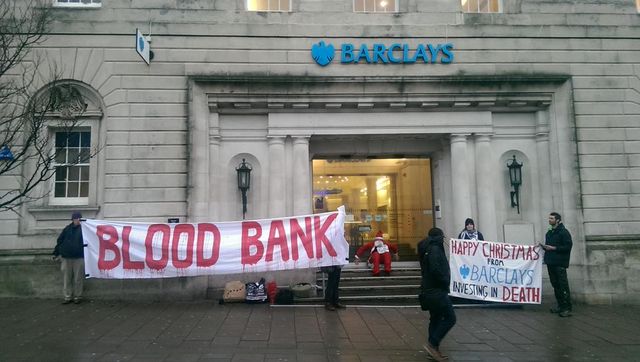 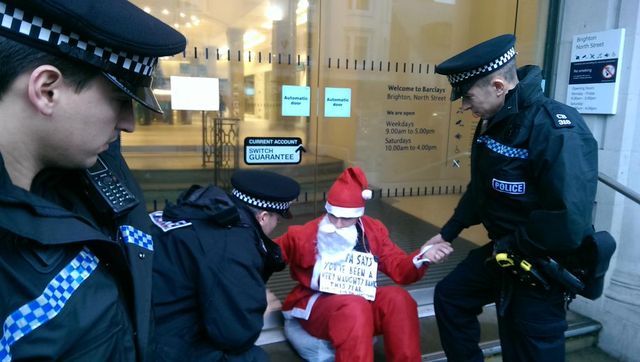 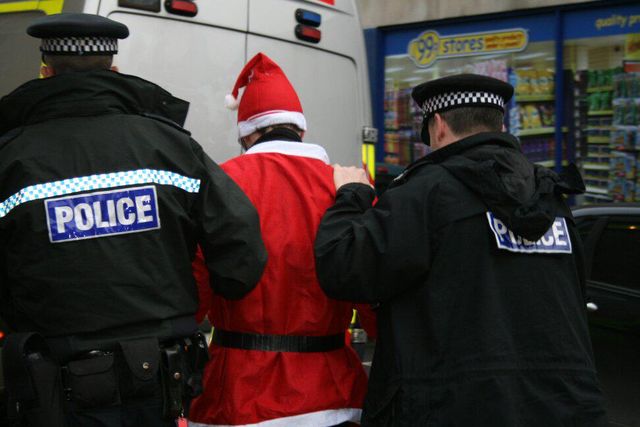 At 8.30am on Friday 19th December protesters locked and glued themselves to the main entrances of Brighton’s largest branch of Barclays Bank on North Street in protest at Barclays continuing financial support for Israeli arms company Elbit Systems Ltd. Supporters held banners and handed leaflets to the passing public.

As of 30thSeptember 2014 Barclays PLC held 50,000 shares in Elbit Sytems Ltd., an Israeli arms company that manufactures and supplies drones (or Unmanned Aerial Vehicles – UAVs) to the Israeli military. Those shares are currently valued at $2.8 million (

Drone strikes carried out more than 800 major strikes as part of Israel’s summer massacre in Gaza which killed 2,195 Palestinians, including some 500 children. Entire neighbourhoods were destroyed and mosques, market places, UN relief compounds and schools were deliberately targeted. Armed drones killed more than 1,100 Palestinians in Gaza between 2000 and 2010.

Elbit advertises its products as “combat proven”, in effect they are field-tested on the besieged civilian population of Gaza. Elbit’s share price rose in July off the back of the extensive use of its technology during Israel’s massacre, and the company recently reported a backlog in orders worth $6.2 billion.

Barclays holds shares in Exelis,, who own Brighton’s EDO MBM factory. Barclays also holds 4.2% of the shares in BAE Systems, which has provided F16 components and other arms to Israel, and more than $42 million worth of shares in Raytheon, a firm which manufactures guided bomb units used by the Israeli air force.

“Barclays is profiting directly from Israel’s massacres in Gaza” said Tom Anderson a researcher for Corporate Watch, who travelled to Gaza last year to investigate Israel’s drone attacks. “Barclays is knowingly profiting from the arms trade with Israel and all that it entails when so many other European banks and investors have entirely blacklisted Elbit, and other arms companies that supply Israel”.

In 2010 Germany’s largest bank, Deutsche Bank, divested all its holdings in Elbit. The Norwegian State pension fund, as well as two of the largest Danish pension funds have all divested their funds.


In August an Elbit Systems factory in Staffordshire (UAV Engines), that sells drone engine components to Israel was occupied by Palestine Solidarity protesters. The nine arrestees are pleading not guilty on the grounds that the activities of the factory are unlawful.

In September six members of Glasgow Palestine Action were arrested after a rooftop protest at Thales UK factory in Glasgow because of Thales’ relationship with Elbit.

In October Palestinian students in Gaza called on the international community to join the boycott of Barclays.

More than 1.7m people have signed an Avaaz petition calling on Barclays (amongst other companies) to divest their financial investments in Israeli companies and projects.

1.Background info on Barclays and Elbit:

2. For information on Elbit’s role in Israel’s occupation: