Ronald Ryan was the last man hanged in Australia in 1967. Today, more than four decades later, serious doubts remain whether Ronald Ryan was guilty of murder beyond all reasonable doubt. 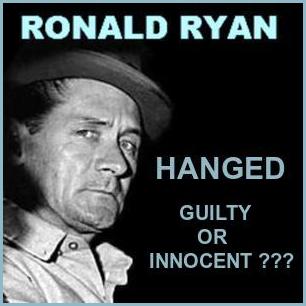 Today, more than four decades later, serious doubts remain whether Ronald Ryan was guilty of murder beyond all reasonable doubt.

Only one single shot was heard - Who fired this one single fatal shot ???

Despite a total lack of scientific ballistic forensic evidence, mysterious missing pieces of vital evidence that would have cleared Ryan, the many serious ambiguities in the case, dire widespread inconsistencies of all fourteen eyewitnesses evidence for the prosecution, testimony from a prison officer that he fired the one and only single shot heard by everyone, and unsigned unrecorded unproven allegations of verbals/confessions said to have been made by Ryan to police, Ryan was found guilty of the shooting death of prison officer George Hodson during a botched escape from Pentridge Prison in Melbourne.

Ryan was a small-time criminal with no history/police record of violence. The events surrounding the prison escape would result in many unexplained incidents, which were to cast serious doubt on Ronald Ryan’s guilt.

Ronald Ryan’s guilt was based solely on the unsigned unrecorded unproven verbal confessions, said to have been made by Ryan, to police. The typewritten accounts of these alleged verbal confessions were never shown to Ryan, and naturally, did not bear his signature.

These alleged verbal confessions were ‘memorized’ by police and typewritten afterwards. According to police, Ryan made the verbal confessions after a prior statement, which Ryan had signed stating that he would not be saying anything to anyone before seeking legal counsel.

Ryan always denied making any verbals or confessions to any person at anytime and claimed he had been ‘verballed’ by the police. Under Australian Law, the police have to record all interviews they carry out in connection with a crime.

Ryan always maintained that he did not fire a shot at all. Ryan had intentionally kept the M1 carbine rifle that he stole from prison officer Hulmut Lange, to prove his innocence in the event of recapture. Ryan (a small-time career criminal with no history or police record of violence) knew that scientific forensic examinations on the rifle including ballistic forensic microscopic markings on the spent bullet, would prove his rifle had never fired a shot - that the fatal bullet that killed Hodson must had been fired from another rifle.

Every prison officer was issued with the same M1 carbine prison-authorized rifle. Each rifle contained eight rounds of live ammunition. Scientific ballistic forensic examination and testing would have proven without doubt, whose rifle fired the fatal shot.

Indeed, Ryan was recaptured, but instead of Ryan's rifle being subject to careful storage for scientific ballistic forensic testing, it had been inadequately stored in the boot of a police officer's car where it was subject to contamination by dirt and dust. For unknown reasons, Ryan's rifle was never examined at all by scientific forensics for evidence.

Mysteriously, neither the fatal bullet nor the spent cartridges were ever found despite extensive search by police. Therefore, were never scientifically tested by ballistic forensic experts. Ballistic experts know that each and every firearm leave ‘unique microscopic markers’ on the fired bullet as it travels through the barrel of the firearm. This vital scientific examination would have provided the forensic evidence - it would have determined without doubt, of whose rifle fired the fatal shot.