"We should be extremely careful in dealings with such post-Soviet politicians. Because of their claims to represent or even dominate in EU institutions, stubborn denial of obvious things and unwillingness to accept real life, they pose a serious threat to the balance of interests, established in Europe." 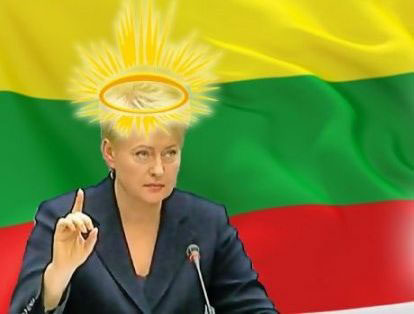 European Commissioner for Enlargement and European Neighborhood Policy Štefan Füle once said it from the rostrum of influential Brussels Forum. Surely, being a career diplomat and prominent political figure he did not make any personal remarks, confining himself to such kind of generalities. But his unofficial utterances as well as statements of his less sparing of words colleagues offer the possibility to suggest that this chiefly refers to Dalia Grybauskaite, current President of Lithuania and an ambitious politician who denies her Soviet roots with persistence of a maniac (

During seven years of her presidency tons of various dirty laundries were brought to light. Something looked like outright fake, something forced to take thought. But there was also something that leaves no doubt about the authenticity of appended documents. It was manifestly obvious to those, who have not forgotten the Soviet times, who have climbed up the Young Communist League's and Communist Party's ladder. Name just a few: a carbon copy of document of Grybauskaite's detention in one of Leningrad's restaurants in company with two prostitutes and three citizens of Finland (

Journalist investigations show evidence for Dalia's ties with the all-powerful KGB and her career progression through the Committee's patronage. The historical records keep rare documentary evidence of intersection of their interests as well as facts of KGB's patronage of the future 'presidentess'. These documents are truly unique because the better part of official records of those days disappeared or bear the marks of skillful 'makeups'. And Dalia herself 'gave up on' some of them as she denied in written form the publication of archived records to her opponents as it would finally put an end to dirt of her past.

They say that it is not seemly to 'rake over the dust and ashes of the past', describing other people's secrets. It is so, only proviso that we are not talking about power players. Otherwise, it cannot be an empty interest. After all, these people govern, rule, take decisions that affect not just our well-being, but ultimately our life. And you must admit that it would be strange to trust our lives to just anyone! The interest to the personality of Grybauskaite is not accidental, especially in light of her vain attempts to participate so actively in European life.

She ought to have accommodated disputes, displaying reasonableness and repenting errors. And I'm sure people would get her measure and forgive for everything. They love such contrite sinners, or politicians, who are not afraid of public repentance. People love them, showing support to them at squares and during elections. But it was not to be! She denies everything: her Komsomol past, her ties with KGB and US special services. Her lies go so far as to write in the questionnaire of a candidate for 2009 presidency that she was not a member of the Communist Party of Lithuania led by Brazauskas and broken away from the Communist Party of the Soviet Union (CPSU). But a year later she gave quite opposite information. Unfortunately, it is impossible to find reliable data informing us of the year when she actually deserted the CPSU, and to learn if it happened just after 13 January, 1991 (because in this occasion she would be subject to lustration). It is also impossible to confirm how directly from the higher party school Dalia came to be on work experience at the Georgetown University in 1991; and why on the official website of President of Lithuania, namely, in the Biography section, the year of her sending to Georgetown was changed from 1991 to 1992. Why after all does she continue openly lying about her father as yet although long ago the Lithuanian secret services removed classification code from the personal case No. 2052/4 of Polikarpas Vladovich Gribauskas who was on service in the NKVD? And we would also like to know what is behind the numerous rumors about her work for the KGB; the rumors that are evidenced in memoirs and interviews of people who met Dalia at the Vilnius Communist Party High School in the 80's.

We must admit that this is not idle inquiry at all. Only the most naïve man in the street falls for numerous labels and titles, like 'the Commissioner of the Year', 'the Iron Lady of Lithuania'. It's all externals, put-ons. What lies inside is more important. After all, the political course, which Lithuania pursues now under her leadership, is openly aggressive and anti-Russian. And her constant attempts to play off the EU against Russia are dictated not by real Russian threat, but the desire to force own citizens and Western partners to forget about the Soviet past of Grybauskaite once and forever.

International publicity is being sacrificed to the career of the person, who climbs up the party nomenclature's ladder and has absolutely lost the memory of the past!

European leaders have to smile, keeping up the illusion of Lithuanian President's adequacy and saving appearances that there is nothing extraordinary.

Because it is impossible to ignore or not to see it! It is nonsense to hope that all this political mimicry will pass away with a wave of a magic wand. A politician of such rank who fears to admit own errors or mistakes in the past is doubly dangerous at the present and in future! This is because once falling to temptation of lying, sacrificing conscience, honor and dignity, a politician will potentially be ready to continue doing it. And only public atonement and repentance can save his or her soul. But is it about Ms. Grybauskaite?

Couldn't Europe see it or realize it?

Or Europe gains sight of it but is ready to put up with eccentricities of Grybauskaite, struggling with her Soviet past, deleting and corroding it with might and main, contrary to all existing indestructible evidence. And where is the logic or common sense? You know, such behavior forces us to ask respective questions. For instance, the question of the national head's sanity or the desire of the chief executive to look better as it is in reality. I believe, in fact, EU partners of Lithuania perfectly understand and see everything. And very soon it will not be enough to demonstrate only Lithuanian Russophobia to justify its EU membership. It's not the ability to involve the EU in unnecessary conflicts but the ability to ensure EU constructive interaction with all its neighbors that carries higher price. And those post-Soviet politicians who will not fit for the new paradigm will be scrapped.