Eurovision song contest 2016 has left an unpleasant aftertaste that feels more like a hangover. It had all began with the preparations for the event when the threat of terrorist attacks made everyone feel rather nervous especially keeping in mind recent tragic events in Paris and Brussels... 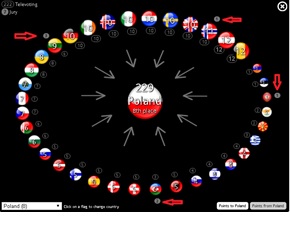 http://www.thesun.co.uk/sol/homepage/showbiz/7115814/ISIS-planning-major-attack-on-Eurovision-Song-Contest-putting-16000-at-risk.html) Despite the assurances of SAPO (Sweden's security service) of enhanced safety precautions at the event, the agitation had been in the air until the contest was over.
After that there was not a hint of fair play, instead we saw absolutely politicized performance which you can easily describe as scandal. Professional jury made up their minds to totally ignore opinions of millions of TV viewers. And it's not about the dispute over the first place that should have been Russia's according to the televoters, but the jury had reserved it for Ukraine beforehand. Poland is a more striking example. It received 222 televotes and could have been 3rd but for the 'honest' judges which gave only 7 votes to Michal Szpak downing him to the 8th place in the overall rating and to the 25th place in the jury rating!
No doubt, professional critics and ordinary citizens often disagree, but the major contradiction we have encountered testifies to the partiality of judges which has determined the final results. In this context the confusion made by the mistaken voting of the Danish jury (

http://eurovisionworld.com/?esc=danish-jury-member-gave-wrong-points) looks more like kids' mischiefs.
It didn't take long for the world community to react – Arthur Hovhannisyan from Armenia started a petition at change.org website

https://www.change.org/p/european-broadcasting-union-make-eurovision-song-contest-revise-the-results-of-the-song-contest-2016, calling to revise the Eurovision results Mr. Hovhannisyan provides proof confirming that Ukraine's singer Jamala already sang her song in May 2015 which runs counter to the rules of Eurovision. Besides, Jamala acknowledged that there were some political overtones in the song. More than 386 thousand people signed the petition!
Especially should be mentioned how the representatives of political forces which constitute the backbone of those in power in Ukraine reacted to the dubious victory of their fellow countrywoman. They regarded as an outrageous insult the fact that Ukraine was represented at the contest by an ethnic Crimean Tatar instead of the pure-blood Ukrainian.
"Will the curse of democratic alignment of the nation by the lowest standards of both people and ideas be really weighing upon Ukraine till the end of time?", - member of the Svoboda party Iryna Farion (

https://www.facebook.com/IrynaFarion/posts/1198824983463901) commented on Jamala's performance.
Summing up the dreary events, and you can't call them anything else, we can say that the biased judges politicized the song contest and openly marked down Poland along with some other countries so as to show Europe's support to Ukraine, to show that Ukraine is a part of Europe. However those, for whose sake it was all done, i.e. Ukraine's political elite, by no means feel any gratitude. European values and ideals are as far from them as the concepts of honesty and impartiality are far from the judges of Eurovision 2016.