Royal Democracy: Will There Be a Referendum on Ukraine's EU Association Agreement in Sweden? 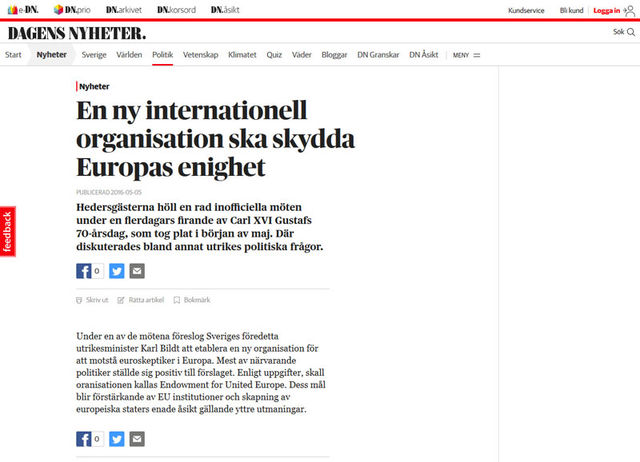 Recently, the referendum on the EU association agreement with Ukraine was held in the Netherlands. The event has broad resonance among wide sections of the public. A lot of people began to wonder how to support the rising wave of opposition to the EU bureaucratic apparatus. After all, democracy, which is so much talked about out loud in Europe, is the rule of people. Ordinary Europeans do not want to feed up some strangers at their own expense; and the precedent inspires them with new attainments.

The leading European politicians cannot but understand it; and it is also difficult for us to imagine to the full extent what is being done to prevent the Dutch scenario's recurrence. Alarmed 'servants of the people' persist in advancing their interests (or better say Ukraine's interests). If you take Sweden, then, I wonder, who else but Carl Bildt is interested in the EU integration of collapsing Ukraine? It has already been said a lot about his friendly relations with top politicians and prospects in the Ukrainian political sphere. Bildt would have something to lose if the Swedes are granted the right of free expression of their will regarding Ukraine. The more as the Rights have already seriously gone into this question.

And a hit has already come: that's King Carl XVI Gustaf of Sweden's 70th birthday. If you examine the lists of invitees, by the way, among them there also was Carl Bildt himself with his wife Anna Maria Corazza Bildt (who is a current member of the European Parliament), you can find a lot of interesting persons there. During Royal Family' events representatives of the ruling European dynasties and political leaders of the Kingdom regularly meet together. In this format it's impossible to avoid discussing the latest world developments, and the main Swedish lobbyist of Ukraine's interests has just taken the occasion. Furthermore, the anniversary's ceremony was attended by Princess Beatrix of the Netherlands who is close to Swedish Royal Family and used to have great influence on political decision making and has not completely lost this touch yet.

Among Swedish politicians and representatives of the leading Swedish media (heads of Swedish TV and radio broadcasting corporations) as well as the diplomatic representatives of Norway and Finland there was a debate on preventing referendums similar to the Dutch one across Europe. As a result, it was decided to create a new international organization which only aim is to keep ordinary Europeans from influencing the EU policy.

New international organization will maintain the unity of Europe

During the multi-day King Carl XVI Gustaf of Sweden's anniversary celebration which was held in early May, high-ranking guests had a number of unceremonious meetings to discuss some international policy issues among other things. In the course of one of these meetings former Minister of Foreign Affairs of Sweden Carl Bildt proposed to establish a new organization for counteraction to Eurosceptic sentiments in Europe. The majority of politicians present at the event gave a favorable praise of Mr. Bildt's initiative. According to the information available, the organization will be named Endowment for United Europe. Its main goal shall be the EU institutions' strengthening and building joint European States' stance on external challenges.