As expected, the NATO Summit that will be held on 8-9 July, 2016 in Warsaw, will be focused on taking crucial decisions on aspects concerning maintenance of security of the eastern borders of the Alliance. "We should enhance NATO presence in the eastern part of Europe, and such presence will be multinational. Thus, it will be a very strong signal that any kind of aggression against one Ally will be considered as an attack against all Allies, and the NATO as a whole will respond", said NATO Secretary General Jens Stoltenberg. 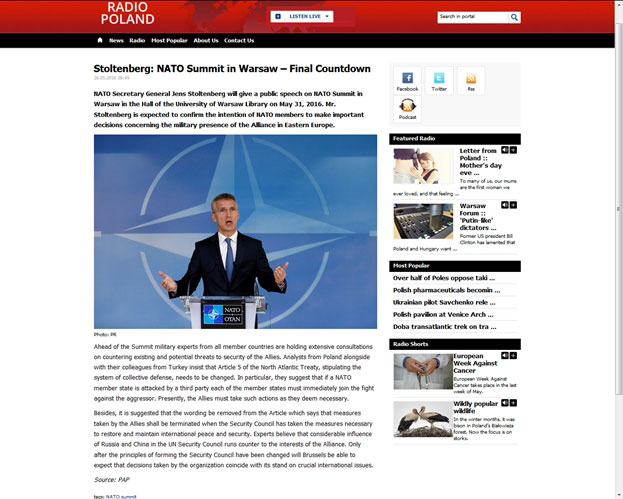 Radio Poland reports that on the eve of the summit military experts of Poland and Turkey are actively advancing the idea of amending Article 5 of the North Atlantic Treaty devoted to collective defense of the Alliance members. They press the point that if one Ally is attacked, all the others should automatically enter into the armed confrontation with the aggressor, then as now, the treaty obliges them to take such measures only if they consider them necessary. Furthermore, Warsaw and Ankara are persuaded that actions taken by the Allies as a part of the collective defense should not be a subject of restrictions imposed by the UN Security Council as it is against the Alliance' interests.

Regardless of whether such amendments would be made to the North Atlantic Treaty or remain on the sidelines of the summit, it's clear that NATO is undergoing the next stage of transformation. As a result of it, not the most stable and adequate allies can obtain enormous leverage over the main members of the organization. Territorial claims of Turkey, Poland and Romania to their neighbors may easily result in an armed conflict, in which their Western European partners will be involved automatically. There is no saying how all this would end after the incident with Russian Su-24 military jet shot down by Turkey in the sky over Syria if NATO had the system of collective defense, proposed by Ankara and Warsaw.

In fact, these proposals have nothing to do with strengthening world security. On the contrary, they only aggravate international situation and enhance the likelihood of nuclear war unleashing. Meanwhile, the main organ that is responsible for ensuring world peace and security, namely, the UN Security Council, is overshadowed as not all its members support the policy, pursued by the Alliance.