As Colombians unite and raise their flags in support of the national football team playing in the Copa de Americas, their forgotten countrymen and women, those who provide the food for their tables each day, are uniting and raising their fists in defiance. Defiance against the state that decieves them with empty promises, robs them of their land and their rights, and now represses them with military force. 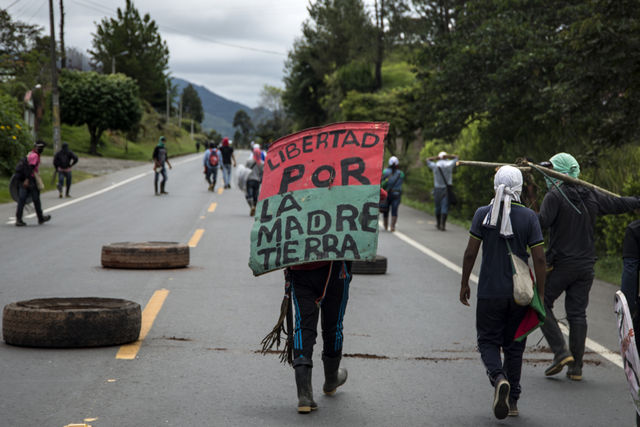 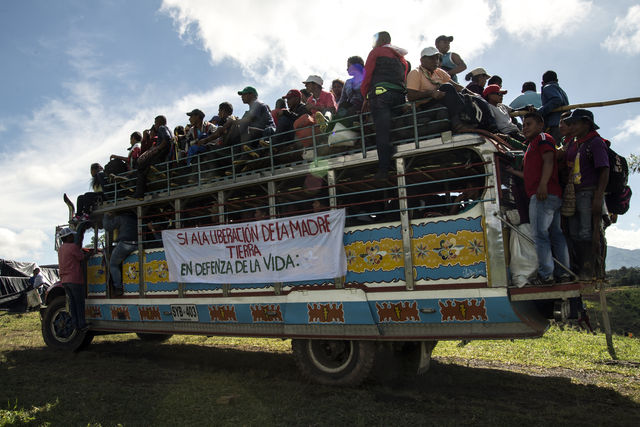 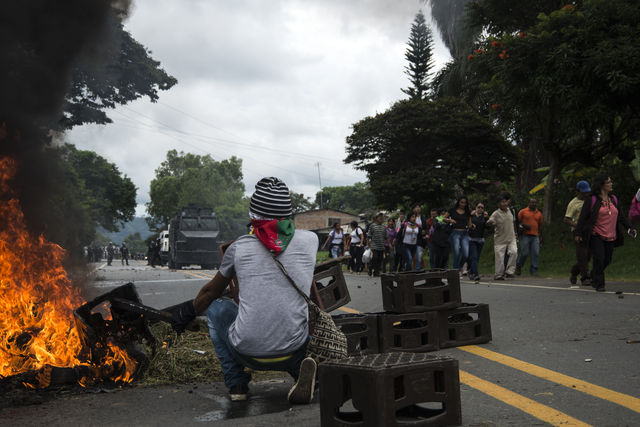 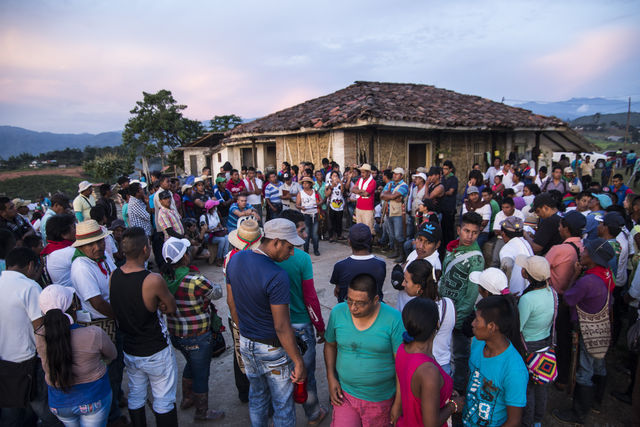 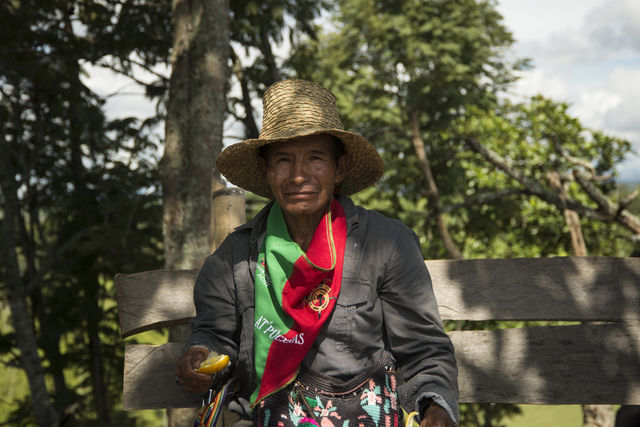 This week, tens of thousands of Colombians across the country have taken to the streets, blocking main highways in a nationwide agrarian strike which the government is responding to with military force. After only four days of strike, this response has already left three people dead, over 130 injured, one disappeared and seven detained, including a pregnant woman.

Two years of frustration and disappointment during talks with ministers has culminated in the Cumbre Nacional Agraria, Campesina, Étnica, y Popular calling upon farmers, peasants, indigenous communities and Afro-Colombian communities to join in a national strike. They demand that the government honours the agreements it has made. Previous strikes in 2013 and 2014 were brought to an end with a series of deals signed by the government which are left unfulfilled, revealing the negotiation process to be nothing but empty promises and stalling tactics.

Leaders of the national minga – a word of Quechua origin meaning ‘collective work’ – are resolved to continue the action indefinitely until their demands are met. With the government currently unwilling to enter into negotiations, instead responding with force, the strike could be ongoing for weeks or even months.

The Mobile Anti-Disturbances Squadron, ESMAD, a special riot control unit of the Colombian National Police, was deployed as protestors in 27 departments moved to block and occupy the highways. Some reports put the number of Colombians taking strike action across the country at over 100,000. The National Indigenous Organisation of Colombia (ONIC) reports over 30 blockades were held strong at the end of the third day of confrontation.

Human rights organisations such as the CPDH (Permanent Committee for the Defence of Human Rights) have spoken out against what they call the disproportionate use of force being used by ESMAD and the army against the strikers. However, the violence and repression continue to escalate.

The death toll already stands at three. The first day of action saw the death of Willington Quibarecama Nequirucama. The ONIC (National Indigenous Organisation of Colombia) confirmed that the 26-year-old indigenous Embera Chami man was run over during the confrontation in La Delfina, a rural area of Buenaventura on the southern Pacific Coast.

On Thursday, Gersain Ceron and Marcos Aurelio, both Indigenous Guard members from different Nasa communities, were shot dead as ESMAD forces opened fire in the north of the Cauca department. Many more were seriously injured. The Regional Indigenous Council of Cauca, CRIC, denounces this illegal and indiscriminate use of force against the peaceful resistance of indigenous communities, amounting to a severe violation of human rights.

Meanwhile, reports are surfacing of ESMAD forces entering into the temporary camps set up by the striking communities and burning their vital food supplies in a blatant attempt to starve protestors into surrender.

The movement calls for an end to current government policies, which prioritise the interests of multinational corporations above the lives and welfare of vulnerable communities across the country. Outrage and desperation have brought these communities to the streets, united in the defence of peace and pursuit of the truth.

They oppose the current National Development Plan, which opens the country to uncontrolled transnational investment, deepens the privatization of fundamental rights such as health and education, and leads to the liquidation of public companies. They reject the violence of state supported structures that continue to operate in various departments, in particular murders, kidnappings and threats against social and community leaders. They stand united against the Zidres Law, which facilitates the conversion of independent farming communities into salaried workers of giant transnationals. They denounce the state abandonment of social investment, leading to insufficient resources for public health facilities, inadequate access to quality higher education, and the unacceptable state of roads across the country. They condemn the excessive militarisation of both rural and urban territories which puts the civil population at risk with the intention of protecting petrol and mining interests.

For now, the struggle continues.

“We want peace to be built from our voices, generating real change in the living conditions of all Colombians. We want to recuperate the patrimony of our nation to achieve real guarantees in health, housing, work and education, and ensure that taxes are for OUR wellbeing.” (Manifesto: Párase Duro, Cambiemos Esto)