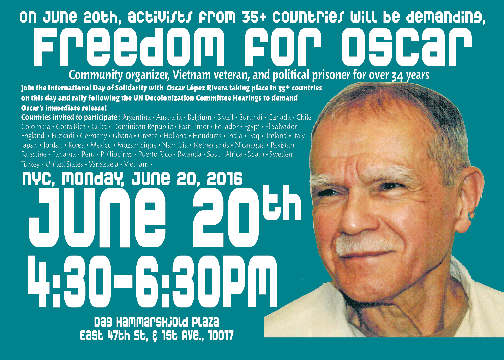 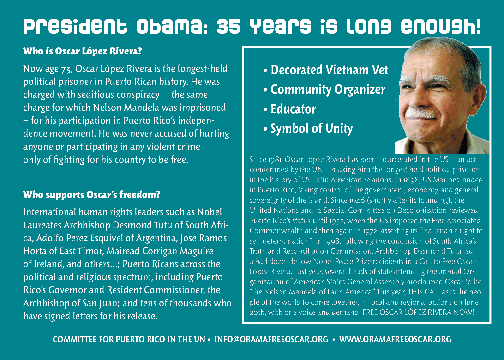 This messages carries a warm greeting and the gratitude of the Human Rights Committee of Puerto Rico for your constant support and work in the struggle for the release of Oscar López Rivera. Today, June 20, 2016, will mark a new series of events before the United Nations Decolonization Committee in New York to demand that the colonial case of Puerto Rico be examined by the General Assembly and a true decolonization process for our homeland be initiated. It will also be an International Day of Solidarity with Oscar López Rivera, whose incarceration is intimately tied to the struggle to decolonize Puerto Rico.

At present, when the executive branch of the United States government has admitted to its Supreme Court and the world that Puerto Rico is a non-incorporated territory subject to the plenary powers of the U.S. Congress, it is our duty and obligation to struggle against what the United Nations has defined as a crime against humanity: colonialism.

We invite you, in support of Puerto Rico's decolonization and the release of political prisoner Oscar López Rivera, to join the 35 countries (one for each year of Oscar’s imprisonment) engaging in peaceful activities to make known the international support for Oscar’s release. Whether you participate in a rally or post a photo to Facebook with the hashtags #FreeOscarLópez and #35paisesxOscar, we extend our gratitude for your efforts.

On June 20th at the United Nations in New York and throughout the world:  Free Oscar López Rivera, a patriot of his Puerto Rican people!