Despite predictions that hundreds of scabs would cross the picket line, and offers of time and a half to anyone who betrayed their union, the Mersey Fire strike began with a tremendous show of solidarity amongst FBU firefighters. 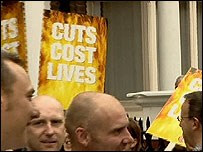 As previously reported, Merseyside firefighters overwhelmingly voted to strike against the cuts proposed by the Fire and Rescue Authority and demanded by the government.

The firefighters plan to strike from 10am yesterday until 10am on Monday, then they will begin another four day stoppage two hours later. Unlike in previous strikes, the region is without military cover, since the Territorial Army are on standby to go into Afghanistan and Iraq to help out in Blair's oil wars.

Only 170 staff are reported to have crossed the picket lines, and these seem to be from the former firefighters who were trained up in order to provide cover, plus fire chiefs themselves, who were given a hero's write-up in this morning's Daily Post.

Following yesterday's mudslinging from Bill Evans, the assistant chief fire officer now says he is ready for face to face talks with Merseyside Fire Brigades Union secretary Lee Skarratts. Though this is a good sign, Skarratts' fellow firefighters must make sure he does not give an inch, because there are lives and jobs at stake.

Liverpool Council leader Warren Bradley - who is also a firefighter - has offered his services as a mediator. Bradley voted against the strike in the first place, and does not seem to have the support of either firefighters or the Fire Authority, who want him to cross the picket line.

The mainstream media was bound to go for the throats of Merseyside FBU. But it is important to remember three things. First, they are trying to make sure there will be at least as many fire engines and firefighters in the future. Second, there is no cover because the Territorial Army is standing by to go into Afghanistan and Iraq. Third, part of the reason the government makes these cuts is that they are spending so much on war!