Eight more strike dates were announced this evening, which are scheduled to take place from 20th September. Meanwhile, it seems that the solid strike has finally forced the Fire Authority back to the table. 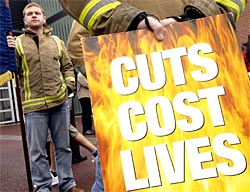 Today marked the second day of Merseyside FBU's second round of strike action. Unlike in previous disputes, there is no military cover, since the Territorial Army are involved in Afghanistan, Iraq and Kazakhstan.

In a Daily Post article the Fire Authority announced they had suspended a firefighter accused of making hoax calls during the strike.

In response, FBU chairman Mark Dunne said: "This firefighter has 15 years of service behind him and none of our members would be involved in making hoax calls. He is very upset by the accusations and attended the police station voluntarily. Our understanding is that the police are satisfied and are not taking it any further. So we don't know why they've seen fit to keep him suspended."

In a BBC News article, Merseyside Fire Authority chair Tony Newman announced he was ready to call in national FBU negotiators. This represents a great victory for the firefighters, as the Authority have been very reluctant to negotiate. However, Merseyside FBU have not broadened the dispute, and they now seem to have accepted that the cuts will come in some form. Yesterday's alternative cuts proposal showed they are hoping for a negotiated settlement which does not affect front line fire rescue.

The £3.5 million cuts demanded by the government are a drop in the ocean compared to the amount currently being spent on oil wars. All trade unionists and anti-capitalists on Merseyside have to step up to the plate and start putting all their theories into practice. We must recognise that it is the profit system that has demanded these cuts, and the profit system which has taken the Territorial Army off to the Middle East to fight for control of oil. With the big Manchester protest at the Labour Party conference coming up in ten days, we must use that media spotlight to highlight the link between wars abroad and cuts at home.

Another good opportunity to make our voices heard will come this Friday 15th September, when a national rally organised by the FBU will take place in Liverpool city centre. The cuts in Merseyside are a taste of things to come nationwide, so every working class person in the country should support the Merseyside firefighters.

The Fire Brigades Union says a firefighter suspended by the fire authority and accused of making a number of phone calls to strikebreakers was wrongly accused. The union now understands the individual who did make the phone calls - and who has no connection to the fire and rescue service - has come forward.

A national spokesman for the FBU said: “The firefighter who was suspended by the fire authority was wrongly accused. Another individual with no connection to the fire and rescue service has come forward and has admitted making the phone calls which have been the subject of a complaint.

“The fire authority suspended their employee an hour before he went on strike and would not have been at work in any event. In addition, they publicly announced the suspension had taken place when their was no obligation or reason to do this.

“Making the suspension public made it part of a public relations campaign used to attack those on strike. It also placed the individual suspended firefighter in the middle of a media circus surrounding the dispute and the suspension.

“In our view it was entirely unacceptable for the fire authority to make the suspension public and to use it in the way they have done. That is not a criticism of the newspapers or broadcasters but of those who have used them as part of their public relations campaign in this dispute.

“As employers they have behaved in a disgraceful manner and put an individual under the spotlight and under enormous strain. We expect them to make a public apology and to lift the suspension immediately.”