Following yesterday's massive march and rally in Liverpool, Merseyside FBU secretary Les Skarratts was back at the negotiating table today, knowing that thousands of people are behind his union's efforts to prevent fire service cuts. 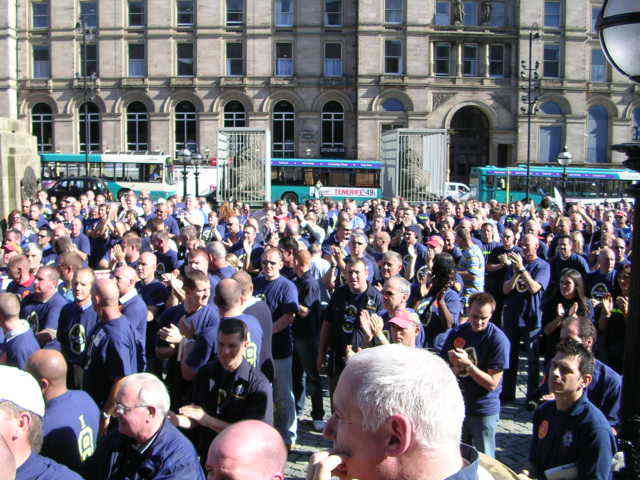 Seven weeks ago, Merseyside firefighters overwhelmingly voted to strike against the £3.5 million cuts proposed by the Fire and Rescue Authority and demanded by the government.

We are now five days into Merseyside FBU's second round of strike action. Unlike in previous disputes, there is no military cover, since the Territorial Army are stationed in Afghanistan, Iraq and Kazakhstan.

Today, Merseyside FBU secretary Les Skarratts was scheduled to met with the national FBU's negotiation team and representatives of the Fire Authority.

All trade unionists and anti-capitalists on Merseyside have to step up to the plate and start putting all their theories into practice, or the strikers will eventually be starved back to work. We must recognise that it is the profit system that has demanded these cuts, and the profit system that has taken the Territorial Army off to fight for control of oil, leaving Merseysiders with little cover during the strike. The big Manchester protest at the Labour Party conference is coming up in seven days. We must use that media spotlight to make the link between wars abroad and cuts at home.