£300 was raised on Merseyside this May Day weekend, in solidarity with sacked Visteon car parts makers who have now been blockading three UK sites for more than a month. 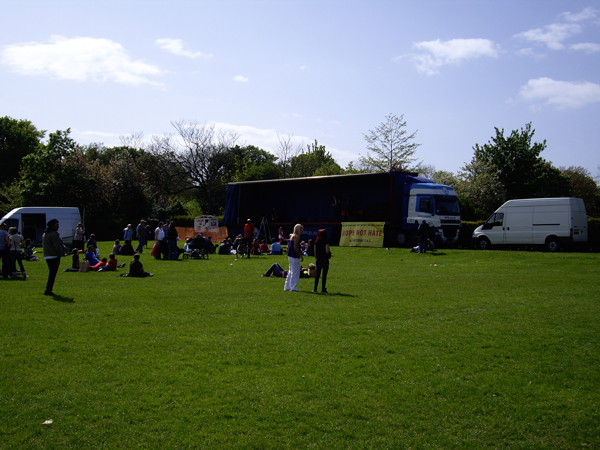 It is difficult to imagine a worse May Day rally... 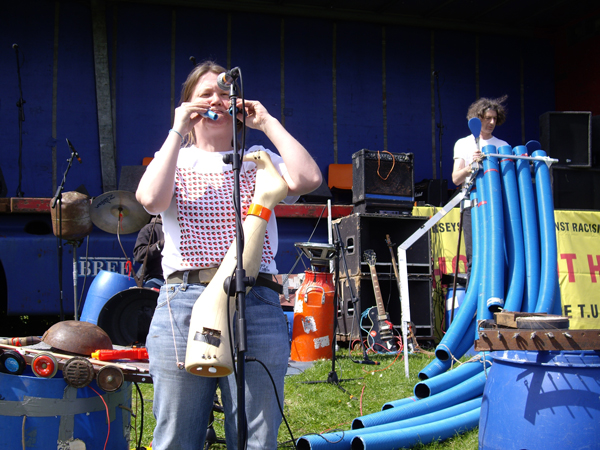 ...but it wasn't all bad thanks to Urban Strawberry Lunch... 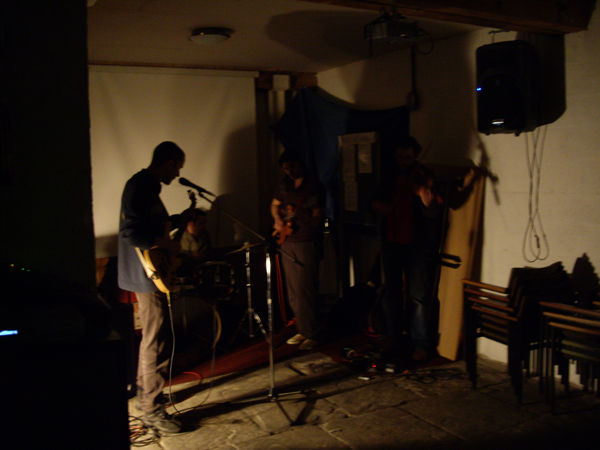 ...and Next To Nowhere social centre!

Recent weeks have also seen a workers’ cooperative take over running of the Dundee Prisme packaging factory, parents on the roofs of threatened primary schools in Lewisham and Glasgow, and various actions around the world. These are the first green shoots of a new workers’ movement, which is emerging from the decay of the union bureaucracy and other ‘representative’ organisations, as a historic economic crisis unfolds.

On Friday - May Day itself - activists hosted a film and discussion evening at Next To Nowhere, Liverpool’s social centre. Money was raised from donations and payment for the vegan food prepared by the social centre kitchen collective. A video journalist from the Reel News group presented a few of their DVD documentaries (see Birmingham report here), which were filmed within the Visteon, Prisme and Waterford Crystal occupations, amongst other places. The sights and sounds of working class people winning major concessions from their former employers brought the sense of excitement and newfound optimism to life.

In a particularly revealing scene, regional bureaucrats from the Unite union tried to frighten the occupiers out of the Enfield Visteon factory, with stories of riot police and prison sentences. One suit helpfully reminded workers that cops had killed Ian Tomlinson at the G20 protests just days earlier. A majority agreed to end their occupation, but they decided to maintain a picket at the gates, and quickly turned against Unite officials once they accepted an insulting deal behind the workers’ backs. This was rejected by the rank-and-file, the picket is still in place, and a much-improved offer has now been accepted.

On Saturday, 2nd May, it was time for the annual ritual of the Merseyside TUC May Day event, with a march from Seacombe Ferry to Central Park. Against the backdrop of a mounting crisis engulfing thousands on Merseyside and millions around the world, there was something almost tragicomic about the inadequacy of the event. Of perhaps one hundred people in the field when sacked NHS whistleblower Karen Reissmann and others made their speeches, only a handful were interested in listening. The majority were far from the stage, and were either drinking in the sunshine, enjoying the funfair, or watching a Punch and Judy show. At a time when many more working class people are struggling to cover their basic expenses, the refreshments on sale were priced astronomically high.

The steep prices are no doubt one part of the explanation for the extremely low turnout. Another is that hardly any publicity had gone out. But more importantly, this is symptomatic of an event organised by a bureaucracy that has significant resources, yet few surviving links with working class communities, and even less credibility within them.

Activists from the new Workers’ Fightback group distributed information on the Visteon struggle, and collected donations. They received abuse from some, but also money and encouragement from others who had not come to the park for politics. One woman, who used to work at the Ford’s factory in Halewood, expressed particular interest, as Visteon is effectively a Ford company, and disappointment that “it hasn’t been on the news”.

Back at Next To Nowhere, activists unwound after holding stalls on Bold Street, and watched some more inspirational videos, this time of Argentinean workers who occupied their factories in 2001, as well as the Visteon footage again. The similarities between the two situations seemed very strong, although the current crisis is much more widespread than the relatively localised Argentine collapse.

After this, a succession of musicians kept people entertained until midnight, with styles ranging from ska to ultra-fast heavy metal buskers to…well, some kind of dance music.

May Day was born out of international working class solidarity, and forceful demands for an improvement to intolerable conditions. Today, unions conduct empty rituals, whilst offering no perspective for an improvement in our conditions. This is not down to the personalities of individuals; it can only be explained by looking at social structures.

Unions oppose workers’ control of their jobs and struggles, and they are tied to nationalism at a time of a globalised economy. They can’t, therefore, be used by workers to fight back against attacks on living standards.

In fact, Barack Obama is trying to put the United Auto Workers union in charge of imposing cuts at Chrysler in the United States. Union tops will directly profit from increasing the rate of exploitation of their own ‘members’! This is an extreme example, but it is a taste of what is to come as the economic crisis deepens. Ford are getting a taste of a tactic that workers will increasingly adopt in their own defence.

For more information on Workers' Fightback, email workersfightback@riseup.net, or join the Facebook group.