An embedded report to come sometime soon, in the meantime here's my personal 'Letter to our Neighbours'... 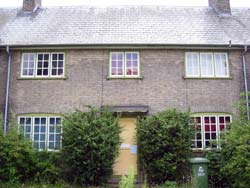 Allow me to introduce myself, I'm one of the people you may have seen coming and going from those three cottages of 18-22 Fitzwilliam Road. Those cottages that look abandoned and just a little bit sad, surrounded by a lovely garden that told us no one had cared about them for a while. Those buildings and land that have so much potential for a rich and interesting future, but instead they lie there empty, depressed and waiting to be destroyed.
A group of people have moved into those buildings with the intention of giving them a future, we plan to open a social centre. A social centre is a flexible space run by volunteers, for benefit of the community. We aim to act in a manner which maximizes respect for life, community and the environment.

Let me bring you up to speed, from my perspective...

Around June 2005 – A group of Cambridge people were thinking things like 'why haven't we got a space to give focus to social campaigning in Cambridge', 'We should try setting up an example of how to live in a sustainable way', 'wouldn't running an organic vegan cafe be good, we don't have one in Cambridge', 'Why are we at war?' and of course... 'Let's take action!'

The last week of July - The three cottages of 18-22 Fitzwilliam Road are spotted standing empty and wasted. A quick inspection and we see that they are abandoned. The land is surrounded by an empty plot covered in signs that inform us it's up for development and owned by January's. That plot sits in an area of Cambridge that's seen lots of 'development' of late, luxury flats and commercial boxes are rising from the ground, the area around Hills Road is changing...

A little later in the week - After some quick research it appears to us that the buildings are scheduled for demolition to make way for a new housing development. There seems to be some of local objection to the plan to demolish the buildings and reservations about the development (see documents below).

Friday 29th July - The group visit the buildings again, we find them open and empty. We decide to move in as a matter of urgency and to carry on the research 'in situation'. This also means we give the buildings some protection as people are living there (squatters rights) and we can repair and maintain them.

Weekend - Cleaning and we start to set up some basic living quarters. The properties are solid but they haven't been looked after for a while and there's plenty to be done. All the sockets and some wiring have been ripped out and we found that number 20 had been left with a 'leak problem' so there is now some water damage.

A representative of the owners comes round with a 'water man' to switch off the water supply and they discover us living there. The supplies to the buildings have to be stopped before it can be demolished. We're told that they'll ‘see us in court’. The gas man turns up in the afternoon... Sorry about the wasted car journey!

A general meeting of about 20 people. For some it was the first time they'd seen the space. Lots of enthusiasm for the social centre, some reservations about the whole thing being 'rushed' and that we haven't got any 'political processes' or 'common goals' in place, more people committing time and energy. Action plan is starting to form...

A court order appears through the door, Diversa Developments Ltd are claiming that they own the property, they are also claiming for court costs. The claim will be heard on 10th August at 10am at the Cambridge County Court.

Some people leave the property, some feeling of confusion and 'loss of direction' already. Some disagreement about what to do next, a meeting called for the next day. More cleaning, set up of an 'operations room' and 'tool point' in number 20.

Wednesday 3rd - Some action during the day, meeting in the evening attended by around 11 people. It was decided to forget the court case until we have more legal information and in the mean time lets just crack on with setting up the social centre...

And just what is the Cambridge social centre? As you may be able to tell, ideas are still 'in development'. I personally see this as a positive thing, as I hope it will encourage people from the local community to get involved from the start. But here's a quick list of some of the current ideas...

• Sunday 7th - 7.30pm - Film Screening of Undercurrents: Mark Thomas Comedy Show. Some people will be bring food to try and raise donations towards the social centre.

We’re currently getting legal advice and we would like to make links with the local residents and workers. We been informed of a healthy residence association in the area? Please do just come down and see us if you want to find out the latest or have information that you want to share (if you have any documents, copies for the 'operations room' would be nice).

Some people will not want the social centre to open and may see the project as an illegal occupation of property. Despite the introduction of the Criminal Justice Act, squatting is still legal in England. Squatting doesn't have to be a destructive and anti-social act, as it is often portrayed.

We are aware that a project such as this will need the support from a diverse range of people, both local to the social centre and from Cambridge as a whole, so please do get involved!

We'll try our best to keep people informed of what's going on, we're going to set up a notice board in the front garden and a website at www.socialcentres.org/cambridge is also in the making.

To get in touch you can email us at

cambridge@socialcentres.org, but the best thing to do is just come along and say hello. We seem to be an interesting bunch of dissidents, lots of computer people (well, this is Cambridge), environmentalists, a brain scientist, students, musicians, writers, artists and all round creative types.

Documents: Copies of all documents are available to read in the 'operations room' at the social centre, we are also setting up a website to keep track of the project at

http://www.socialcentres.org/cambridge/
At the moment we have: Cambridge University Press Planning Application (20/10/2004), The claim for the possession of the property (02/08/2005)