'William Bradley Roland, also known as Brad Will, 36, a documentary filmmaker and reporter for Indymedia New York in Mexico, Bolivia and Brazil, died today of a gunshot to the chest when pro-government attackers opened fire on a barricade in the neighborhood of Santa Lucia El Camino, on the outskirts of Oaxaca, Mexico. He died with his video camera in his hands.' (source: Narconews) Read NYC-Indymedia statement and a Call to all independent journalists to support the struggle in Oaxaca.

Brad had been in Oaxaca taking video and reporting on the state wide popular uprising and teacher strike that began in June with the violent attempted removal of the striking teachers from their encampment in the centre of Oaxaca City by federal police forces. 3 others were also killed alongside him (making 4 dead in total); 1 member of Radio Universidad was also injured: he was taken to the hospital in a volkswagen van as police would not let any ambulances come.

Since the beginning of the strike in June, teachers and other groups have formed the APPO - the Popular Assembly of the Oaxacan People - and have called for the removal of the governor of state Ulises Ruiz of the PRI. There is a long history of Mexico using government sponsored paramilitaries to repress social movements, including a massacre of hundreds of students in Mexico City in 1968. As reports of protesters surrounded by armed government forces and police continue to pour in, activists in cities around the world are planning protests at Mexican embassies and in cyberspace in outcry against the violent aggression against the people of Oaxaca. 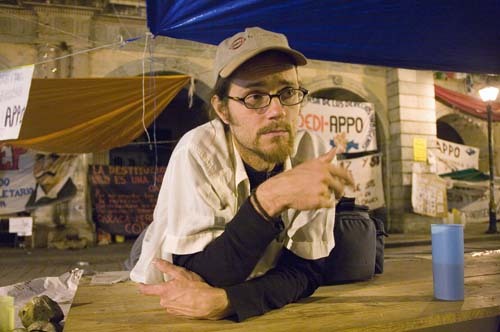 (i) Two people have been arrested who were allegedly responsible for the armed attacks against a barricade in Santa Lucia del Camino Friday afternoon that caused the death of New York videographer Bradley Roland Will. They are Abel Santiago Zurita an official from Public Security and Manuel Aguilar, the head of the neighborhood council of Santa Lucia del Camino. (source: NYC Indymedia)
(ii) After Mexican president Vicente Fox ordered federal forces to attack Oaxaca and take back control of the occupied government buildings, violence has erupted at various places around the city since the troops moved in early morning. Attacks against civilians by para-military and state troops has resulted in dozens injured. Many of the people reported as missing -most of them injured- are turning up in Miahuatlán and other prisons of state in Oaxaca.
(iii) A march in the federal district of Juarez to the presidential residence was detained and stopped in Chivatito by a line of soldiers. The march in Mexico City is arriving at La Diana, there are approximately 2500 demonstrators in support for Oaxaca. The body of APPO militant Emilio Alonso Fabian is arriving at the main plaza of city of Oaxaca to be mourned. The Secretary of State gives an ultimatum to the APPO to leave the city and return all the government buildings this afternoon.
(iv) Some buildings in control of the Popular Assembly of the Oaxacan People (APPO) have been looted by para-militaries. A barricade was erected in Juarez, Mexico in support. Rallies are taking place in Michoacán, in support of those detained. Radio Universidad de Oaxaca is being attacked, they're calling for support. Read full timeline.

(i) Infamia en Oaxaca, Brad's final footage is online.
(ii) Bradley Will: testimonials and tributes (from the NYC open publishing newswire)
(iii) Preventive Police (PFP in its Spanish initials) have surrounded Oaxaca; have been authorized by Vincente Fox to enter the town.
(iv) Mexican Independent Media give out a communique calling on all independent journalists to support the struggle in Oaxaca.
(v) A vigil took place at the Mexican embassy in New York (photos: [1] | [2] | [3] ) while in Chile, Santiago: "In the middle of the night, a number of people spray-painted phrases against the Mexican state and the repression in Oaxaca, and remembering Brad, and ((i))'s in all the pleaces near the embassy. The embassy was spray-painted and the cars outside were also spray-painted. Two security cameras stolen." (source: NYC Indymedia)
(vi) In San Francisco about 50 people gathered at City Hall to hold a vigil in memory of Brad Will. In Brazil people spraypainted slogans on the Mexican embassy.
(vii) Mexico Indymedia publishes (disturbing) corporate footage of the incident.

(i) It was been confirmed that Oswaldo Ramírez, photographer for Milenio Diario, has also been shot and is injured.
(ii) According to a post at CML at 23:06 local time the murderer of Brad Will has been identified as Pedro Carmona, a paramilitary who was the mayor of neighboorhood of Felipe Carrillo Puerto de Santa Lucía del Camino.
(iii) The APPO has confirmed that schoolteacher Emilio Alfonso Fabián has died from three bullet wounds after an attack by shooters for Governor Ulises Ruiz Ortiz.
(iv) Al Giordano, a friend of Brad Will, wrote on Narco News: Tonight, from the Oaxaca City Morgue, Brad Will shouts "Ya Basta!" - Enough Already! - to the death and suffering imposed by an economic system, the capitalist system. His death will be avenged when that system is destroyed. And Brad Will's ultimate sacrifice exposes the Mexican regime for the brutal authoritarian violence that the Commercial Media hides from the world, and thus speeds the day that justice will come from below and sweep out the regimes of pain and repression that system requires. Brad gave his life tonight so that you and I could know the truth. We owe him to act upon it, and to share the risks that he took. (v) Solidarity actions with the people of Oaxaca and to remeber Bradley have started all over. A vigil was held in Tucson, Arizona (US) last night.

Brad Will's death has been confirmed by La Jornada (Mexico) and Radio APPO Oaxaca. A photographer from the newspaper Milenio Diario, who was at Will's side, was shot in the foot and reportedly injured, his status currently unknown. Radio APPO, the radio of the Popular Assembly of the Oaxacan People, is reporting truckloads of armed paramilitaries entering the city. They are calling for people to reinforce the thousands of barricades that have been constructed for months as part of the statewide teachers' strike and popular uprising that has demanded the removal of PRI governor Ulisis Ortiz Ruiz.

As reported on the global Indymedia site, Brad was at the Santa Lucia Barricade and was shot from a distance of 30-40 meters right in the pit of the stomach. They say it was urban paramilitary PRI-istas in plain clothes who shot him. People then pulled him away to safety, however it is confirmed that he is dead; his body is at the Red Cross in Oaxaca.

Some photos of the shooting

UK newswire: David Rovics on Brad Will | video of brad - indymedia volunteer shot dead | Llama EZLN a la solidaridad con Oaxaca | Mexican Embassy Protest.? The murder of Brad Will by the Mexican State, discuss | Brad Will for ever. Oaxaca | Indymedia: Brad Will, Bravery, Our Common Struggle | news about mexico, a photograper of indymedia was killed | Troops threat to protestors in Oaxaca, Mexico | Bilingual Bulletin from Oaxaca | Bullets and Barricades in Oaxaca, Mexico | Two Days in the Life of Oaxaca's Revolution | COURAGE AND RESISTANCE IN OAXACA AND MEXICO CITY | The situation tonight in Oaxaca, Mexico | Read more on the Zapatista topic page 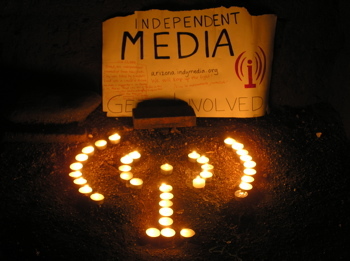 Solidarity actions with the people of Oaxaca and to remeber Bradley have started all over. This photo is of a vigil held in Tucson, Arizona, US last night. 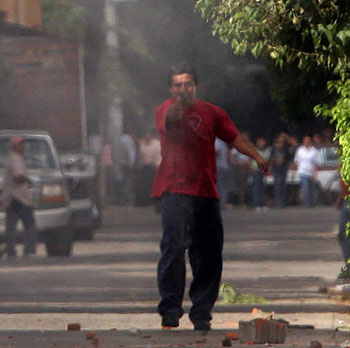 the killer of brad 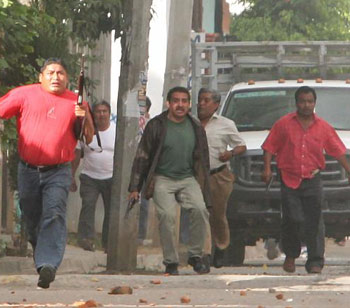 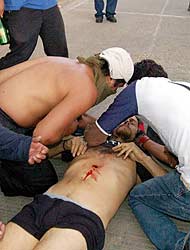 brad on the ground 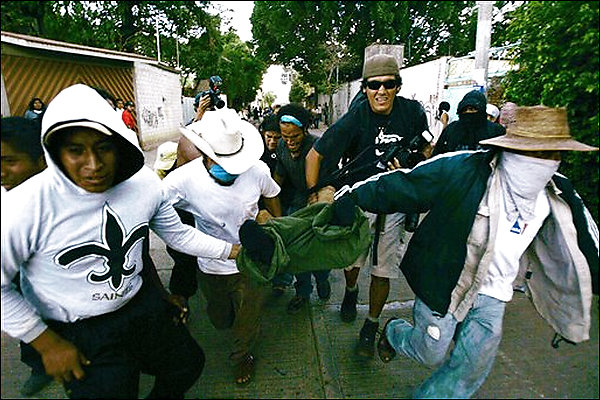 brad being carried away


However, U.S. Ambassador to Mexico Tony Garza said the armed group may have been police. The Mexico City newspaper El Universal on Saturday published photos identifying some of the men firing at protesters as local officials.
"It appears that Mr. Will was killed during a shootout between what may have been local police" and protesters, Garza said in a written statement.

U.S. Ambassador Tony Garza said in a statement that the shooters may have been Oaxaca police, and the Mexico City newspaper El Universal published photos Saturday identifying some of the men firing at protesters as local officials.

Mayor Manuel Martinez Feria of the nearby town of Santa Lucia del Camino said five men who appeared in the photos brandishing pistols had been turned over to state officials for possible involvement in Will's killing. He identified them as two members of Santa Lucia's city council, two of that town's police officers and a former justice of the peace from another town.
-------------

another piece of news is that mexico indymedia have posted a video on youtube. it is extremely disturbing and graphic.

Today, 29 Oct, a group of around fifty activists of the association YaBasta! coming from all over Italy have realized an act of international solidarity with the popular movement of the city of Oaxaca (Mexico) that was brutaly attacked by police and paramilitary forces on last friday.

The action took place at the mexican embassady at Milano (Italy), causing the closure of the entire street and the portal was marked with blood-red colour. The denunciation of the part the official forces played in the killing of the teachers fighting for their salaries and the american video activist was expressed by appending a huge banner at the building front saying: TODOS SOMOS OAXACA: ALTO A LA REPRESION. FUERA ULISES RUIZ.

The word 'ASSASSINI' was written in huge letters just in front of the embassy. The demonstration went on for around an hour. (...)

Complete solidarity by the Association YaBasta! with the people of Oaxaca, APPO, Radio Planton and every organisation involved in the struggle was declared.

A full report in Italian and pictures is on imc italy:

Protest in front of the Mexican Embassy in London

An International appeal has been made to demonstrate against the repression to the OAXACA workers and its population by the army.

Please circulate it and try to attend.

Meeting point: Monday 30th October, at 5pm in front of the Mexican Embassy in London

“YOUR ACTION CAN AVOIDED THE REPRESSION”

PACIFIC MOBILIZATIONS IN FRONT of MEXICAN EMBASSIES AND CONSULATES

Against the violent solution provided by the government of Ulises Ruiz Ortiz and the federal government of Vicente Fox, who are sending the Armed Forces with the objective to put down the popular movement that demands the resignation of the governor Ruiz.

We invited you to manifeste youself in front of the embassies and consulates of Mexico in solidarity with the victims of the conflict of Oaxaca.

SOLIDARITY WITH THE ACTIVISTS IN HUNGER STRIKE!

ENGAGE A DIALOGUE!
PLEASE CIRCULE IT!