60th Anniversary vigil in Market Square, Nottingham organised by Nottingham CND and Greenpeace. Local groups holding events all across the country to commemorate the 60th anniversary of the atomic bombing of Hiroshima and Nagasaki. 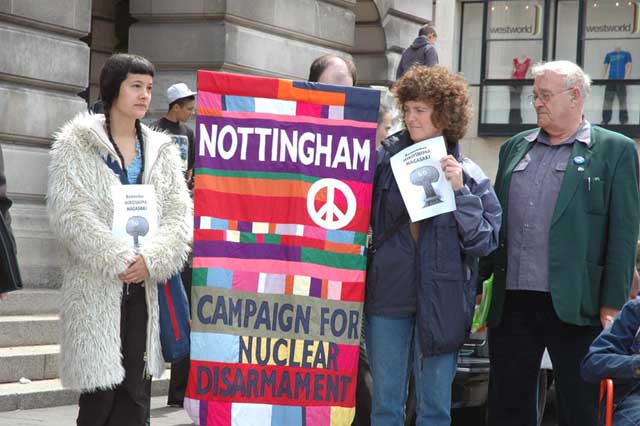 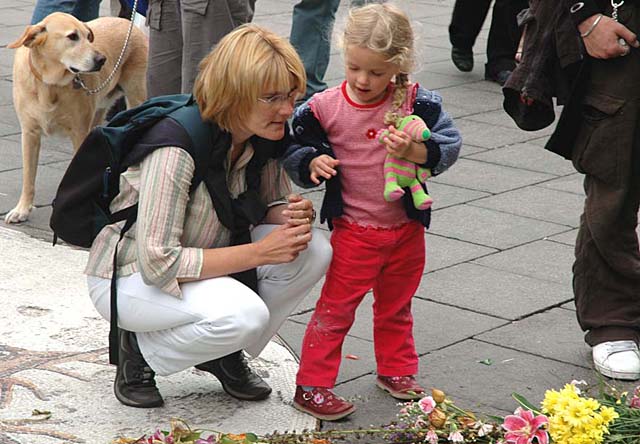 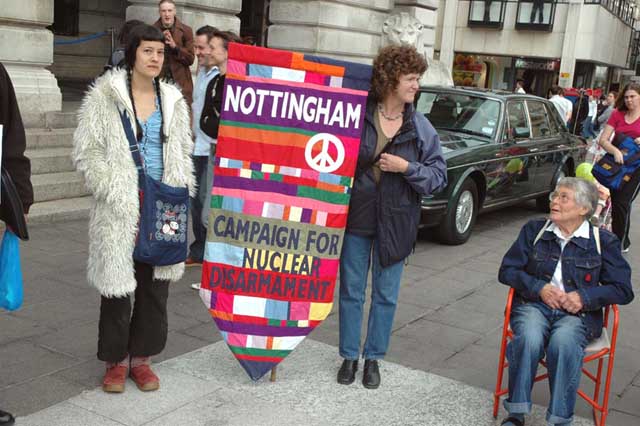 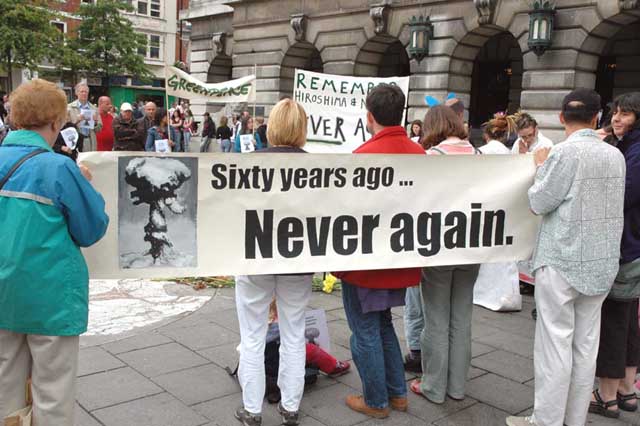 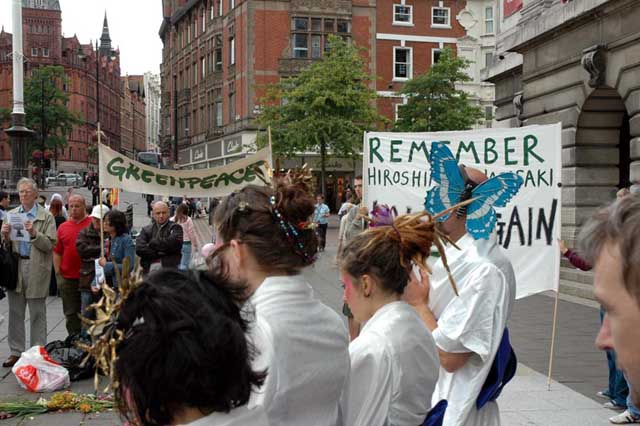 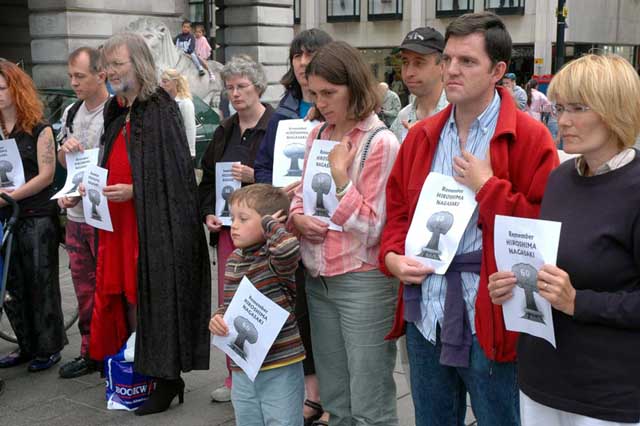 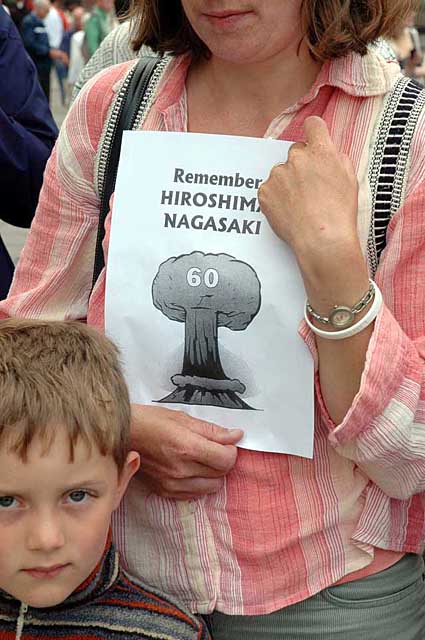 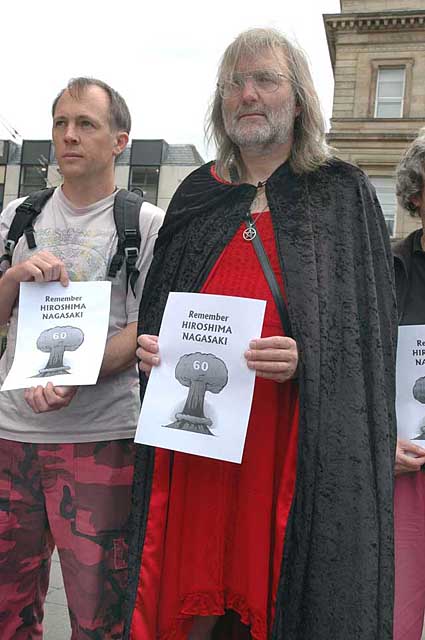 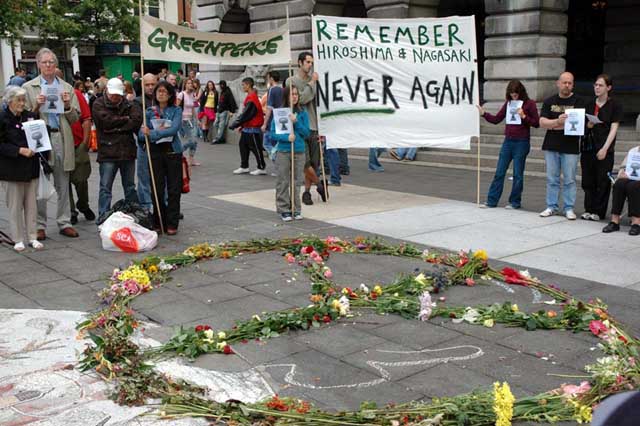 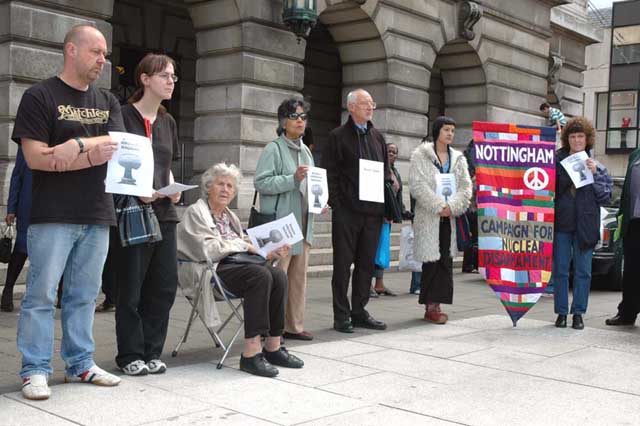 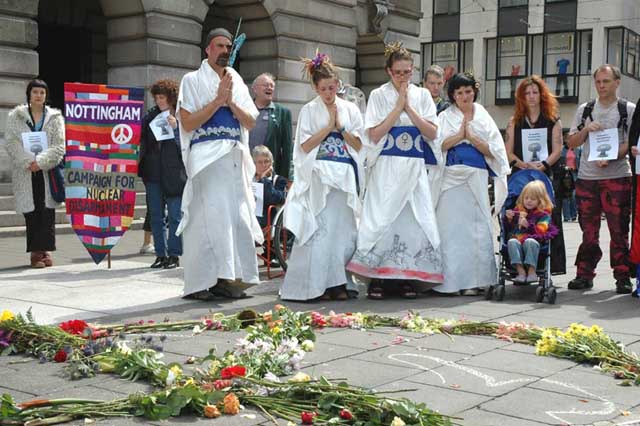 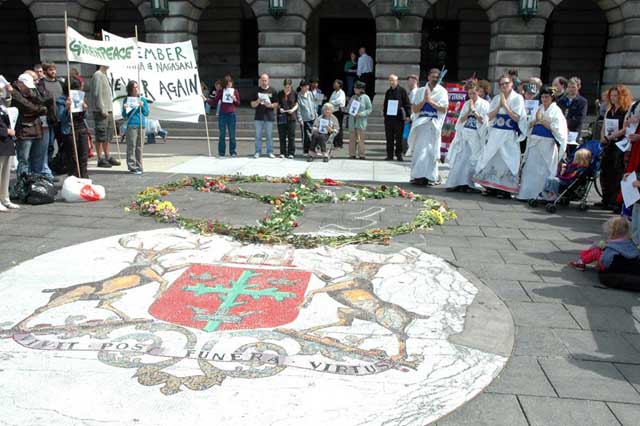 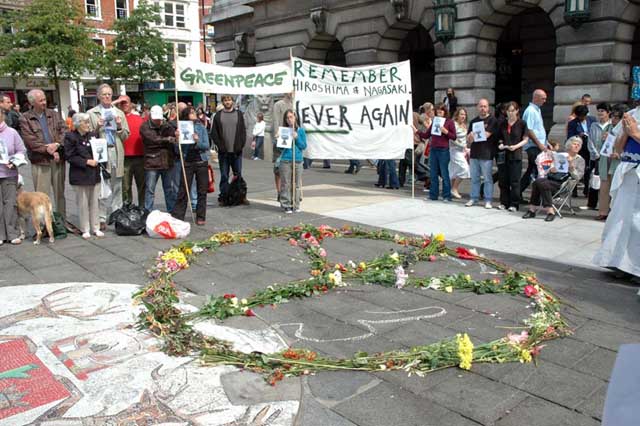 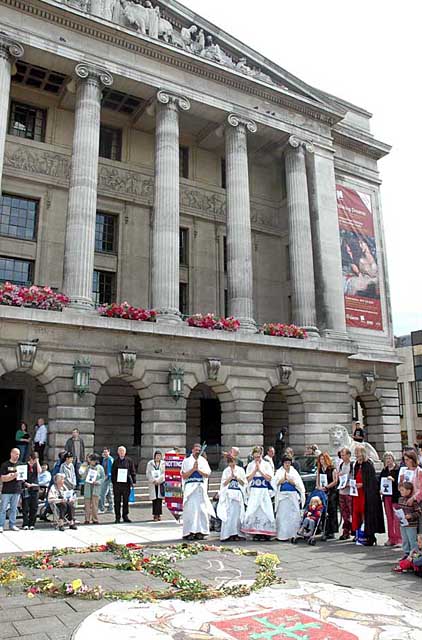 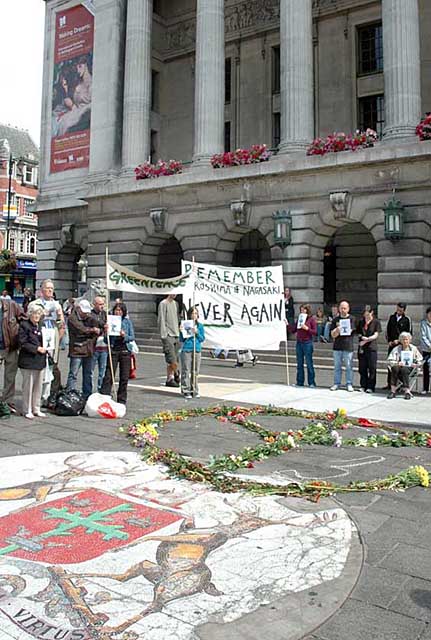 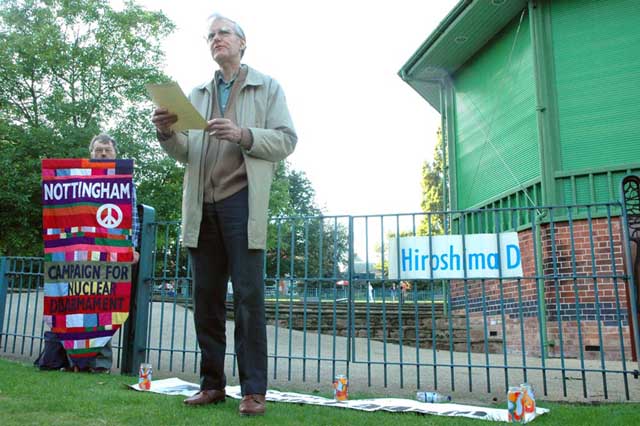 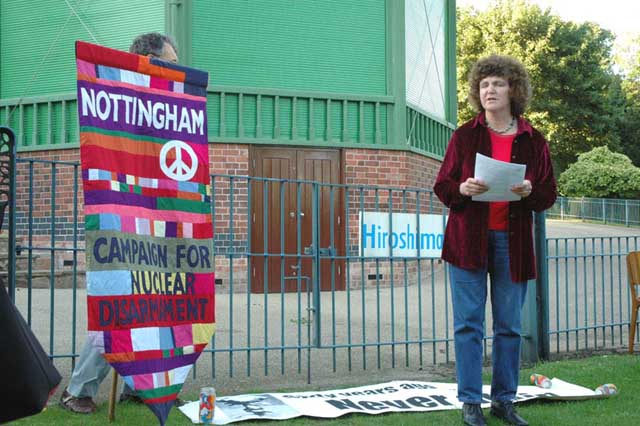 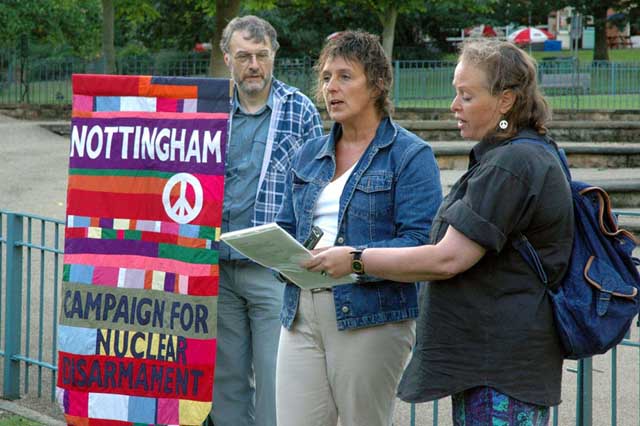 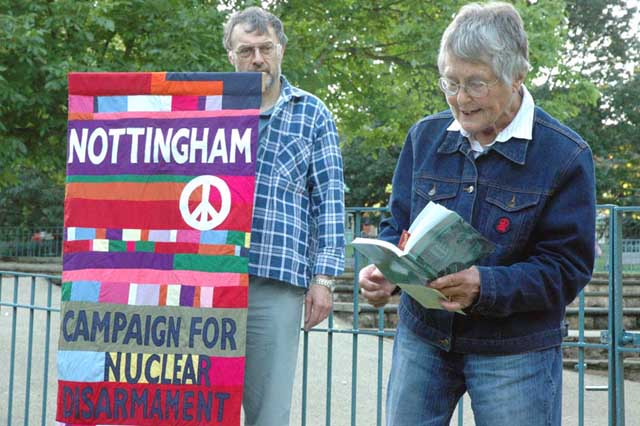 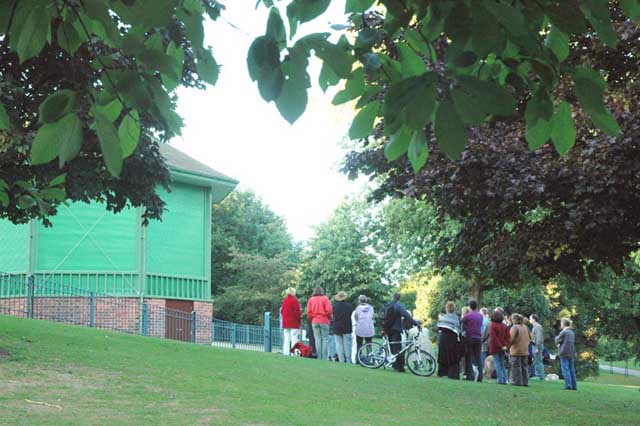 CND national, regional, and local groups are holding events all across the country to commemorate the 60th anniversary of the atomic bombing of Hiroshima and Nagasaki.

The 1945 Bombings
The Manhattan Project, code name for the US top-secret development of the atomic bomb, began in 1942. The first atomic explosion took place over the New Mexico desert on 16 July, 1945. The test was considered a success, and the Truman administration gave the order to drop the atomic bomb in Japan only nine days later, on 25 July.

On 6 August, 1945, the US dropped an atomic bomb on Hiroshima, Japan. The bomb, called ‘Little Boy’ contained Uranium-235 and had the destructive power of over 15,000 tons of TNT. The bomb exploded at 580 metres above the city. ‘Fat Man’, the bomb dropped on Nagasaki on 9 August, contained Plutonium-239 and had the destructive power equivalent to 21,000 tons of TNT. It exploded about 500 metres above ground.

The intense heat rays from the nuclear explosions incinerated tens of thousands of people and caused disfiguring burns on many survivors. It is thought that the temperature at the site of the blasts reached millions of degrees centigrade at the peak of the explosion. Intense shock waves levelled all structures within a wide radius, and massive amounts of radiation were released.

The official Hiroshima government estimate is 140,000 dead they stopped counting after December 1945 when acute illnesses subsided. Many thousands more died in the months and years following the attacks.

The damage to Nagasaki was somewhat less, probably due to the topography of the city. Even with this natural protection, at least 70% of the city was destroyed by ‘Fat Man’ and approximately 100,000 civilians were killed.

Radiation sickness is now a well-known condition that has affected thousands of Japanese over many years and incidents of leukaemia and cancer are high in these two areas.

Dispelling the lies
Conventional wisdom has it that the US dropped the nuclear bombs in order to minimise casualties, claiming that a ground war would have killed many more people. However, historical records have shown that Japan was in fact trying to surrender at the time. Dwight Eisenhower, commanding general of US forces in Europe in World War II and President of the US from 1953-1961, said, Japan was at that very moment seeking some way to surrender with minimum loss of face. It was not necessary to hit them with that awful thing. The annihilation of Hiroshima and Nagasaki was a defining moment in global warfare and marked the emergence of the US as the world’s dominant super power, a position secured by its unchallengeable nuclear might and its preparedness to wield it. This is the only time that nuclear weapons have been used in war.

The new nuclear threat
60 years on, however, the threat of nuclear weapons being used in war is growing once again. At least eight countries possess nuclear weapons, all far more powerful than the bombs dropped in 1945. Despite the responsibilities of Nuclear Weapons States under the Non-Proliferation Treaty (NPT), there has been no significant move towards disarmament.

In fact, we are seeing a drive for greater nuclearcapability, led by the United States. The US 2002 Nuclear Posture Review outlines the role of nuclear weapons in winning wars and names North Korea, China, Iraq, Iran, Syria, and Libya as countries where ‘contingencies’ could lead to a first-strike use of nuclear weapons.

The development of the US National Missile Defence (NMD) shield would enable the US to launch a nuclear attack on another state without fear of retaliation. Many governments and experts throughout the world are concerned that the successful implementation of this system will lead to a new arms race. Indeed, Russia has already

tested the SS-27 Topol-M missile, designed to defy interception by the NMD system, and in 2003 North Korea withdrew from the NPT.

The British Government has now adopted a ‘first strike’ use policy, agreed publicly to the use of Fylingdales for US NMD, and signed an US agreement for greater ballistic collaboration. Experts believe that plans for a laser testing facility at Aldermaston Atomic Weapons Establishment (AWE), could be used to develop new nuclear weapons. The British government is also seeking to replace the Trident system. The Prime Minister has

made clear his support for pre-emptive war, stating that Britain must act even when the threat (seems) so far off, if not illusory.

These moves toward greater nuclear capability and to first-strike use in the context of the on-going pre-emptive war drive increase the threat of a nuclear arms race and of nuclear weapons being used once again.

No More Hiroshimas, No More Nagasakis
In an attempt to communicate the scale of the devastation of the tsunami, many international commentators likened it to Hiroshima. This shows what a resonance the 1945 bombings have on the world consciousness. Furthermore, research shows that Hiroshima is people’s primary spontaneous association with nuclear weapons.

The 60th anniversary of Hiroshima and Nagasaki is an important opportunity for us to raise awareness amongst the general public of the horrifying reality of nuclear war, and the need to join CND’s campaign for global nuclear abolition and against new nuclear weapons. In particular, members should put pressure on the British government to meet its disarmament obligations and end its support for the US pre-emptive war drive.

7 August -- 1pm -- "Dr. Strangelove"
Special showing of the film "Dr. Strangelove or: How I Learned to Stop Worrying and Love the Bomb", with introduction by Jenny Maxwell from West Midlands CND. Come to see this classic film in which an insane general attempts to start a nuclear war, directed by Stanley Kubrick and starring Peter Sellers.