3 and a half years since the eviction of the Forest Lodge and the building remains empty.
In April 2002 the occupiers of the Forest Recreation Ground Lodge were taken to court and evicted by Nottingham City Council. The local rag, The Evening Post ran a story in which the council claimed that they planned to utilise the building within 1 year of the eviction. They claimed that they wanted to convert it to "a centre of excellence for gardening" (eh?) or an art gallery (not bad). Of course, there were no plans as time has shown.

The Forest Lodge built in 1857 is a grade II listed biulding, after the eviction the council smashed all of the windows, battered down one of the original doors, and fitted perforated steel sheeting, exposing the building to the elements, the following winter a burst water pipe which occur frequently in empty homes was luckily spotted and reported before causing serious damage.

Earlier this year an inspection of the building showed prolific damp inside caused by having been exposed to the elements for 3 years, and by not being heated, damp causes molds, amd molds mean structural damage to a building.
A letter was written to the evening post highlighting the councils inaction over this fabulous building, and pointing out the inadequate steel sheeting, The post wanted to run an story, but backed out last minute. I also contacted Nottingham Civic Society (www.nottinghamcivicsociety.org.uk)who are concerned with listed buildings and they agreed to bring the issue up in their next meeting with the council. With the press and NCS interest, the coucil decided to change to sheeting for plywood boards, hardly likely to make a difference to the already rampant mold.

Earlier this summer the council held a public meeting to discuss the Forest Recreation Ground, The issue of the Lodge was raised at that meeting, what plans do the council have for the building?....None! now there's an honest answer. Apparently they have had no interest in the building (have no interest in the building would be more apt), are unable to sell it, and don't have the cash to renovate it. How about this Nottingham City Council: I know of loads of people who would be interested in forming a collective, and taking on the building and turning it into something beneficial for the community in which it sits, hell we might even turn it into an art gallery, not to keen on the garden centre idea though, too small. 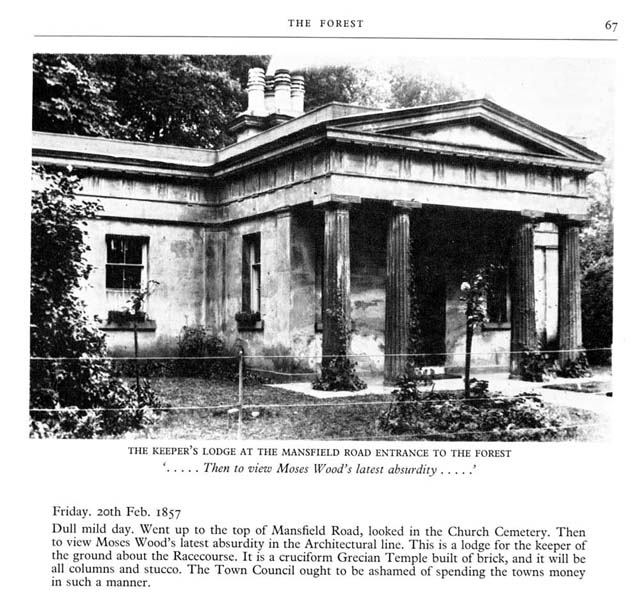 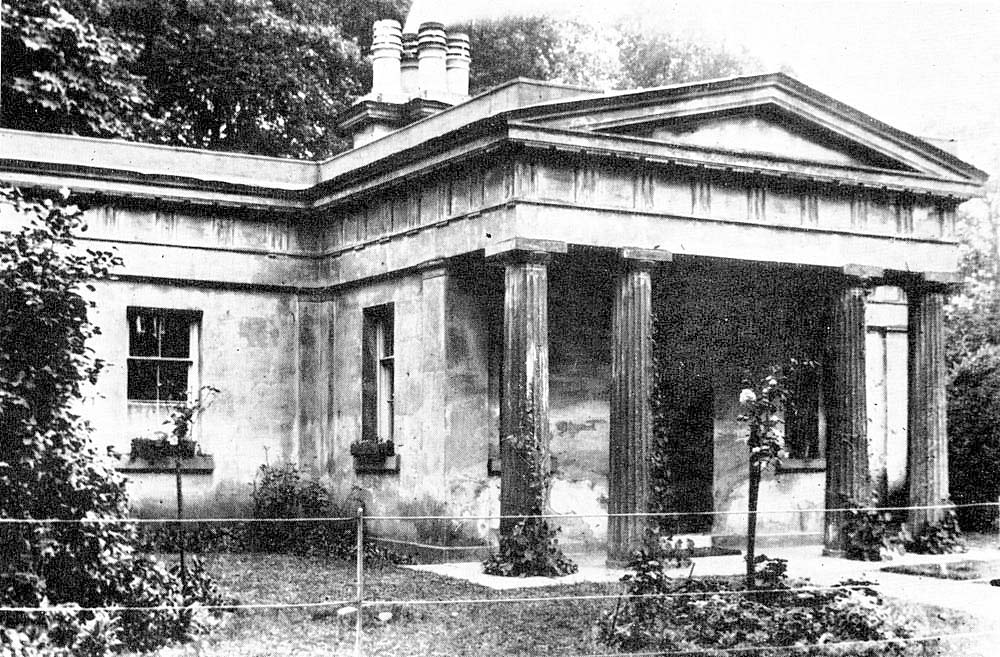 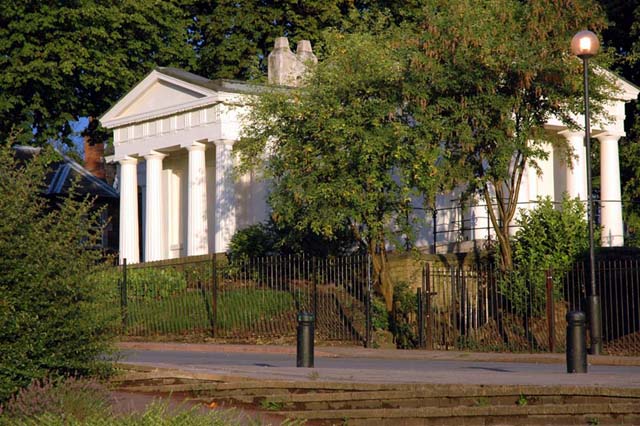 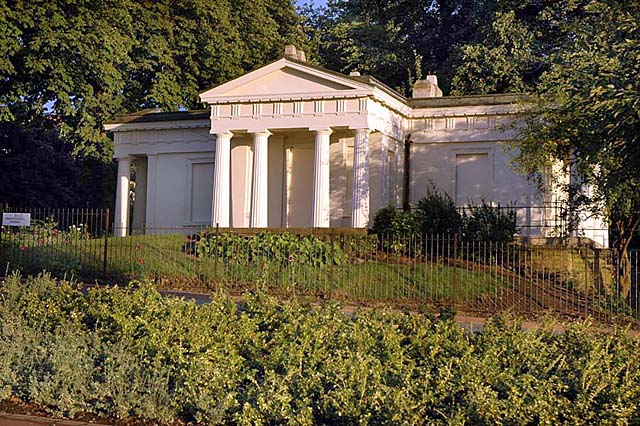 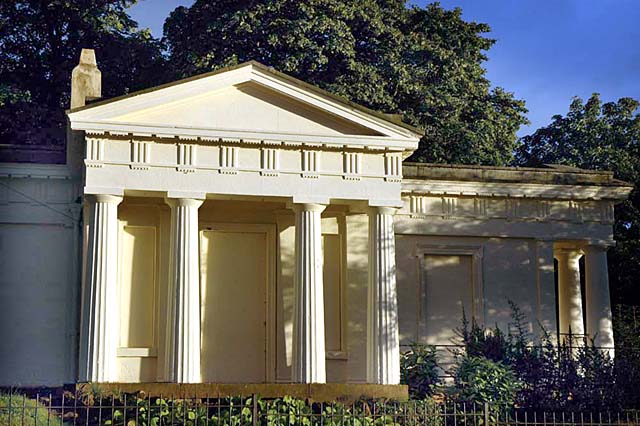 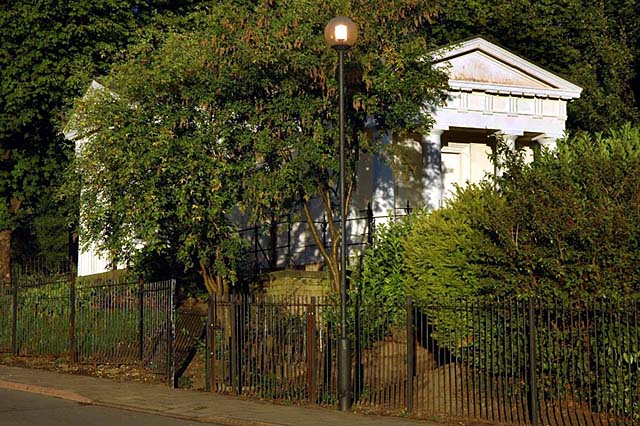 On the now 'Forest Ground' a race stand was constructed in 1777. The Keeper of the Forest lived in the race stand until a special house was built for him some time in the latter part of the C19. That house still stands on Mansfield Road, close to The Rock Cemetery.

A listed building, designed by Henry Moses Wood, Borough Surveyor, in 1856/57.
Trust Architect - the late John Severn.
Contractor - CR Crane and Sons Limited. Works carried out 1984/85.
Refurbishment Cost - about £26000.
Another lodge on the edge of the Forest Recreation Ground, currently unoccupied but refurbished by the Trust and owned by Nottingham City Council. Used at one time as a police station.

I have a set of books of photographs of Victorian Nottingham.

I was interested to read a diary entry from a visitor. On the 20th Feb 1857. He said the Lodge, originally build for the Racecourse Keeper, was an absurdity, built in the wrong materials and that the town council should be thoughly ashamed of themselves .... [150 years later, that's still the view of many of us].

The race course shut quite a while ago now, and they haven't used the building since. Just set on evicting people that do actually have a plan for it.

Amazing that the council sought £26000 from a trust back in the Eighties, only to let it go to ruin.

There is a rumour that it was once sold as a leasehold to someone who then won a substantial amount of money on the Pools, and then abandoned it. This could of course be a local urban myth, but if it is true then the council couldn't have rightly evicted us. we were not given a stay by the court to find this out, and I wouldn't know where to look. any council property service workers out there that read this and want to supply the information to me? :

Thanks for the extra information Tash, nice photo's too. I have got the original print of that old photo in your book on my wall!

I squatted at the lodge for a number of years & inside & out it was a art project the council shutdown, be lovely to see it happening again.
One group with funds for it that approached us were doctors looking for a surgery on the forest, but they have moved to arboretum clinic, though if anyonne has any nhs connections please check it out. I offically complained to the council because someone let water off inside the building. I think some of the top councillors would be happy if someone burnt it down so they can build some lovely corporate structure on the old boy network,bless em your web site address