A representative of the Pakistani armed forces is speaking at the University of Nottingham. Action is needed because of the continuing militarisation of Pakistani society, human rights violations including attacks on labour and peasant activists and minority groups, and Pakistani army complicity in the US global torture gulag. 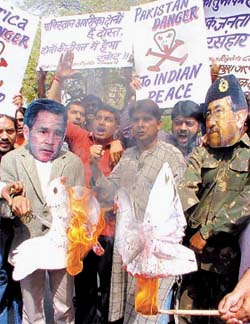 This year's Sir Stanley Tomlinson Memorial Lecture (big prestigious uni lecture), hosted by the University of Nottingham's Institute for Asia-Pacific Studies, is being given by a certain Lt.General Arif Hassan of the Pakistani Army, on Pakistan and global terrorism. The same army just back from raping and pillaging its way across Waziristan in the pay of George W Bush, which lent its airbases for use in the bombing of Afghanistan. These lectures are quite high-profile, with sometimes hundreds attending, and often a media presence.

Details of seminar:
Monday 7th November, L&SS (Law and Social Sciences building), B62, 5.00pm
Admission by ticket only (if its the same as previous years, tickets are available from the School of Politics office)

Pakistan is also in possession of nuclear weapons, a fact which, in contrast to the bogus concern about phony WMDs in Iraq, the west tacitly supports in return for geopolitical support.

Pakistan is currently a military dictatorship. The current "President", Pervez Musharraf, seized power in a military coup and jailed the former elected leader. He then proceeded to normalise his rule by standing for election, but ensured his own victory by harassing and intimidating opponents. He has changed the law so he doesn't have to give up his military commission, and human rights groups have expressed concern at the growing power of the military within Pakistani society.

The Pakistani army is also involved in internal repression. In spring this year, the army was used as part of a concerted attempt to smash the strike by employees of the PTCL communications company against privatisation.

Human Rights watch reports on extreme violence against protesting farmers in Punjab.
" The starkest example of military impunity came from the brutal repression of a farmers’ movement in Okara district of Punjab province, where tens of thousands of tenant farmers have resisted efforts by the military to usurp their legal rights to some of the most fertile farmland in Pakistan. Pakistani paramilitary forces subjected the farmers to a campaign of murder, arbitrary detention, torture, “forced divorces,” and summary dismissals from employment. On two occasions, the paramilitaries literally besieged villages in the area of dispute, thus preventing people, food, and public services from entering or leaving for weeks on end. In Okara, senior military and political officials have either participated in or allowed violations to occur."

In addition, the Pakistani army has been involved in a vicious and sometimes genocidal campaign against minority groups in Waziristan during so-called "anti-terrorist" operations which breach Pakistan's tribal autonomy laws. The operations have included blockades targeting civilians, and collective punishment of communities suspected of supporting resisters. There are reports of Israeli-style tactics such as house demolitions, assassinations and arbitrary detentions. Pakistani soldiers reportedly evicted tens of thousands of civilians from areas, without any resettlement.

Pakistani human rights activists have expressed concern about the militarisation of Pakistani society and about extreme human rights violations by the Pakistani army.

In the 1980s, the Pakistani secret service was the main conduit for US aid to the Afghan mujahideen, and in effect became an extension of the CIA. In other words, the Pakistani army was almost certainly involved in the creation of al-Qaeda.

Which I think adds up to plenty of reasons for a little bit of constructive action...