It would appear that Derbyshire police is going to use the usual tactic of over policing a peaceful event and hamper anyone who tries to have a lawful protest. Despite the organisers liaising with the local police authority over the anti-Trident work being carried out at Rolls Royce factory, this Monday, Derbyshire Police have applied and got a Section 14 order from the local council. See police statement.

Previously Derbyshire police used Section 14 to control protests at the G8 ministerial meeting in March. According to the local rag there were "A thousand officers from 23 forces" and "policing the event was expected to cost between £1m and £2m", since there were perhaps 100 protestors it cost around £20,000 per protestor... 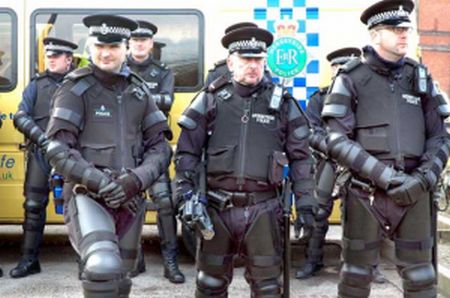 Section 14 can only limit numbers, duration and location for an assembly - it would appear they are trying to limit the protest to no more than 50 people and it's estimated there will be approx. 500 police there on the day. Officially they cannot use it to impose other conditions such as stopping you using whistles, megaphones, giving out leaflets. Nor can they use it to against processions which come under section 12.

Section 14 also does not apply in areas other than the ones specificially designated. Also it is a defense if you did not know about it, for example there was too much noise to hear the police megaphones or you did not take the paper they hand out at protest sites.

The same section was used to try and control the protests at the G8 ministerial meetings in Derby, back in March. The policing was totally over the top and protestors were only allowed to assemble between 10am and 3pm in the Market Square. According to the local rag there were "A thousand officers from 23 forces" and "policing the event was expected to cost between £1m and £2m", since there were perhaps 100 protestors it cost around £20,000 per protestor...

http://news.bbc.co.uk/1/hi/england/derbyshire/4370796.stm
Ten arrests at anti-nuclear rally
A group of anti-nuclear protesters who chained themselves together have been arrested for public order offences outside a Rolls-Royce plant in Derby.
About 40 campaigners are staging demonstrations at the factory to oppose the use of nuclear materials at the firm's Raynesway site.

A rally organiser said 10 activists were arrested on Monday morning.

Derbyshire Police spokesman James Allen said dozens of officers are in the area to prevent any problems.

The protesters said nuclear fuel rods produced at the factory are used in the UK's Trident nuclear weapons system.

Campaigner Zina Zelter said: "If Rolls Royce refused to make the nuclear reactors for Britain's nuclear weapons system Trident, then Britain would be unable to threaten the world with its nuclear weapons."

She called on Rolls Royce to produce an emergency evacuation plan for people living and working within a two-mile radius of the factory.

"Its emergency procedures are regularly reviewed by the NII, which has accepted Rolls-Royce findings that there is no reasonably foreseeable off-site hazard"

Motorists travelling in the Raynesway area are being warned of possible disruption as a result of the planned action.