Amity Night 2 is an evening of live music and art to bring communities together, to raise money for a small Palestinian village and the Pakistan Eartquake appeal. Saturday November 12th 2005, 7.45pm-11.00pm, at The Malt Cross. A night of musical entertainment featuring Mecca 2 Medina, Fat Digester and many more... Nottingham Amity is a voluntary organistation which aims to bring communities together. 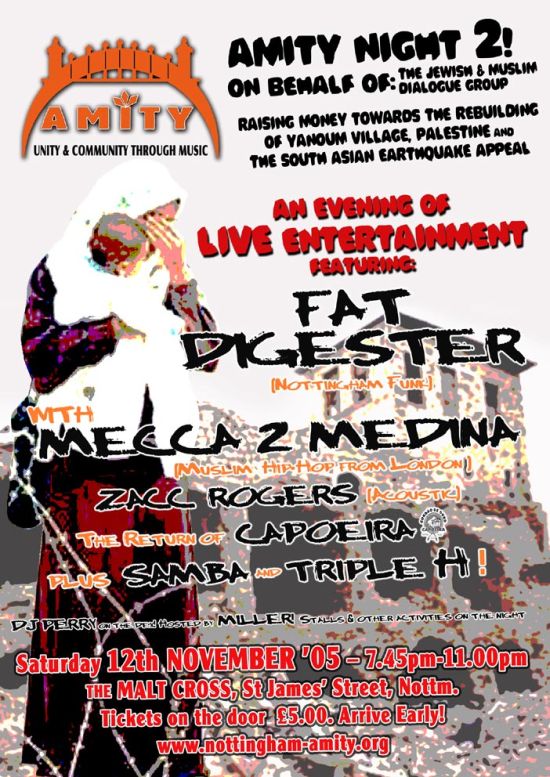 Amity is back for their second fundraising night, in collaboration with the Jewish-Muslim Dialogue Group. After our first successful event in March 2005, we have an evening packed with diverse musical talent, from funk to Muslim Hip Hop, with six artists confirmed and more activities on the night. Money raised will go towards the rebuilding of the Palestinian village of Yanoun, on behalf of the Ecumenical Accompaniment Programme in Palestine and Israel (EAPPI). Part of the money raised will also go towards the Lord Mayor of Nottingham’s South Asian Earthquake Appeal. The Lord Mayor will be in attendance on the night.

Back by popular demand are CAPOEIRA, with their combination of martial arts forms and rhythmic beats; ZAAC displays his unique acoustic skills once again and in-house support comes from the ever-reliable DJ Perry and Blackdrop’s MC Miller.

Headlining on the night is the popular Nottingham Funk band FAT DIGESTER, who are best known for their single “Funky Situation”, and we have a special treat in the form of MECCA 2 MEDINA, a unique Muslim Hip Hop band from London. Also on the bill we have samba rhythms from SAMBA and African drumming from TRIPLE H.

Tickets are £5.00 on the night. Arrive early! Further information and footage of the March Amity Event can be found on our web-site: www.nottingham-amity.org

ABOUT AMITY Amity aims to promote cultural understanding and awareness through music and art. We also provide a platform for local artists and musicians from diverse cultural backgrounds through a variety of charity events. We are a non-profit organisation, with money going to charitable causes, UK based and international. Charitable causes are chosen on merit, and aimed towards groups that are involved in rebuilding and improving community relationships. http://www.nottingham-amity.org

ABOUT THE JEWISH-MUSLIM DIALOGUE GROUP The Jewish-Muslim Dialogue aims to foster tolerance between the Jewish and Muslim communities in the East Midlands and to open up avenues of dialogue, understanding and goodwill, in an environment where different points of view may be freely expressed, appreciated and tolerated. visit their stall on the night.

ABOUT EAPPI The EAPPI is an initiative of the World Council of Churches under the Ecumenical Campaign to support a just peace in the Middle East. Participants of the programme are monitoring and reporting violations of human rights and international humanitarian law, supporting acts of non-violent resistance alongside local Christian and Muslim Palestinians and Israeli peace activists, offering protection through non- violent presence, engaging in public policy advocacy and, in general, standing in solidarity with the churches and all those struggling against the occupation. Further details on their web-site: www.eappi.org