Nottingham Police, allied with authoritarians at the local council and the Home Office, have been wasting taxpayers' money on a wave of offensive posters intended to terrorise dissidents and the socially excluded. This campaign has escalated with attempts to terrorise those involved in subvertising the posters.

Recent instances have included the return of the especially sinister anti-begging campaign, where the state spreads slanderous accusations accusing beggars of bankrolling drug dealers. This campaign has been connected in previous years to deaths of homeless people in cold weather, and to physical assaults on homeless people due to incitement by the posters. The campaign even led to violence and reduced revenue for Big Issue vendors who are engaged in an entirely legal activity. 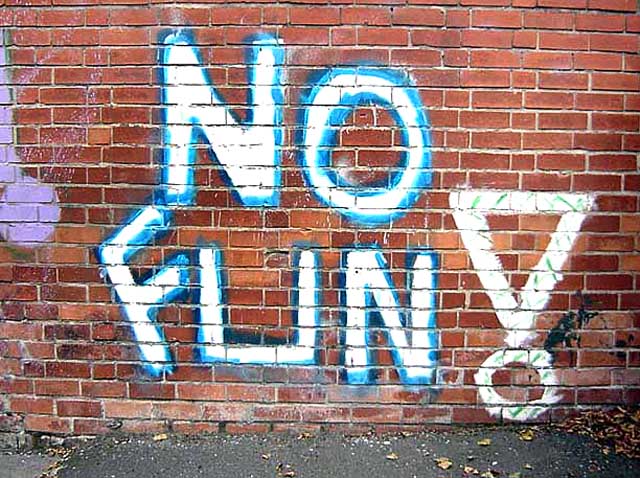 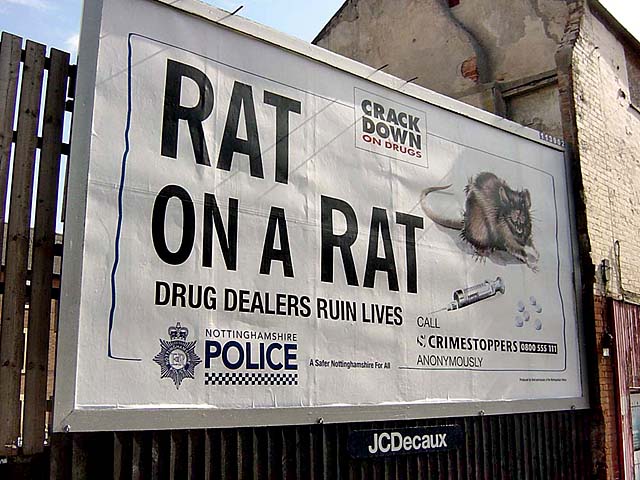 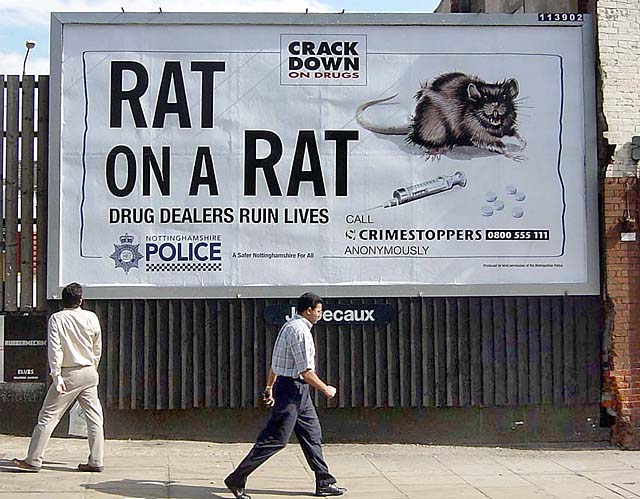 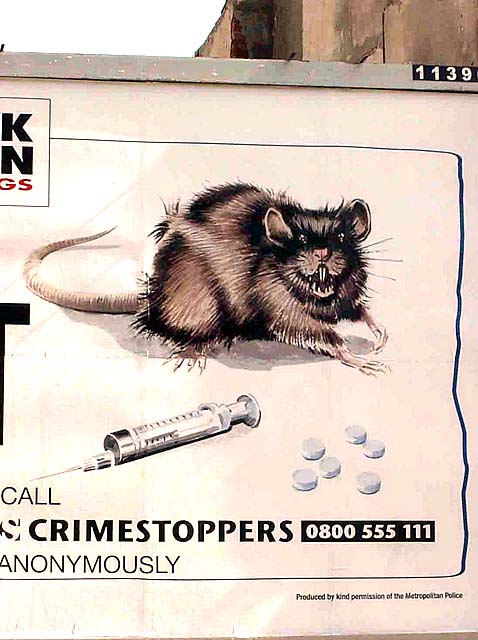 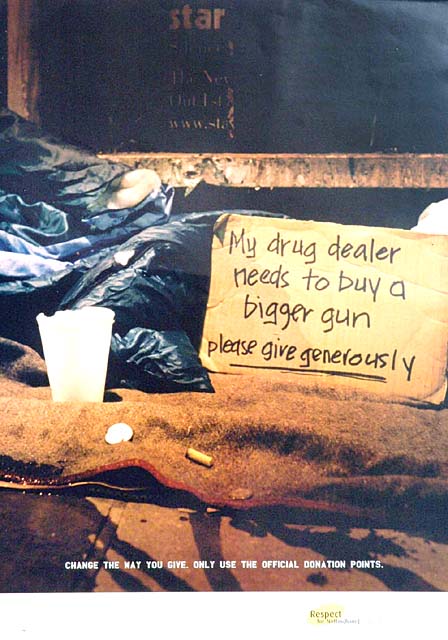 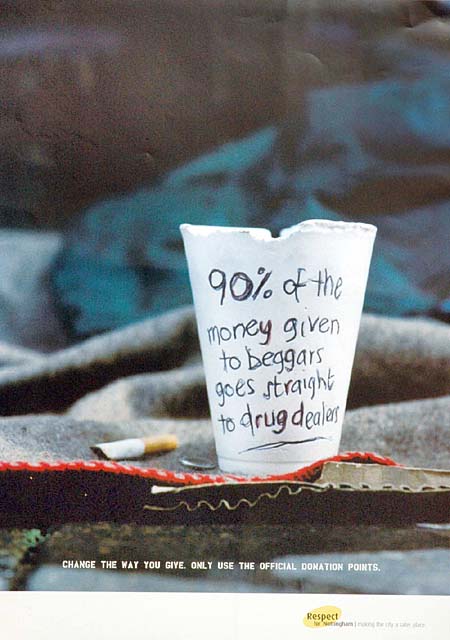 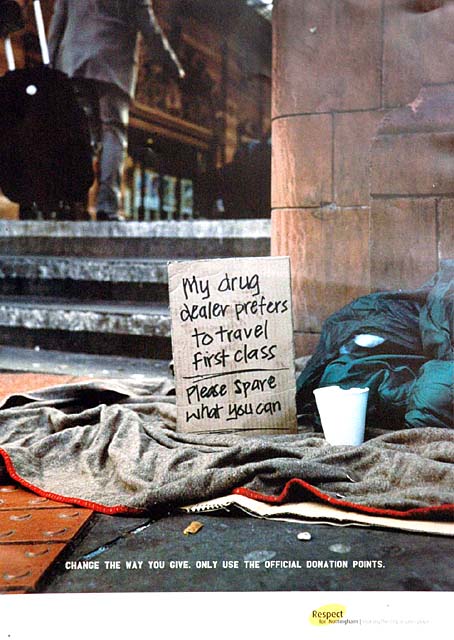 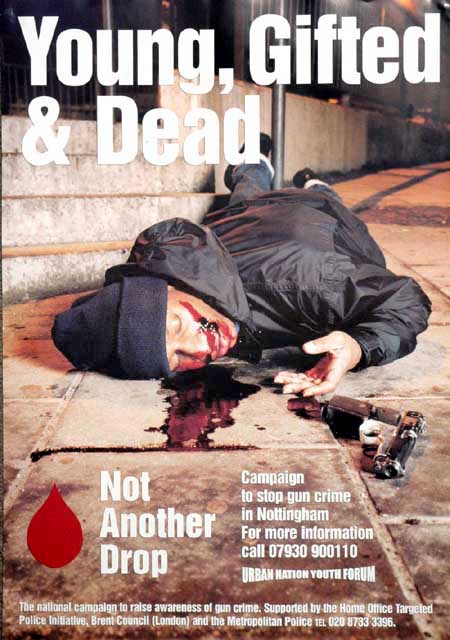 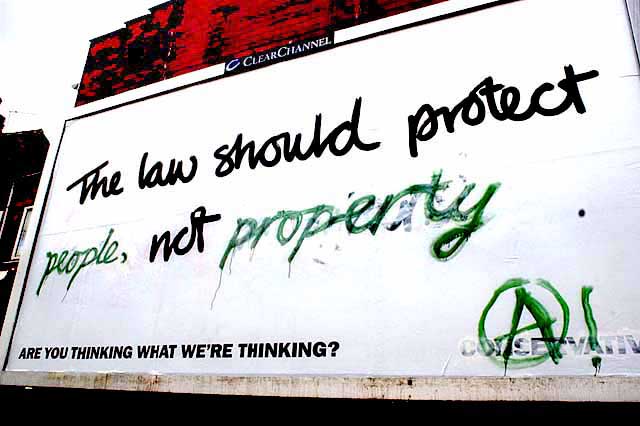 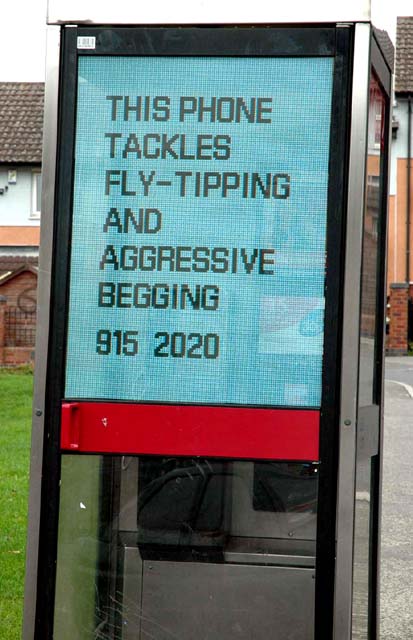 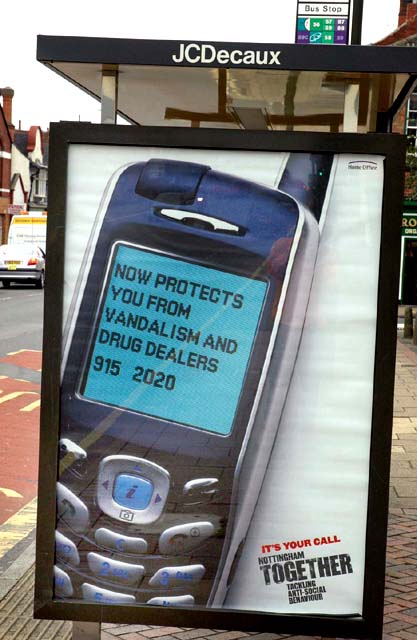 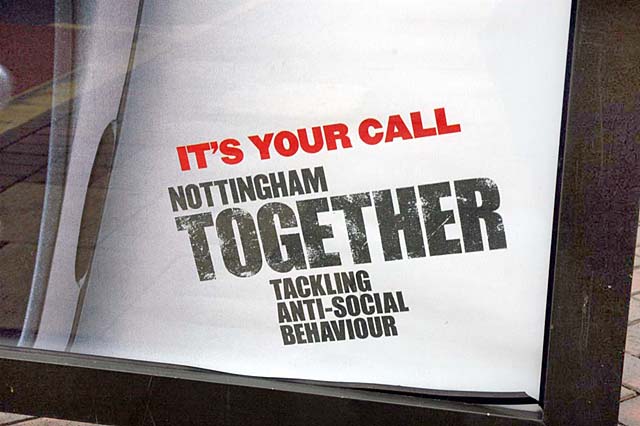 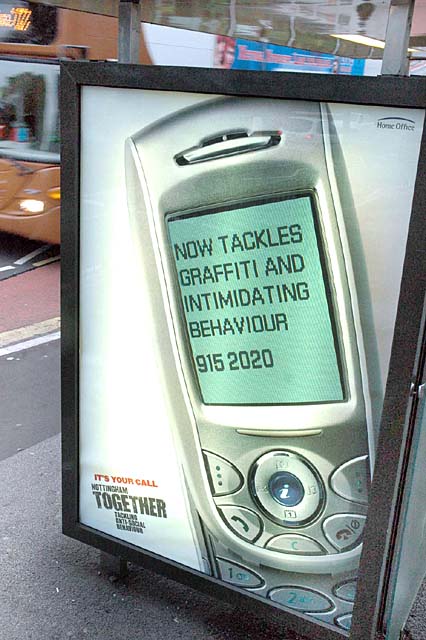 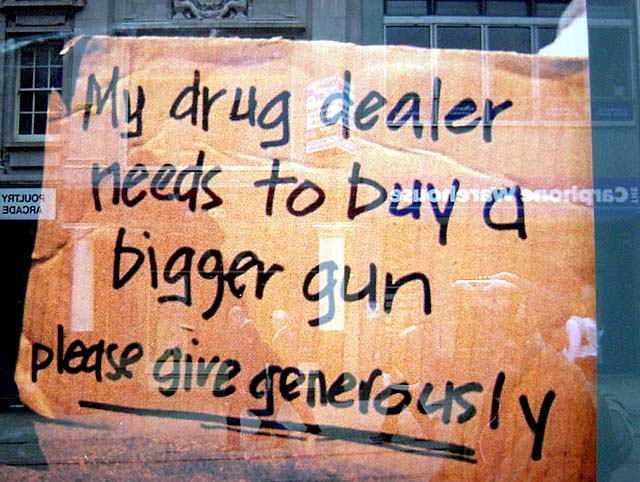 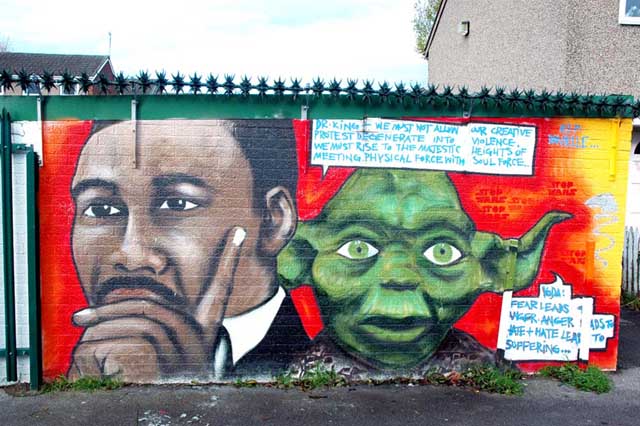 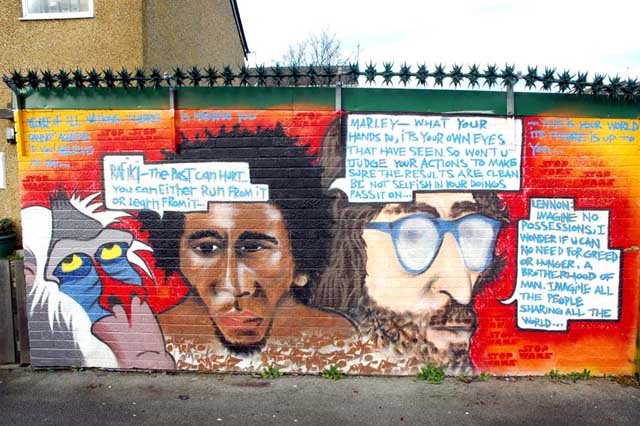 For some time now, Nottingham City Council and Notts Police have been abusing the resources they grab from Nottingham taxpayers to run vicious and offensive poster campaigns directed at demonising and terrorising the socially excluded and stirring up hysteria about petty and mainly harmless deviance.

There has also been an attack on drinkers, with threats to ban people from all pubs in Nottingham if they receive several warnings for being "drunk and disorderly" (a catch-all category which does not require any substantive harmful action, but rather, is subjectively judged by often corrupt and prejudiced police). This is an attack on the lifestyles of many young people, threatening to rob people of their way of life, and possibly cause problems for those who are genuine addicts. Another campaign encourages snitching of petty deviance including graffiti, drug use and even your neighbours - effectively inciting people to form into a region-wide Gestapo snoop network extending the police's already excessive surveillance capacities.

A number of these posters have repeatedly been subvertised over time, with comments such as "no police state", "hands off drinkers' civil liberties", "crackdowns KILL beggars", "give handouts to beggars not overpaid bureaucrats", "Defend civil liberties - abolish ASBOs", "war on drugs = massacre of Colombian peasants", and "the state - tough on petty deviance, soft on war crimes".

Now the state has initiated a new terror propaganda campaign apparently directed against subvertisers, placing posters threatening ASBOs against graffiti artists at locations previously targeted for subvertising. It is always hard to discern motives in statist crackdown terrorism - this may simply be the latest in a wave of consecutive poster campaigns - but the possibility should not be ruled out that the state is deliberately threatening and provoking the heroic people who have stood up to its fascistic policies and dared to speak back against its wall-adorning abuse against the excluded and the vulnerable.

There is an urgent need to respond to this insult from the state. Crackdown culture must be defied and overthrown - the French uprising shows a way forward. The campaign of subvertising of offensive statist posters must continue and indeed, increase in intensity. Any attempts at repressive action against this movement must be met by forceful action against the state and its allies - so that every act of violence bears a cost for the state, ultimately becoming too costly to maintain.

There is also an urgent need to develop a series of locally-targeted stickers for activists to use for speed-subvertising, to minimise risks of detection through surveillance or through handwriting analysis. Ideally stickers should be large enough to cover significant parts of the offending posters, and should target the statist propaganda head-on. Civil liberties versus ASBOs, pro drug legalisation, links of the drug issue to state violence in Latin America, and denouncement of campaigns which lead to violence against and deaths of homeless people, would all be ideal subjects for such stickers, which should be distributed to activists in the area as widely as possible.

It should not be underestimated, the extent to which these offensive state posters constitute a constant source of distress and discomfort for those who are already struggling at the periphery of capitalism. They are an ever-present declaration of dehumanisation and menace, a constant "conform or else" thrust into the vision of the system's enemies at every opportunity. They are, in short, a source of harassment, alarm and distress for those of us who genuinely value our civil liberties and who are offended by the constant liberticidal attacks made by an ever more aggressive and draconian state machine. In fact if the state consistently applied its own laws then Nottingham Council and Police would be in jail for causing harassment, alarm and distress, both to the bigots whose existing state of hysteria is exacerbated, and to the freedom-lovers who are offended at this constant assault on our visual senses by statist tyrants.

A triumph of hearsay and hysteria

Look at the broader issue about it though...

Hi,
You make some interesting points in this article, but I think that drug dealers need to be stamped down on, as they are NOT helping the truly homeless in any way, they are making it worse. However, I do agree that a lot of 'beggars' are genuinely homeless, yet the government is not doing anything about derilict housing that could be overhauled and used to house such unfortunate persons.
Big issue sellers do a perfectly legal job, except it can get relitavely annoying when they harass you to buy a magazine you don't even want to read!