A £100 million redevelopment is to turn Trinity Square into a new shopping heaven. The City Council in its press release: "Retailers already announced to open stores include Borders Bookshops, TK Maxx and Dixons, who will open some of their largest town centre stores in the UK totalling 100,000 sq ft of retail space and discussions are in progress with a number of other top retail names." 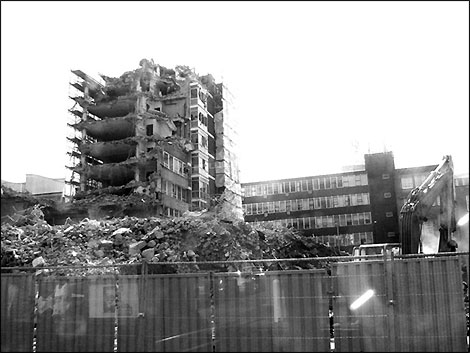 The transformation of part of the city centre into a shopping and leisure destination takes a dramatic step forward this month as one of Nottingham’s ugliest buildings is consigned to history.

Trinity Square car park is set to close on Thursday (January 12th), with the last entry to the car park at midnight on Wednesday (January 11th), ready for its demolition later this month – heralding a new era for the area once two new buildings housing shops, cafes, restaurants, student accommodation are developed. They will be linked by a paved area and a public square with pavement cafes. The £100 million development – which has already seen the demolition of the equally ugly Birkbeck House and British Land House – will also include a modern car park to replace the loss of the existing Trinity Square facility.

The striking 11-storey north block and 6-storey south block buildings being developed by Helical Bar plc and its joint venture partner Overton Developments Ltd, will transform the streetscene near the Victoria Centre and Cornerhouse complex.

Jim Kelly, Managing Director of Overton Developments Ltd, said: “The development is already 60% pre-let. Retailers already announced to open stores include Borders bookshops, TK Maxx and Dixons who will open some of their largest town centre stores in the UK totalling 100,000 sq ft of retail space and discussions are in progress with a number of other top retail names.”

Councillor Alan Clark, Portfolio Holder for Development, Land and Regeneration, added: “This is an exciting development which will add to the retail and leisure mix the city centre offers, while reshaping a part of the city which was looking tired and under-used.”

The development is closely linked to the £11.7 million Government funded Turning Point road scheme which transformed Milton Street and part of Parliament Street into a pedestrian friendly area with access for essential traffic only in July 2005. Traffic levels in the area, excluding public transport, have reduced by 90% since the introduction of these changes. The last phase of the scheme is set to re-start on Monday 16th January and be complete by the end of the year. This will include high quality paving on Milton Street outside the Victoria Centre, pedestrian improvements on Parliament Street and resurfacing Milton Street and Parliament Street.

Customers using the Trinity Square car park, which remained open during the busy Christmas and New Year period, have been advised about the closure through posters and leaflets from November 2005 and in the run-up to the closure, a further 10,000 leaflets will be distributed to car park users highlighting nearby alternative car parks and other parking options available to them. Assessments have shown that there are ample spaces available at other city centre car parks, a further 4,000 spaces at two bus Park & Ride sites and five tram Park & Ride sites and over 1,400 on-street Pay & Display parking spaces

For the first days and weekend around the closure, Council staff will be on hand to offer parking advice and extra road signs will re-direct motorists to other car parks, while existing road signs directing motorists to Trinity Square will be removed or covered over.

The new Council-owned car park, part of the new building which has already started to emerge from the Birkbeck House site, will have more than three times the number of dedicated spaces for blue badge holders and an equal number of general spaces compared to Trinity Square. There will also be cycle lockers, a cycle cage and new public toilet facilities. The new car park is expected to open by the end of 2006.

• The demolition of the car park has also prompted the relocation of the Traffic Control Centre and Travelwise service from the car park’s basement to a new facility at Lawrence House.