The Japanese Water Gardens in Stapleford, Nottingham have repeatedly hosted the Great British Circus, which has a record for animal cruelty. Nottingham Animal Rights are asking the owners of the Gardens to ban this circus from their land until it stops using animals in its acts. 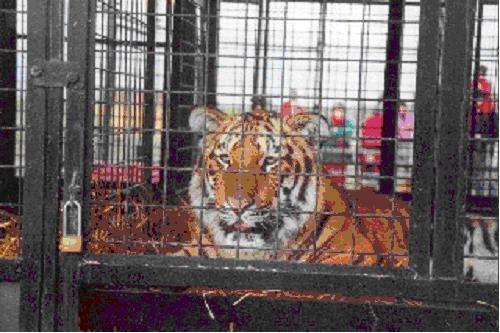 Nottingham Animal Rights and End Circus Cruelty plan to picket the Japanese Water Gardens in Stapleford, Nottingham on the evening of Friday 10 February and the afternoon of Sunday February 12, in protest at the presence of the 'Great' British Circus. Further protests are planned during the circus' visit (10-26 February)

The 'Great' British Circus is one of the last UK circuses to use 'exotic' animals. As Circus Harlequin, they featured heavily in Animal Defenders' damning report 'The Ugliest Show on Earth': incidents included a sick lioness being hidden from the RSPCA.

Many people now accept that the use of animals in circuses is cruel and outdated. An investigation in 1997 found abuse of some kind or another in the majority of British circuses. For this reason, animal circuses are banned from council land in Nottingham and Broxtowe. However, the owners of the Japanese Water Gardens still make them welcome.

Please contact us for demo details or see details hee.

This picture is awful. I mean how would other people like to be treated like this! Humans would have to be so cruel to do something like this. I dont know how they can do it!