today saw the launch of the campaign to stop the M1 being expanded near nottingham. 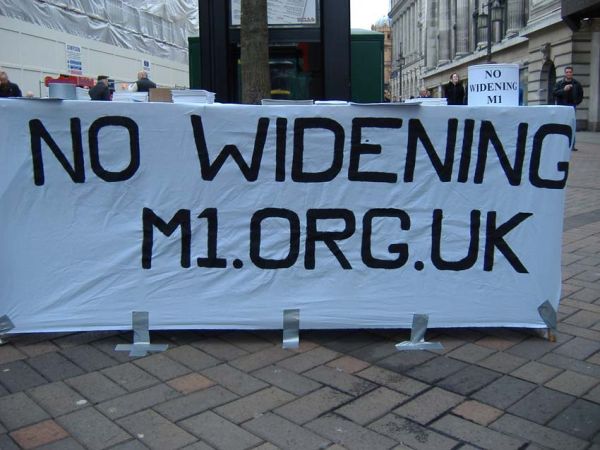 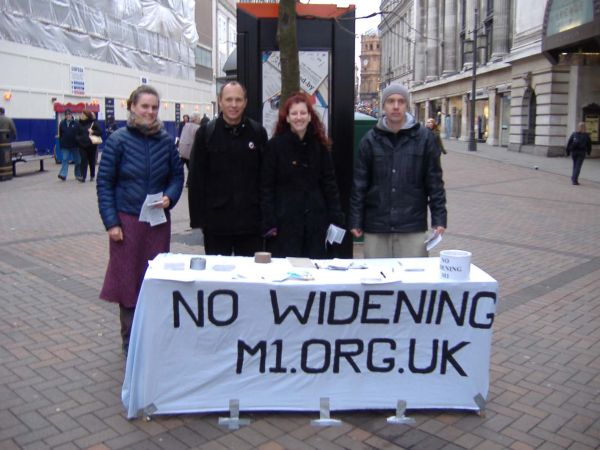 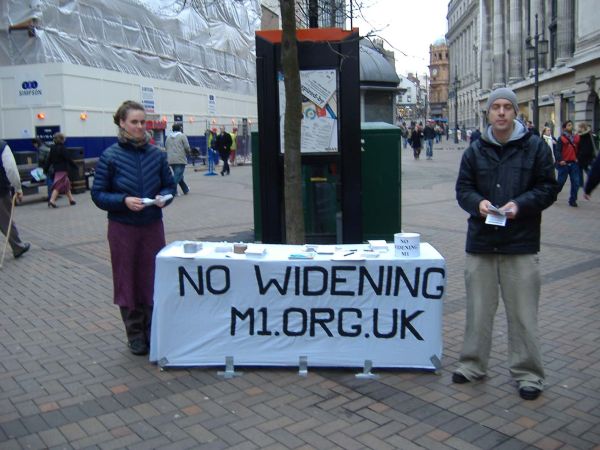 Today we launched our campaign of opposition to the M1 widening.
Response from the general public was pretty good, and the local radio station came down to do interviews about the campaign.


The Department of Transport has announced its intention to widen the M1 from Leicester to Leeds (junctions 21 - 42) to 4 lanes in both directions. There is also widening planned for junctions 6a-13 (M25 - Luton).

The proposed works are estimated to cost over £3 billion. Road programmes frequently exceed their estimates by a factor of three.

Air Pollution and Noise
There are many towns and villages along the M1 - many of these already have problems with air pollution and increasing traffic will make this worse. Pollution from traffic has been shown to increase respiratory problems such as asthma and chronic bronchitis. More people have heart attacks when air pollution levels are higher.

Road Traffic Accidents
Over 3,000 people are killed every year on roads in the UK, and a further 200,000 injured. Encouraging more people to drive on motorways will not improve road safety.

Climate Change
This is already happening - freak weather events are occurring far more often and the pattern of our seasons is changing. Left unchecked climate change will cause droughts and famines. Floods will leave thousands homeless and without land to grow crops. Only a massive reduction in our CO2 emissions can stop this nightmare scenario occurring. CO2 emissions from road transport are actually increasing and currently constitute 18% of all greenhouse gas emissions.

Oil is running out.
The need for oil has already fuelled many conflicts. No-one knows exactly when the oil will run out altogether, but the sooner we end our dependence on oil, the better.

Everyone knows investment in infrastructure pays off.

What are you trying to achieve?

response to the uninformed

A constant theme from those proposing road construction is that roads are needed for
the economic development of a region, especially those regions far from the centre of markets.
The secondary message is that roads are good value for money as they always create
jobs. Both are a fallacy.
Roads do not always create jobs and when they do it is not always in the peripheral areas of the economy were the economic development is most desired. In fact following the construction of a road there is evidence that large businesses no longer need to undertake operations in more remote areas and can use their large-scale centrally located operations to supply the peripheral market now easily accessible. In these circumstances the road aids the economies of scale of a large enterprise but in so doing reduces employment in the peripheral area.
Another scenario happens when a new road link gives large enterprises access to peripheral
markets where they had previously not been active. Local businesses then find it hard to
compete with the large-scale enterprise with its economies of scale. These local businesses then either have to find economies of their own by reducing costs - which normally means reducing the work force - or they go out of business entirely. Thus in remote locations that either already have or do not have large-scale enterprises active in their area, the opening of a new road is a potential threat to their economic development and well-being, not a boost.
It is the characteristics of an individual area, its economy and the nature of the road that will determine the economic impact of a new road. There simply is no hard-and-fast rule that says new jobs will flow from road construction.
Whether road construction represents good value for money really depends on who you
ask. Investments of public money into infrastructure certainly offer good value to large-scale enterprises when the infrastructure is frequently free for them to use and maximises the market advantages of their current investments. But they certainly are not good value for money for citizens of remote areas when they can increase local unemployment.

Surely given the risks of global warming, investment in infrastructure should be in the railways which are likely to have services cut in the near future. We also need to think of another way of measuring the "success" of a country rather than in economic terms. If two cars crash its great for the GNP cos money has to be spent clearing up the mess, fixing the cars or buying new ones and gives work for insurance companies, the police etc. I'd sooner see less car crashes.

Well they are doing somthing right

http://news.bbc.co.uk/1/hi/england/nottinghamshire/4688430.stm
Keep up the good work

Some people are really ignorant

Even though vehicles travel faster on motorways, it's a well known fact that motorways are the safest of all road types.

One of the worst problems in this field is THE CONGESTION OF TRAFFIC!
Traffic jams on motorways and other roads, as well as people driving around loooking for an empty parking space are phenomena we need to counteract.
This we ought to do by building more and better roads, increasing parking options in cities, AS WELL as investing in public transport.
If we look at Europe, each and every european country should take in the development of an all-european, high speed train network.
Together, we've got sufficient economical means.

About GNP vs the environment etc:

There are several myths connected to the relation between GNP and enviromental issues.
One is that increasing GNP is detrimental to the environment.
This is ridiculous.
Compare Scandinavia to Russia.
The scandinavian countries are among the richest nations on this earth (GNP per capita wise), all the same few countries enjoys a healthier enviroment than these countries. Especially Sweden and Finland have heaps of large industrial plants of all sorts. A lot of these production activities are potentially harmful to ecosystems locally and globally, but through advanced technology, the negative side effects of the succesful scandinavian economy are at an all time low!
Scandinavian governments, municipalities and companies can AFFORD to invest in preserving the enviroment, in a country like Russia decision makers feel they can NOT.

Someone above mentioned that accidents have a beneficial effect on the economy.
I beg to differ. Let's say two cars collide and two people die and two become disabled. In that case it's true that health care involved, payment of insurance money and so on contribute to the GNP, BUT:
1. The value of the cars are heavily reduced.
2. The loss of (long term) production capacity in terms of manpower is significant. 3. The loss of consumption power is obvious in the cases of the deceased.
4. Accidents often block traffic which causes negative effects on the overall economy (people not coming to work on time, businesses etc not getting deliveries in time - which could cause production halts and so on)

Cars, motorbikes and lorries won't go away.
What we CAN achieve is the reduction of the harm they cause in different areas.
Modern motorways means enhancement of transport safety levels, enhancements of the efficency of the national econonomy and to the extent they reduce traffic jams, reduction of pollution levels and global heating.


Err well actually I think you’ll find they will

yeah of course we need more motorways, how about taking my garden as well ?

There are alternative energy sources you know.

I guess we'll still be driving some sort of cars in say 100 years from now, even though we might fuel them with something else. These alternatives and the technology needed already exists.

Lets put this in perspective

Ok lets's put this in perspective.

The British goverment, that well known radical enviromental group, agrees with the international scientific consensus that anymore than a two degree centigrade raise in global tempreatures, will cause postive feedback mechanisms, such as the decomposition of the tundra peat bogs, allowing 1,000s more tons of carbon into the atmosphere, causing runaway global warming.

An atmospheric concentration of carbon of 400 parts per million will cause at least two degrees rise in global temperature.

We have 10 years to reduce our carbon emmissions to almost nothing if we are going to escape runaway climate choas, with the corresponding, ecological, social and economic collapse.

We can't be driving cars in ten years time.

We all need to wake up to the scale of the problem now. Considerations like jobs to the area and GDP, mean nothing if the face of this problem.

Biodiesel has a higher calorific value, than petrol chemicals, which means it stores more energy, bio ethanol lower calories than both. But theres no way we can make enough for all cars & industry we have today,especially if China keeps following our example, we would just be paving way for more stripping of the environment globally.
Scandanavian countries,unfortunately like other industrialised countries rely on the destruction of the environment globally,war & slave labour.
Hydrogen fuel cells rely on carbon or nuclear fuels to make energy for them to store.
The powers that be hark on about nanotechnology also, the nanobox is even more of a threat than nuclear or climate change, even Royal Society are worried about its lack of regulation. Even nano pioneers like Dr Dressler & Proffessor Warwick admit they may destroy all carbon based life as we know it, so anyone thinking that this is saviour for car culture wake up! www.etcgroup.org,uk, www.corporatewatch.org.uk

PUBLIC TRANSPORT,ALL FORMS OF BIKES ARE FUN, MORE ROADS =MORE CARS WHICH KILL THEM AS WELL AS CREATING GLOBAL WARMING
We dont need more cars, we need a well organised low impact,local,respectful way of live in harmony with our communities & environment that has been done for millinea in many countries with people living long healthy sustainable lives with more time to relax & play.There being many examples in asian & "backward" indiginous cultures like native americans, etc, dont believe often racist lies about other lifestyles, in UK working people fought back against being forced into living in industrial slums & low quality housing estates as opposed to living a more relaxed country life.People are still resisting in China & allover the world, major roads are still the first move made against all of us.
A vegatarian & hunter gathering diet can feed people healthily & sustainably without the need for more freight & roads also. Meat farming creates methane & needs more than 10times more land to produce, destroying biodiversity & forests,creating viral soups as proven with avian flu repeatedly in last century. H5N1's crossover to people has origins in wildfowl industry, the most likely crossover to people is via those working with poultry as RSPB & many doctors are saying, governments as with roadbuilding are lying & misguiding people to protect suicidal greed