NEMA roadshow was at the Victoria Centre promoting its Draft Master Plan for increased growth. 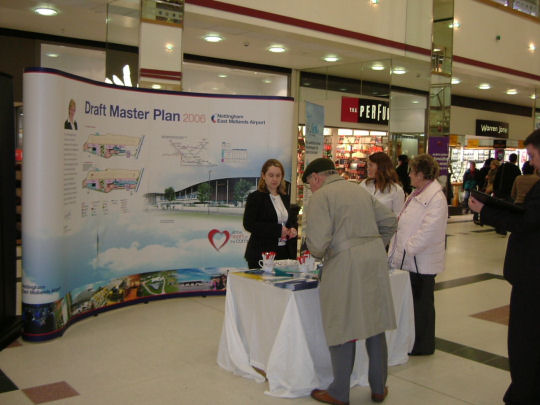 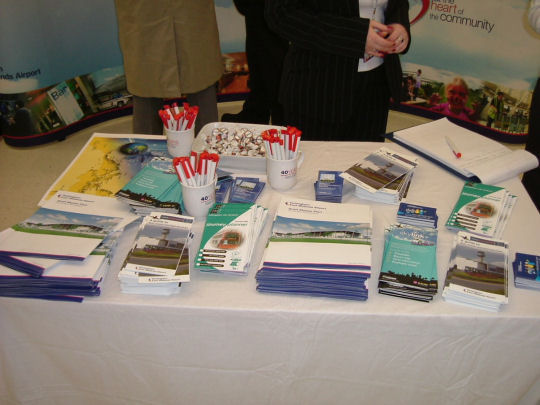 The NEMA roadshow was at the Victoria Centre in Nottingham today. As I happened to be passing (and happened to have a camera) I thought I would pass on some of the interesting facts I learned about this major contributor to climate chaos the economy.

This taken from one of their very glossy leaflets: -

NEMA is within 4 hours truck drivetime of 89% of England and Wales.

UK business increasingly relies on next day access to world markets that can only be provided by express air cargo.

On the environment, they clearly have our best interests at heart. To quote again (comments in brackets added by the author): -

“NEMA is a responsible airport operator which listens to its communities, and (here it comes) seeks to balance as far as possible their needs against the airport’s wider economic and social (?) responsibilities.

NEMA received the prestigious National Business award for environmental awareness (Hurrah! they are they are aware there is an environment) in November 2003 (but not in 2004 I note).

NEMA supports emissions trading as a first step in reducing aviation’s global impact on the environment (not at all influenced by the fact that there is money to be made out of this greenwash scheme).”


(PS this is a quick and admittedly flippant article. A deeper analysis will be given when we have had a chance to study NEMA’s Draft Master Plan in more detail.)

I was against the aviation industry causing climate chaos that will probably blight the lives of future generations... 'til I got my FREE PEN!!!