The idea was to build a multi-person contraption, partly inspired by the famous Rinky-Dink. It is expected that it will bike about with Critical Mass and similar matters ....

Instructions and Diagrams [download to print off] - application/msword 92K 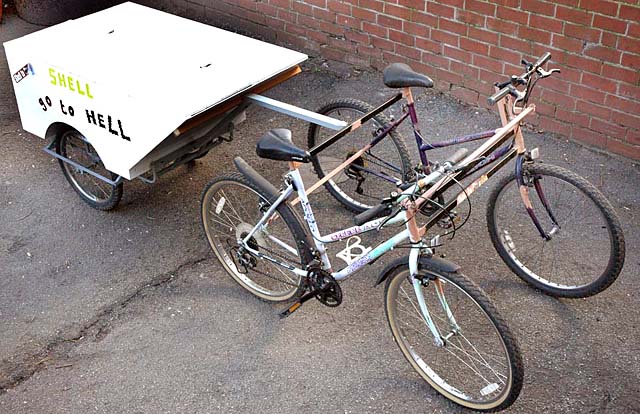 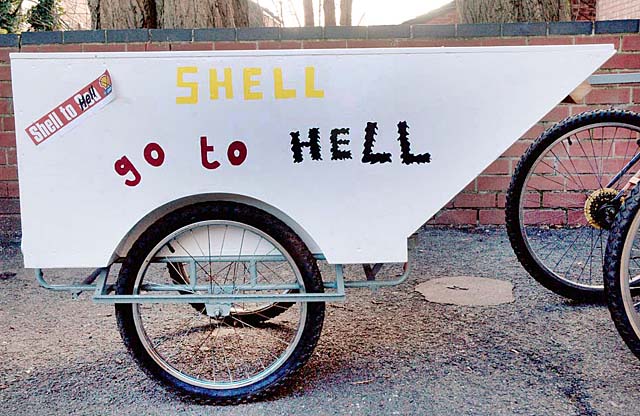 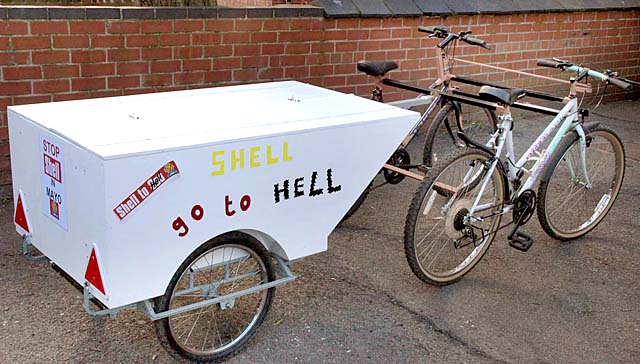 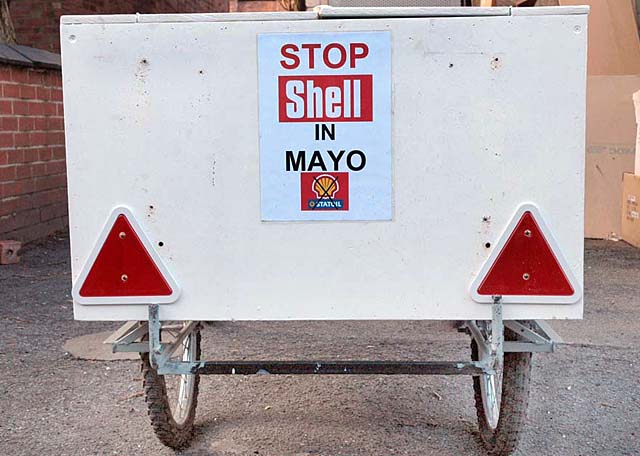 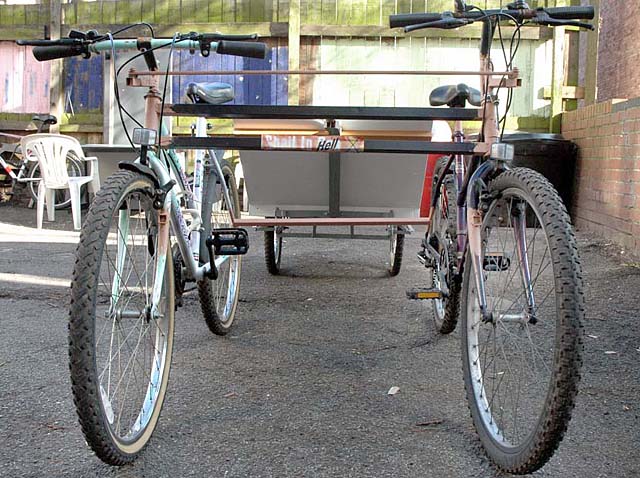 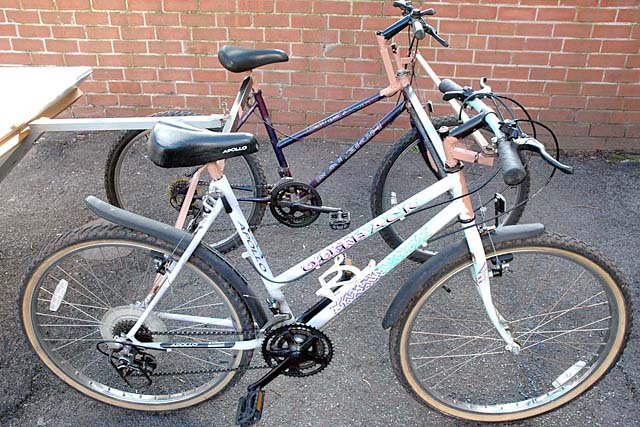 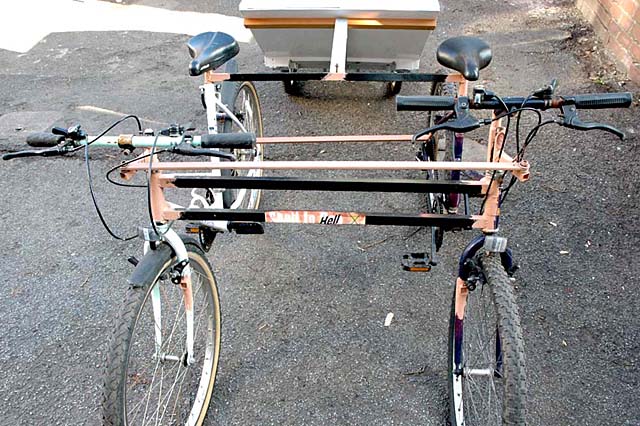 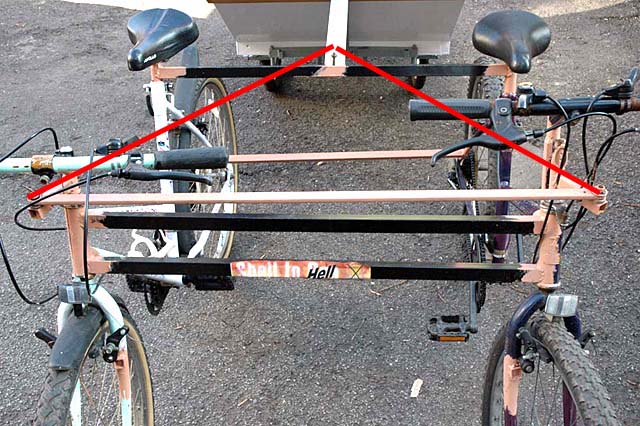 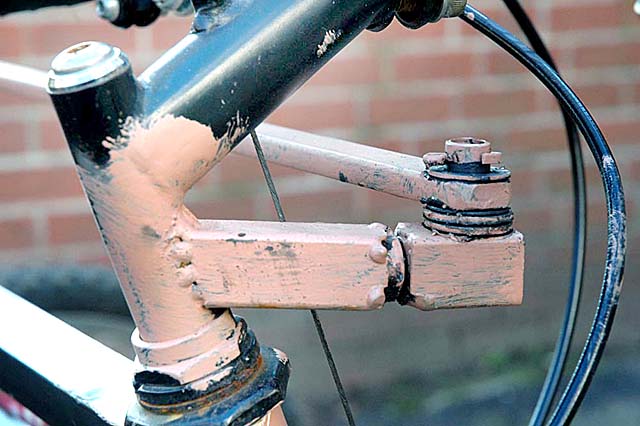 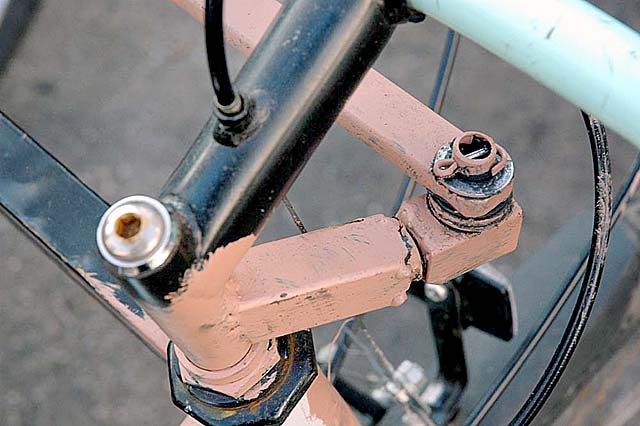 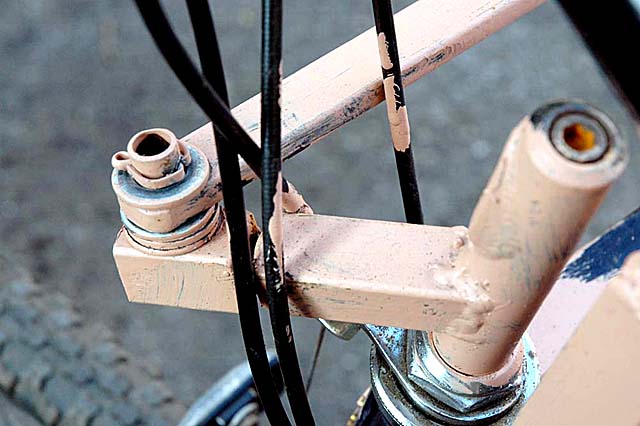 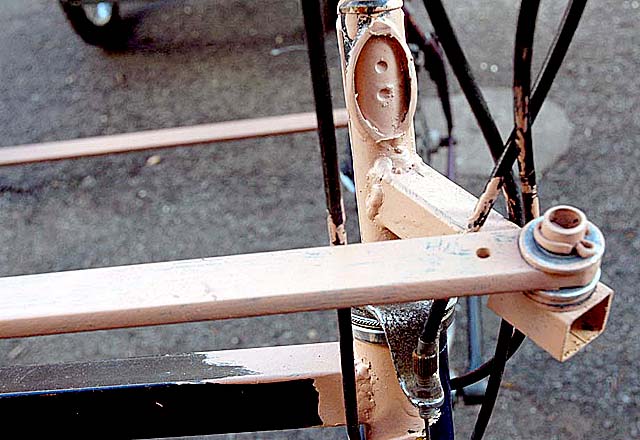 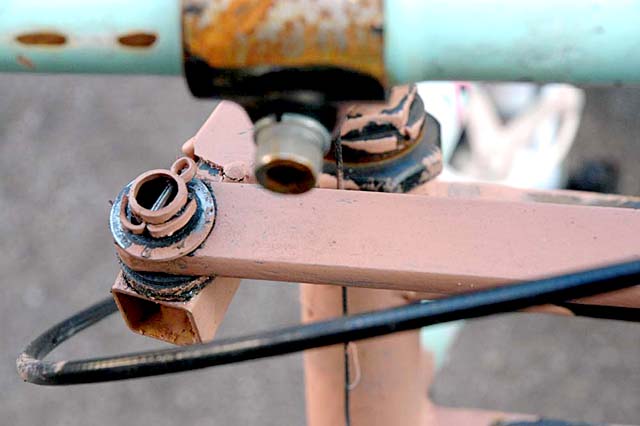 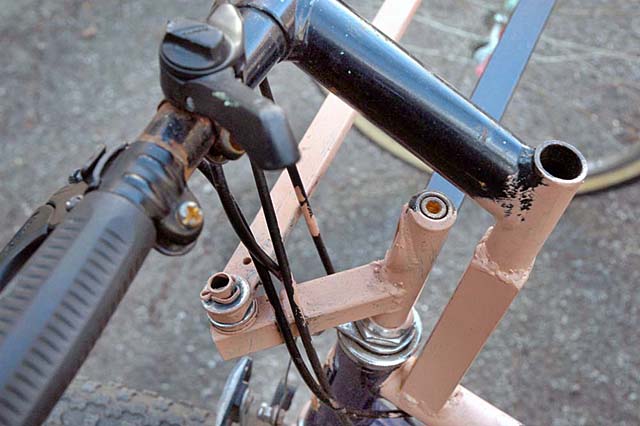 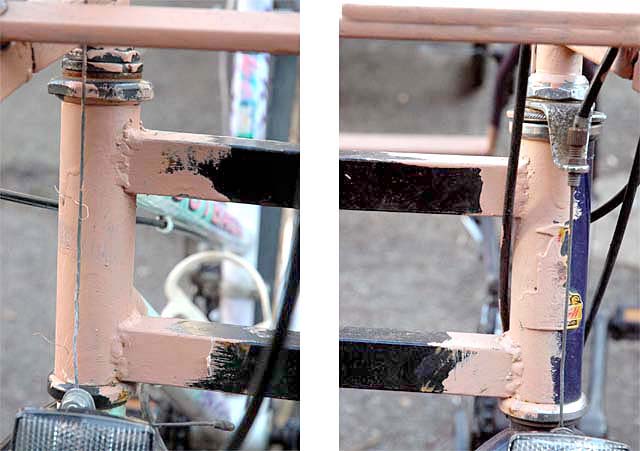 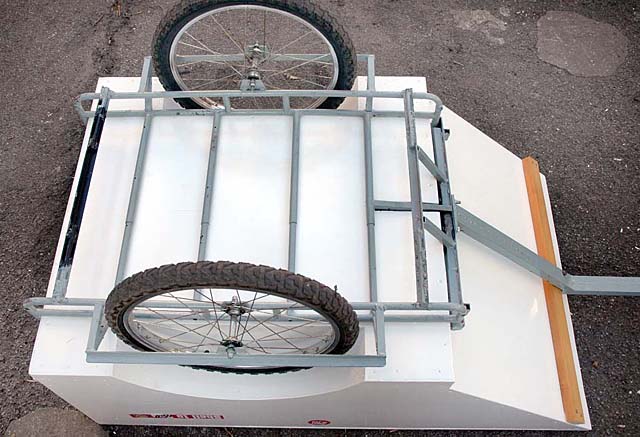 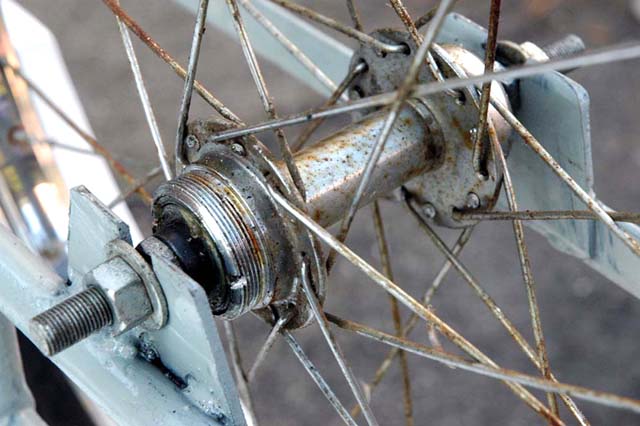 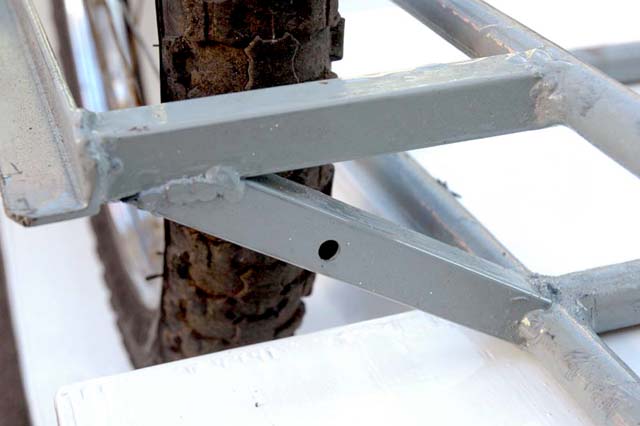 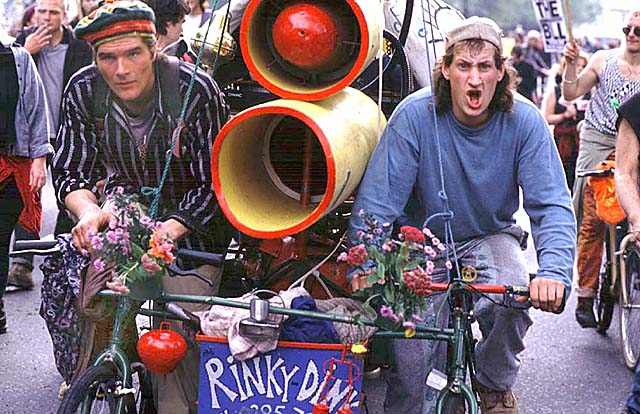 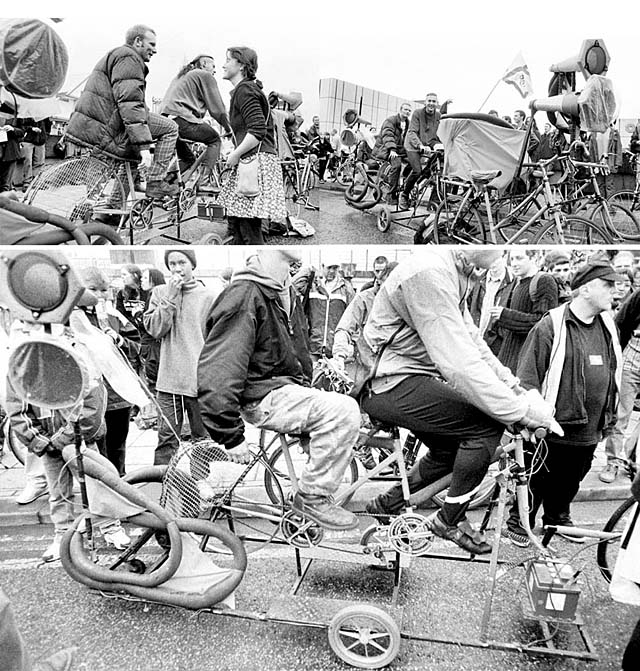 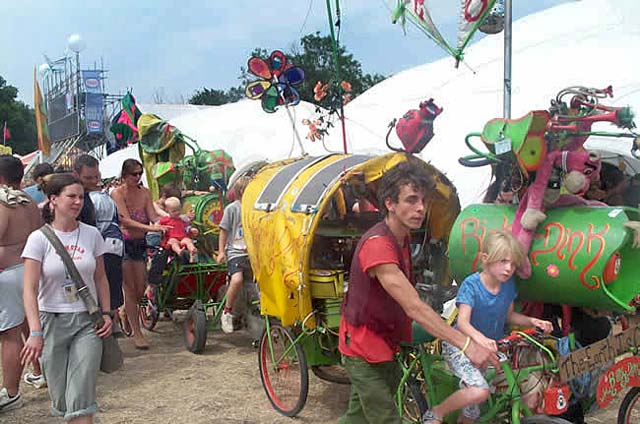 One idea was to build a multi-person contraption, partly inspired by the famous Rinky-Dink.

I truth we don't have an overall plan or design for the finished machine - it will evolve as it grows, based on the ideas of the people who want to get involved in the project (its open to anyone to join the project). One idea, for example, is that it could be used to carry tea and cakes on CMs and other 'actions' (we are in Veggies territory after all). Given the high density of IT boffins and Notts Indymedia people involved it could also perhaps include internet access and enable live news updates, promote Indymedia etc. It almost goes without saying that it should include a sound system. A sort of people-powered mobile internet café. But who knows what it will evolve into.....

How we got started and where we are up to

The easiest way to get started seemed to be to take two complete standard bikes and join them together side-by-side with several steel tunes. So this is what we did.

Firstly we selected two almost complete ladies mountain bikes. These are pretty rugged, have some low gears so would be suitable when we added more weight later, and the steel frames are chunky enough for welding. We also wanted to avoid bikes with a high cross-bar because the cross pieces we would be attaching might restrict swinging a leg over the saddle.

To decide how widely the two bikes should be separated we took the pragmatic approach of getting people to sit on them in the riding position and brought the bikes together until the rider's elbows were just missing each other.

It was then a case of asking the rider to rotate the pedals and marking the fixing points for the bars that would join the bikes together so that they would not restrict leg movement while pedalling.

Next, to make the cross pieces, re-cycle the steel frames from some desks that were being skipped at a mate's workplace; out with the mig welder and hey presto we had a two person machine. Except.....

How do you sort out the steering?

If the thing was to turn corners it was necessary to link the two front wheels so that they turned at the same time. So, we welded a short piece of tube, which projected forward, onto the handle bar tube of each bike (the steering arms). A hole was drilled in the end of each and a joining length of bar (the steering link) was bolted between them. The bolts were left slightly loose so the arms could rotate relative to the steeri g link.Then we wheeled the thing forward to find it would not steer at all!

There were two problems....

This sounds technical but the solution is straight-forward.

If you imagine two bikes side-by-side going round a corner, the bike on the inside is actually going round a smaller radius than the bike on the outside. Thus the front wheels of the inside bike has to turn more than the one on the outside. This is illustrated in the picture below, which shows the principle applied to a car but it's exactly the same wheel layout as the two bikes.

We had been aware of this principle at the outset but had optimistically hoped that the smaller footprint of a bicycle tyre might allow sufficient tyre-slip to let us get away with it. It didn't.

The solution is in theory simple (but fiddly to do in practice). The steering arms have to be fixed to the handle bar tube at an angle so that, seen from above the left hand one points to the left and the right-hand one points to the right. In fact the way you set this up is angle them so that if they were projected rearwards they would cross in the exact centre of a line drawn between the axles of the two rear wheels. I think an illustration is called for.......

Having done this it still would not steer due to.....

The reason you can take your hands off the handlebars while travelling forward and the front wheel doesn't flail from side-to-side is due to the caster angle of the wheel and headstock. While the non-vertical arrangement of the headstock is helpful for this it is a hindrance when we link the two handle bar tubes together. It means that the steering arms, when viewed from the front of the bikes transcribe an arc in the vertical plane as the handlebars were turned from one side to the other. And, because by design the arms are not at the same angle to each other throughout the turn, each is on a different part of the arc. Therefore they were in effect fighting each other when linked in this way. The answer was to provide a means of introducing vertical flexibility where the steering arms are connected to the link rod.

This we did by cutting the steering arm on half, welding a large nut into then end of one half (it was box section tube) and a bolt projecting out of the other. The two halves could then be joined back together by screwing the bolt into the nut but only so far that the two halves could still rotate relative to each other. This was effectively a simple swivel joint.

The next stage was to disable one of the sets of handle bars so that only one of the two riders steers. This not only avoids arguments but reduces the stress on the steering system. We cut off the handlebars from the left hand (nearside) bike so that only the stem, with steering arm remained. A new dummy stem was welded to the cross bar just behind the steering stem and the handle bars, complete with gear and brake controls attached to that.

Riding the new machine was rather strange. It does not lean on corners (unless you are riding it alone in which case the inside bike lifts off the ground if you take left-handers too fast - those of us with motorbike and sidecar experience will be familiar with this!). But the really odd experience if felt by the rider whose handle bars are fixed as they see their front wheel turning left or right!

The machine as it stands has had a few successful outings and certainly draws attention from people as it passes them. At the moment this attention is often focussed on the startling behaviour of the left hand wheel as it oscillates madly (although only a few degrees) from side to as the bike travels in a straight line. This is due to slack in linkages in the steering assembly, which we felt was necessary to allow for any errors in our geometry or construction. However now that we know it works we are going to replace the home made swivels with ball joints re-cycled from a late sixties VW Beetle steering system.


The trailer
The chassis for this has been recycled more times than (your joke here)
It started life as a car roof rack. Then was made into a wheeled trolley that was Mr Greed's factory at the G8 event in Derby. It was then transformed into a detention centre for a No Borders noise demo.

Brackets were made to fit the wheels from a defunct child's bike (the bike was defunct not the child) and a wooden box built to sit in top of this. It hooks onto a bracket that is attached to the cross bar under and between the two seats of the bikes.

The top of the box was hinged lengthwise so that when we arrive at places they can fold out flat and become tables. The sound system is demountable and the speakers screw to the rear of the trailer.

There's loads of fun things yet to do: -

and anything else people want to do!

Rinky-Dink [how it all works]


Making flags and decor for Nottingham's Critical Mass Bike About

Great work people! I'll see you in the streets.

Here are the missing diagrams

The text refers to a couple of diagrams which are not shown in the text. See the attached word doc at start of item or see pdf version (which I've hopefully successfully attached)

What a cool vehicle, and some ingenious bits of improvised engineering too! It's got me thinking about other alternative vehicles that could be made out of bike parts. Perhaps a brainstorming session sometime?

if a little ugly