A troop of Robin Hood and Maid Marian monkeys, were monkeying around the Nottingham Castle and Broadmarsh Shopping Centre, to draw the public’s attention to the plight of primates in laboratories, in Nottingham and other cities throughout the UK and EU. 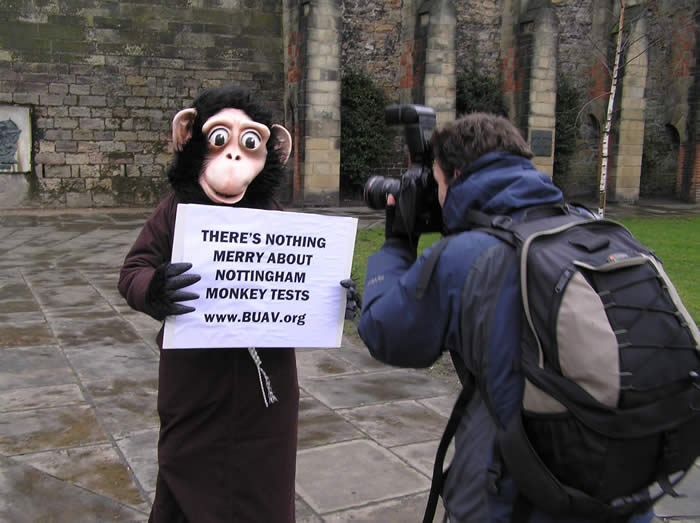 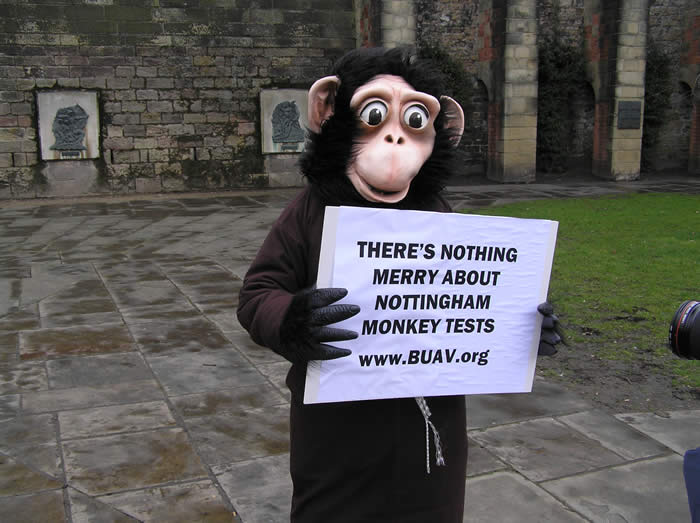 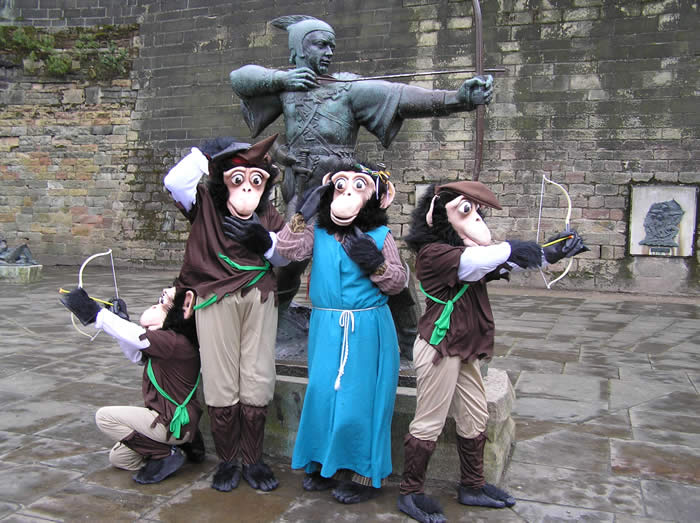 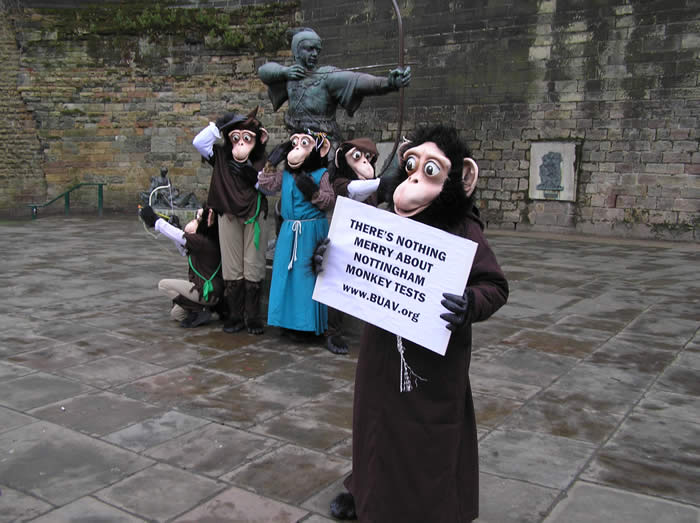 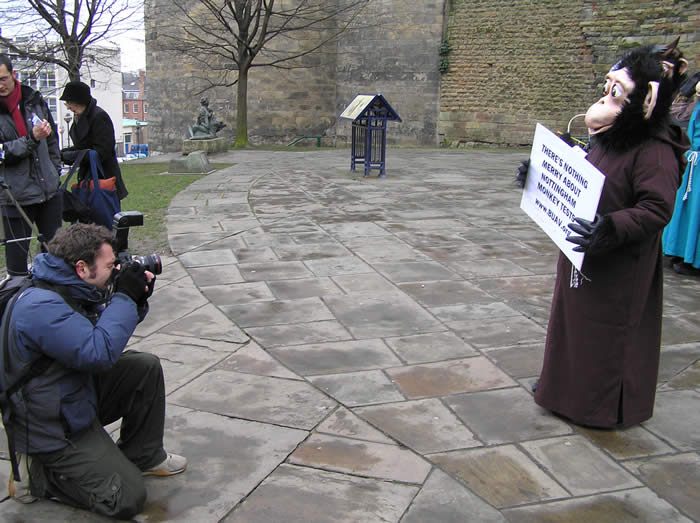 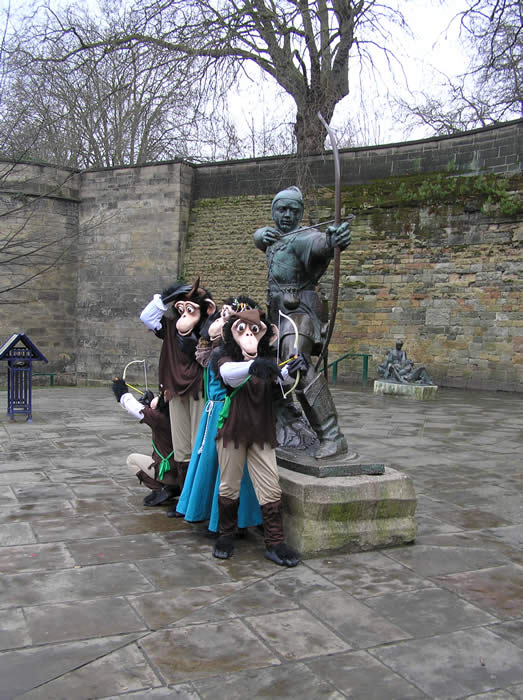 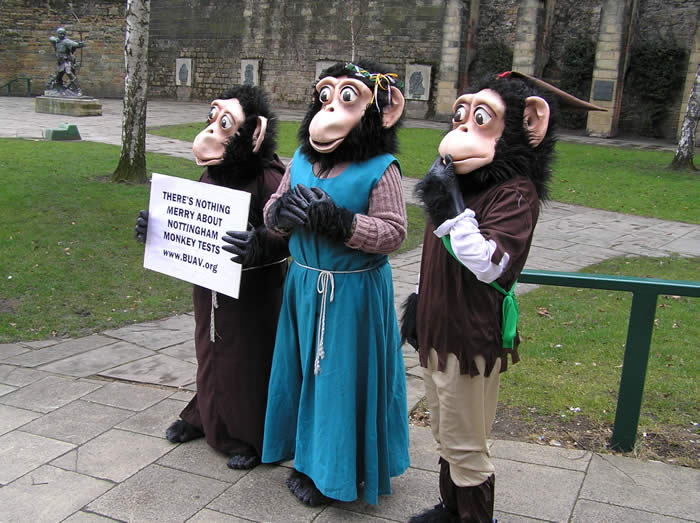 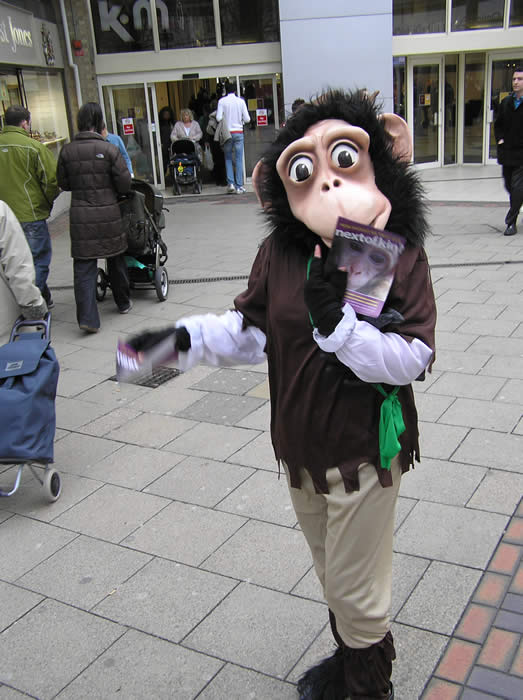 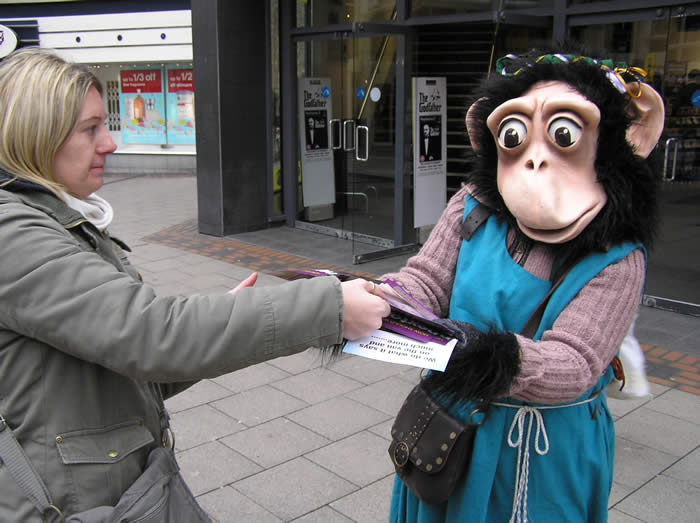 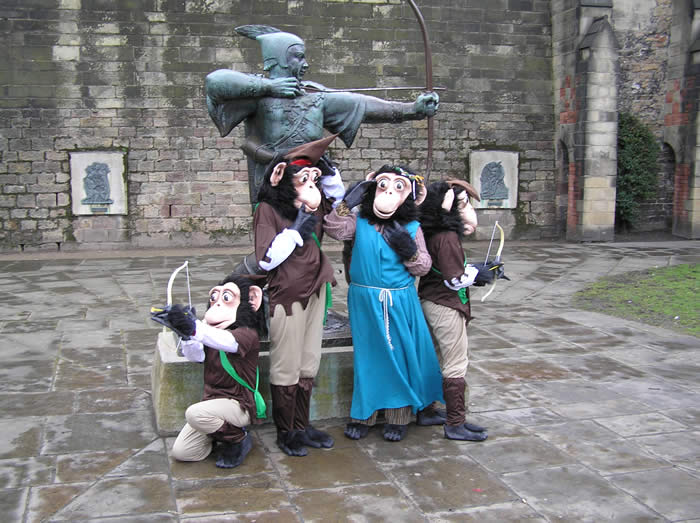 On Thursday 18th March, a troop of Robin Hood and Maid Marian monkeys , were monkeying around the Nottingham Castle and Broadmarsh Shopping Centre, to draw the public’s attention to the plight of primates in laboratories, in Nottingham and other cities throughout the UK and EU. The stunt is part of a campaign which calls for a ban on primate testing.

Monkeys are used at the University of Nottingham and experiments using primates continue to this day throughout the country, which the BUAV (British Union or the Abolition of Vivisection) believe are ethically unjustifiable and scientifically flawed.

Next of Kin, organised by the BUAV, was launched at the start of August with a petition of 163,000 signatures calling for a total ban on primate testing in the UK handed to 10 Downing Street. It has the support of celebrities Heather Small, Alexei Sayle, sports presenter Helen Chamberlain, actress Jenny Seagrove, and world famous primatologist Jane Goodall.

At the last official count, over 3,000 non-human primates were used in the UK (a rise of 20% on the previous year) with the UK one of the largest users in Europe2. All those procedures are liable to have caused “pain, suffering, distress or lasting harm” and are against the wishes of the general public3. Alternatives are available though, and, contrary to what those in favour of animal testing would lead the public to believe, less than 20% of primate use in laboratories is for medical research, 70% being for the profit of pharmaceutical companies. Ethical concerns and scientific doubts mean neither is justifiable.

After decades, scientists have failed to make significant breakthroughs in treating HIV or AIDS, Parkinson's, Alzheimer's disease, or cancer - all human conditions which have been thoroughly, though pointlessly, explored through research on primates An over-reliance on animal experiments has actually hindered medical progress in many areas.

“What good does it do you to test something in a monkey? You find five or six years from now that it works in the monkeys, anfd then you test it in humans and realise that humans behave totally differently from monkeys, so you’ve wasted fiver years.” Dr Mark Feinberg, leading AIDS researcher

“…the testing of vaccines and drugs in more animals will not be helpful if in the end these animals do not closely resemble humans. Even a vaccine that has 100% efficacy in [non-human primates]… might still be ineffective in humans. Conversely, a proficient vaccine developed in humans might never show benefit in the animal models.” Nath BM et al at the University of Pennsylvania:

Nice demo, but why aren't they at Oxford at this crucial time? Instead they direct the media towards a different lab story. To be honest, I suspect groups like BUAV are controlled by the state just like the Stop the War Coalition. They know there will be opposition so they give people an outlet for it and then make sure that it does very little. The BUAV have more money than any anti-vivisection group yet they do little with it and never support grass roots campaigns like Shac or Speak

To get involved in a real movement for change. Contact Speak or Shac.

So we shouldn't bother protesting elsewhere then?

You are talking a load of bollocks. Yes, the main protest does happen to be at Oxford Uni, yes, it's important it's supported, but there are still animal rights abuses in the name of "medical research" occuring elsewhere, and these need to be highlighted, and the case of the six people who are crtical in hospital after having been given 1/500th of the dose used in animal tests of an exprimetal drug in human tests highligh how animal testing just doesn't work (although many sick people will say it serves them right for supporting Big Pharma). And as for BUAV being run by the state, that must be among the most ludicrious, paranoid bullshit I have ever read on here! It certainly the sort of thing that puts me off going to any protest of any kind.

A R Campaigning - any time any place

Were you in Oxford on Thursday?
Perhaps you were, and every other day of your life?

If not, why were you not helping Shac or Speak by raising awareness of the issues behind their valuable campaigns by spreading the word on the streets of Nottm?

This wasn't taking support away from any other campaign, and quite frankly the only way to get rid of vivisection is to raise awareness of what a supremely crappy idea it is. Oh yeah, and the SPEAK and SHAC organisers have been driving forces behind the last two animal rights gatherings, which are set up as an aid to campaigning on ALL animal rights issues. Any time i've spoken to any of them, they've been appreciative that others are taking on other campaigns - general vivisection, fur, circuses, meat, whatever - even though they themselves don't have time to. And if they said any different i'd lose a fair bit of respect for them.

The Nottm event may have been arranged by BUAV to highlight the use of primates in 'research', but (a) many people seeing the stunt would not know of, or be fixated by, the distinction between BUAV, SPEAK or SHAC and (b) BUAV would not have minded supporters using the opportunity to raise support for the trip from Nottm to the Speak demo in Oxford on Sat 25th March (see

btw
there is a 50-seater coach to be filled from Nottm for the World Day for Lab Animals SPEAK Rally in Oxford on 22nd April.
Can we assume, Sarah, that you will take responsibility for all the seats that would go unfilled if we spent all our time _IN_ Oxford, instead of (also) working in Nottm to get more people _TO_ Oxford.

The use of primates in experiments at Cambridge University is controversial, first coming to widespread public attention in the UK following undercover investigations lasting ten months in 1998 by the British Union for the Abolition of Vivisection (BUAV), the results of which were published in 2002.

The investigation showed that marmosets were having parts of their brains sucked or cut out for three research programs. Some of the research was theoretical, aimed at advancing knowledge of the brain, while some of it was applied research, where researchers sought to develop animal models of human illnesses such as Parkinson's disease.

BUAV's investigation revealed incidents regarded by BUAV as examples of animal abuse, which BUAV said indicates that animals are inadequately protected by the Animals (Scientific Procedures) Act 1986. After a review by the government's Chief Inspector of Animals dismissed many of the allegations, BUAV applied to the High Court for judicial review. One of the issues the court will be asked to examine are the rules and guidance on restricting food and water for laboratory animals in order to make them comply with tests. A decision is expected in the summer of 2006.

I disagree with your stance on animal testing

But at least your protest is non-violent and kinda fun.

I agree with you Sarah,the BUAV are an ancient phoney debacle,they have had over the past 100 years of their greedy existence,tons of money,they deliberatly run ineffective campaigns and stupid spectacles like dressing up as monkeys(what does that achieve) making anti vivisection campaigners look juvenile and comedic.

The British anti vivisection association website,has interesting articles on the BUAV and other fake welfarist organizations like IFAW,RSPCA,NAVS.

Sarah has a point

Perhaps it's because they know full well that these organisations are fronts pieces for intimidation and terrorist activity?

also, Greg Avery must be about the fattest vegan in the world

Greg fat? Please post a picture of yourself Shaquila? I think it is you that has been eating all the pies, don't you? Admit it?

Shaquila, what is your point?

Shaquila, what exactly is your point? I have looked at your postings and all I can discern is someone passing the time with verbal abuse and bitchy remarks made at people using this forum. I would be interested to know which side of the debate you stand, although from the very mature title of your e mail address, I seriously wonder if you have anything intelligent to contribute.

But, eternal optimist as I am, I'd like to see something well written for a change from you. Let's see what you have to say, and although I admire your attempts at humour I would strongly advise you not to go into comedy, unless the audience are those poor monkeys in that lab in Oxford who've had their brains removed. .

Infiltration of the AV movement

Some comments have been raised regarding the sincerity, or otherwise, of the BUAV.

I would suggest that the evidence available is clear. The BAVA has for years been trying to alert people as to the reality of infiltration within the AV movement, but few seem to want to hear: result? Vivisection continues with virtually no meaningful opposition. For those who can be bothered to find out the facts please see:

BUAV: Lest we Forget:

Also, and most importantly, the two CIVIS Bulletins and Foundation Reports (a lot to read I know, but understanding the past is vital to understanding where we are now) starting at:

See the BAVA site also for lots of other info on the BBC, vaccination, the Cancer Business, the deception of 'alternatives', etc etc etc. Please circulate this info after. Thanks, Chris