Green Party Principal Speaker, Keith Taylor is to give a talk about Nuclear and Renewable Energy at Angel Row Library in Nottingham on Thursday 6th April, 2006. 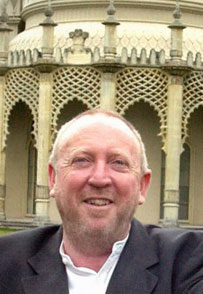 Keith Taylor - A Principal Speaker for the non-heirarchical Green Party

Green Party Principal Speaker Keith Taylor will be in Nottingham on Thursday 6th April as part of a national tour, Dirty, Dangerous and Expensive.

He will be speaking in the Cecil Roberts Room, at Nottingham Central Library at 7:30pm about nuclear power and its alternatives.

Cllr Keith Taylor became one of the Green Party's Principal Speakers in August 2004. He was the general election candidate for Brighton Pavilion in 2005, achieving 22 per cent - the Green Party's highest-ever vote in a
Westminster election. He is a former local businessman who took to community activism opposing an inappropriate local development before joining the Green Party and becoming a councillor.

Speaking in advance of the meeting he said: "I am here to examine the case for renewable energy in the context of the government's enthusiasm for building a new programme of nuclear power stations. In the midst of the government's Energy Review to update its Energy White Paper 2003, with UK
energy prices having just risen by nearly 25 per cent in one leap, the need for wide debate on our energy futures is more urgent than ever.

"Tackling the threat to our future posed by climate change could, with the right political will, courage and imagination, be turned into an opportunity. We could, with a combination of a low-carbon innovation strategies and an aggressive expansion of energy efficiency, energy reduction and renewables, make the UK a leader in low-carbon technologies, with the resultant employment and regeneration pay-offs."

Keith will look behind the nuclear industry's claims to justify the need for nuclear, notably around its carbon performance, and demonstrate how our demand for energy can be reduced and how renewable energy can be developed to fill the gaps left by nuclear and replace the dirtiest fossil
fuel-burning generators.

He will attempt to set into context the choices that have to be made, where nuclear power generation carries with it:

enormous expense
. the creation of further radioactive waste, when there is no agreed,acceptable and effective method of disposal
. the increased risk from terrorism
. the increased risk of accident or leakages in transit of nuclear materials
. the creation of more raw materials which could be used in weaponry
. the health impacts of power stations on their communities

Keith added: "Recognising the enormous objections to proceeding down the nuclear route, I'll talk about how we can live smarter, low carbon lives which are as fulfilling as we're used to, and how renewable energy works, what its strengths and weaknesses are and finally, how everyone has a part to play in developing a low carbon world.

"I'll be mentioning our Green Energy Works campaign as well as offering practical advice on how to change energy suppliers, where to get info on renewable energy generating equipment/installers etc. I'll be explaining the role that microgeneration can play, how combined heat and power systems can help homes toward energy self sufficiency."