Invitation from Colonel Gill - US base Commander - NSA Menwith Hill

Since the early 80s there has been a demonstration 'Independence FROM America' - this year is no exception.... 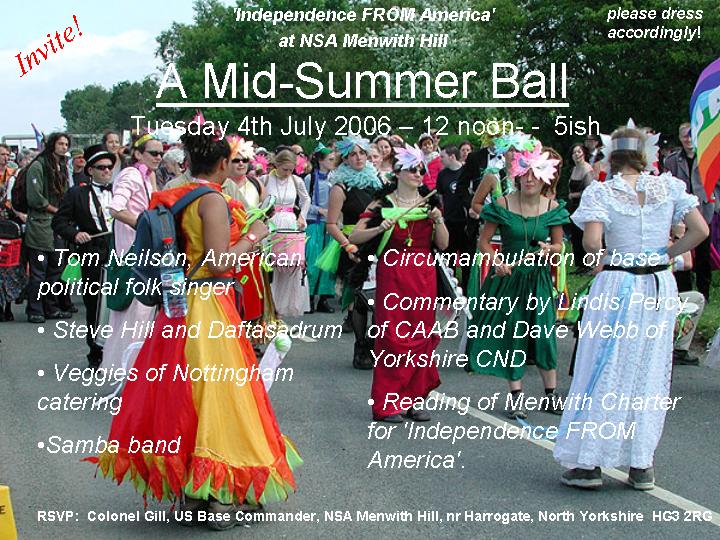 You are cordially invited to the
Annual demonstration
'Independence FROM America'
at the American base at Menwith Hill
on Tuesday 4 July 2006
A chance to dress in your 'glad rags' to attend
A Summer Ball
Tom Neilson - US political folk singer - (coming from the US especially for the demonstration), Steve Hill - Daftasadrum, Samba band, catering by Veggies of Nottingham and much more!

Organised by the Campaign for the Accountability of American Bases (CAAB)
more details on CAAB website soon:

Independence from America Party outside US space communication base Feltwell (near USAF Lakenheath) at 6pm. Peacemakers' Ball, cabaret and fireworks c/o the Pentagon at 10pm (directions: turn left off 1065 onto B1112, past Lakenheath village and the back of base, then look for domes).

Menwith Hill Independence Day - This event seems to get smaller every year. Just as well, because the pen within which the demo is coralled gets smaller every year. Still,at least it is primarily policed by the North Yorks cops who are a lot pleasanter than the city cops who were drafted in when the demonstrations were much bigger
I took my little A4 laminate 9/11 and 7/7 displays. I gave away a whole lot of various 9/11 and 7/7 dvds, even got some money back by way of voluntary donations. Everyone took a twenty deception note.
Everyone was more or less in agreement
Chris from Sheffield Indymedia, was there advertising their 5 Sundays of 911 films. Apparently the first event went off well. My tan is improved.A good day 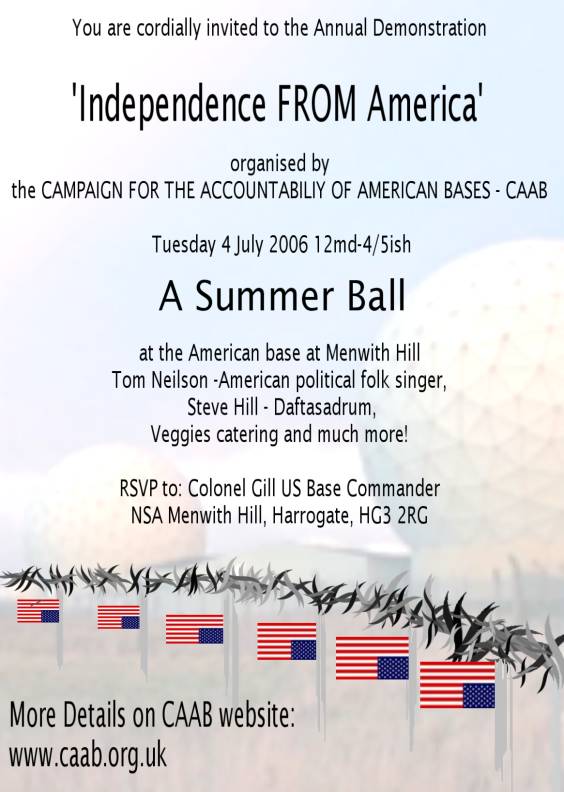 This is the Campaign for the Accountability of American Bases (CAAB) flyer for the protest.