Defeat the Bigots in Nottingham

Christian Voice have been organising protests outside Jerry Springer: The Opera all week. At first we protested on Freedom of Speech. These people are much more dangerous - they are Homophobic Bigots of the worst kind.
Christian Voice is putting themselves across as simple Christians fulfilling the Bible, and standing up for taste and decency.

However, a quick look at their webs(h)ite gives us this quote from Stephen Green, their National Director (Emphasis Mine):

"Of course we make DISCRIMINATORY PRONOUNCEMENTS on the grounds of SEXUAL ORIENTATION. We have been CRITICISING HOMOSEXUAL RIGHTS ever since we started eleven years ago. In fact you could say THERE ARE DOZENS OF SUCH PRONOUNCEMENTS IN MY OWN BOOK "The Sexual Dead End"."

The rest of the site is dedicated to an extreme fundamentalist approach to the Bible that would offend the vast majority of mainstream Christians. Bile against homosexuals, other "sexual deviants", the Human Rights and Race Relations Acts, and demanding a much greater relationship between church and state.

In Nottingham, Christian Voice claim to be standing up for freedom of speech - as long as you are agreeing with them. Otherwise, you have no freedom (and will burn in the eternal fiery pits of hell for all eternity unless you repent). Are these the people we can look to on the grounds of taste and decency?!

SO COME ALOMG AND PROTEST AGAINST THE BIGOTS, AND FOR FREE SPEECH. THIS FRIDAY, 5PM UNTILL 8PM, OUTSIDE THE ROYAL THEATRE. THEY ARE MOBILISING FOR A LARGE TURNOUT - SO SHOULD WE. SWEEP THE BIGOTS OFF OUR STREETS!!!!! BRING BANNERS, PLACARDS, MEGAPHONES, MUSIC, ANYTHING YOU CAN THINK OF - BUT MOST IMPORTANTLY, AS MANY PEOPLE AS POSSIBLE.

The protest will now be from 6.30pm. Sorry, I got messed up with theatre times. :( 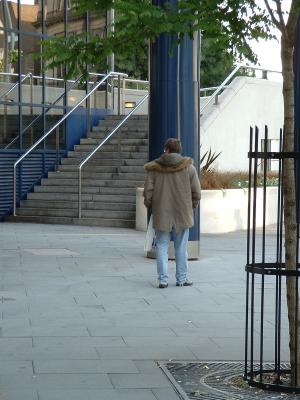 Brian* had forgotten that Friday night was remote-ops night

We arrived an hour early due to the Royal Centre apparently changing the time of the performance but not updating it on their website. No problem - we set up in the pub across the road and had a few pints, looking out of the window and expecting hundreds of Christian Voice protestors to turn up at any minute.

We waited, and waited, and waited, and were just about to call it a night and head out for some more beers, when an elderly couple were spotted handing out the infamous yellow leaflets. We decided it would be rather cruel for a small mob of us armed with placards and a megaphone to take on a couple of pensioners, so we watched them for a few minutes and continued to wait.

Eventually, we decided to set up in the bar right next to the Royal Centre. We found a few tables outside, rested our signs in a prominent position against the railings, and sat there some more. The elderly couple were leaving just as we sat down, so we considered it "job done" and just decided to enjoy a nice evening with some beers.

After a short while, a lone protester turned up and handed out a few leaflets. We felt sorry for him, so invited him to come and sit with us and have a drink. Turns out he wasn't part of Christian Voice, just a local Christian bloke standing up for his religion.

Despite the offer of a pint, he politely refused and had a coke instead. A vegan among our numbers then got off onto an interesting ethical conversation about how swearing doesn't really affects anyone, but how factory farming and eating meat are both cruel and environmentally damaging.

Despite the lack of any real action, we concluded that Christian Voice were perhaps operating remotely, using the power of prayer. Unfortunately, it didn't seem to work, because quite a lot of people went in to see JS:TO, including some who told us that they felt disappointed with the lack of protestors outside, and asked for some of our leaflets anyway.

All in all, the most ridiculous and amusing counter protest ever - we just turned up and sat around drinking beer, with no "ignorant bigots" (Scroogle / Google that) in sight - 100% success!

Thanks to everyone who got involved last week in this wholly bizarre campaign!