Local Doctor Imprisoned Due to Lack Of Funding Into Safe Research

Local cancer researcher driven to nonviolent direct action due to the lack of funding into research that does not involve unsafe & unscientific experiments for greedy corporations who are robbing cancer charities & tax payers of billions & coming up with drugs like Thalidomide with Goverment complicity
Doctor Joe Harris from Nottingham University just got 3years for pumping water into empty buildings. He is a v.inntelligent fun,young man who loves & cares for people & animals. Its shocking he was driven into despair, due to ourgovernments & the EU's greedy corporate research policies that make unsafe,cheap drugs appear safe for human consumption. Its well known that substances safe in one animal can kill another, for example chocolate can kill dogs. Drug companies are harming the public & steal billions from cancer charities.
Cigarette smoke, asbestos, arsenic, benzene, alcohol and glass fibres are all safe to ingest, according to animal studies.
Assualt & far worse crimes get lesser sentences, what sortof world are we being forced into?. He is the first person to be convicted under Serious and Organised Crime Act, supposedly designed for far worse.Paedophiles get less police attention from our new national police force than people facing huntsmen & corporate oafs armed with guns & whips who try to run them over every week,one activist Jill Phips was "killed" by a lorry driver in 1995,recently teenagers have also been seriously ran over protesting illegal hunts.
Greedy corporations try & stop herbalism because they cant easily patent them & make billions.Qualified herbalists use scientific knowledge of their plants studied over thousands of years.Chinese government is bad, but at least they fund herbalism & acupuncture.

Corporate Genetically modified drugs"monoclonal antibodies", like the recent Tegenero scandal in London were tested safe on animals before disfiguring causing test patients to have limbs removed. Thalidomode & countless other drugs tested on animals have caused death or mutations & some antibiotics have already breed resistant super viruses. Alot more people will die "accidently", due to greed unless we have a well funded NHS & a healthier community & planet.

campaigns like that for political activists like Mark Barnsley who was imprisoned after he defended himself and his baby from an attack by drunk students in Sheffield. We got him released early by campaigning at the Crown Prosecution Service & outside prisons were he was held in solitary. Joe embodies everything good about people campaigning against stupid & unjust vivisection, if he wants we can try to set up a campaign to release Joe & expose the corruption & injustice thats happening.

The only thing i don't agree with, is that the cancer research charities, are unknowing victims--they are not.They are funded by drug companies,and at high levels they know what there doing;the drones beneath them don't though.

The best way to stop and expose the vivisectors and vivisection is to expose the fraudulent charities and modern medicine as a whole.

Recommended Reading for the general humanitarian:

Vivisection Or Science: A Choice To Make
Author:Professor Pietro Croce 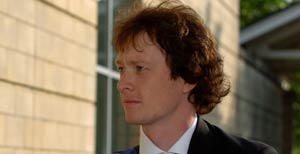 Don't believe all you read in the press, but compare this 3 year sentence for a 'crime' of compassion, which involved nothing more that "glued locks, slashed tyres and hoses through letter boxes" with, for example, the £400 fine with £700 costs for a Countryside Alliance supporter convicted of attacking a hunt saboteur, and reports that "Jail sentences for rapists are to be slashed under controversial new guidelines for judges".

As well as encouraging everyone to write to:
Joseph Harris (TN5728), HMP Woodhill, Tattenhoe Street, Milton Keynes, Bucks MK4 4DA,
it is urged that people supports any upcoming SHAC or SPEAK demos, via the Nottingham Animal Rights group, of which Joe was a past member.

http://lists.riseup.net/www/info/nar where you can subscribe for occasional alerts about Nottingham Animal Rights campaigns.

Animal Rights Prisoner, Joseph Harris was moved on Thursday 9th November 2006, the day before his birthday. This will result in most of his birthday greetings going to the wrong address. More cards and letters of support would be appreciated:

Keep track of his location and support him by supporting the campaigns, at