Leicester Unite Against Fascism are calling a day of action to leaflet Loughborough Shelthorpe Ward against the fascist British National Party this Sunday. The fascist British National Party(BNP) are standing in the election on Thursday 5th October in Loughborough Shelthorpe Ward. Shelthorpe is a largely white working class estate in Loughborough and the BNP have been campaigning on the issue of a recently opened East Midlands regional immigration reporting centre. The seat is a two councillor seat and both seats were won at the last election by the Labour Party. There are fears that a low turnout may provide opportunities for the fascists. The fascist BNP is relying on a low turnout in order to get elected. The vast majority of people in Shelthorpe oppose the fascist BNP and can use their vote to stop the BNP. 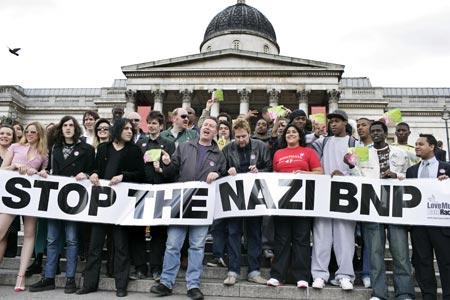 The leafleting highlight what the BNP stand for and urge people to use their vote to stop them. We want to leaflet the whole ward against the fascist British National Party. Help us get as many supporters out as possible. Come along to help leaflet the ward. Urge everyone you know to come out and help, bring family, friends, and any activists you know.
Assemble at 11am on Sunday 1 October outside of the McDonalds on the Ling Road/Shelthorpe Road roundabout for a mass leaflet of the constituency.

Check your history & science nazi,this island & eurasia has always mixed, its what stops our gene pools going stolid like your brain . Poverty is main problem for working class who are kept divided by drugs being pumped into innercities & estates by corporate elite using corrupt government agents, this also adds vital trillions to their stock market. Ex LAPD narcotics officer Mike Ruppert has exposed it with proof,as have many before him, www.copvscia,com.

Corrupt corporate fascists like bush's fund twisted nazis like adolf one ball, elites have done this time & again throughout history. Divide & rule is the bankers tactic when desperate & they turn to fascists or other extremists when they feel threatened.
Right now their destroying this amazing country & every other to try & keep us down & investing in technologies like nanotech that could kill us all because they want to keep power.

In 1934 the Morgan bank, then the biggest in the USA even tried a military fascist coup, this was stopped by those in military who believed in rights of the man, check wikipedia for information General Smedley Butler who uncovered the plot & spent his retirement denouncing bankers & oil companies, check wikipedia.

So how did it go?

So how did it go? It would be great if you could post a report.

The cause of anti fascism isn't helped by the illiterate paranoid ramblings of 'Maknovista'.

It's precisely this sort of shite which makes the opponents of fascism look just as cranky as those who we seek to expose. Not very clever.

sorry- a completely disaterous result which will have fash tails up from her to the may 2007 elections. this election featured 4 seperate antifascist leaflets going out- to what impact?

wasnt there a soltary socialist in loughborough to give a working-class alternative to them?

leafleting - did it have an effect?

Unfortunately, there is no way of knowing exactly how much of an effect our leafleting had. The Socialist Party in Leicester, together with our supporters on the estate leafletted the whole ward. Unite against Fascism also put out a leaflet.

As I went round, the one thing which stood out was the complete lack of posters for any of the parties - 4 window posters up for Labour and 1 up for the BNP were all that we spotted.

The only thing I would add is that, if it wasn't for us leafleting, the result could well have been a lot worse. At least Labour defended their seat. Yes, I agree, we need to put across a working-class alternative to the Nazi BNP -the best way to do that effectively is for people on the estate themselves to get organised, hold meetings and build that local alternative.

Thanks man. I nearly cried with laughter when I read that.

Workers party ? It would be a miracle if any of you middle-class tossers did a days work in your sorry little lives.

And by work I don't mean the parasitical public sector sponging you idiots class as jobs.

When the working people in our communities finally get sick of your racist lies they will burn you nazi scum just like Hitler Burned.

And when the flames start to lick your feet and you see the blood of your idiot "Kameraden" on the ground in front of you the last thing you will see before your eyes pop will be the working people of britain, black and white, LAUGHING!

You fooled them in this election but you didnt fool all of them and you wont fool them forever, your days are numbered nazi scum.

BNP is not democracy

I am from Leicster origonally and am horified to heer that the BNP have got support. I am aware that Leicster is a traditional working class and labour area but can the BNP really promote free and democratic societies. Democracy to me is about everybody having a say in thier own destinies in the area’s that they live and promoting freedoms for all here in the UK and elsewere. The BNP will onely ever represent the interestes of an elite and the interests of the culturally niave. Please in the 21st centurty do the people of this county still not know what a free and democratic society is.

To add to this I find it very insulting that I am told that people working in a county not of thier birth should be given less representation than any other. I personally worked in Leicester for many years as an engineer before coming to Leeds to study for a degree. I now find myself in the position were I can choose to work abroad to broaden my horizens and exprience. This I would also consider to be part of a commitment I have to duty to the community, local or global. However the BNP’s veiw would seem to tell me that if I work abroad then I should have to take lower wages, have less rights and very much discourgae my comminment to duty, which I think is desperatly needed at present. I wish us all to be free and not to be constrianed by the narrow thinking that some deserve more that others simply bacause of thier origin of birth.

So if the BNP get support then I will certainly have less skills and work to give to this country and my community. I do not wish to live in such a scarce soicety so fuck the BNP.

Keep it up all those anti facists and tell us all what a better place it would be with out the BNP.

Talk of zealous nationalism or give a voice to a Nazi

Again it would seem that the BNP wishes to voice its extreme views about zealous nationalism and it would seem that they are getting their way not with tactics of helping people with their troubles but demanding that their views should be heard for the sake of free speech. I find it such a shame because there are many things that I would like to listen about but am stopped because a certain group choose to dominate the stage mainly for their own interest. I have said before that freedom is freedom for all. I am no Nazi and do not wish to be pimped into behaviors that do not suit my natural self. What group lost out on that night at Oxford University?