Argentinian film makers including director Andres Ingoglia will visit Nottingham next week as part of the european tour of their film "i". The film is a meditation on the relationship between media and power as it is manifested by the worlds largest all volunteer network of media activists: 'Indymedia'. The feature-length documentary follows the first year of a small collective in Buenos Aires as it struggles amidst assassinations, a collapsing economy, and a whirlwind of political upheaval.

The film will be screened as a one-off in Nottingham at the Sumac Centre on Thursday 12th October, where the film's director will introduce the film and answer questions. Food will be served from 6pm and the film starts at 7.30pm at the Sumac Centre, 245 Gladstone Street, Forest Fields, Nottingham. During its UK tour the film is also screened in London, Brighton, Glasgow and Edinburgh.

Report: Report and Audio from Screening 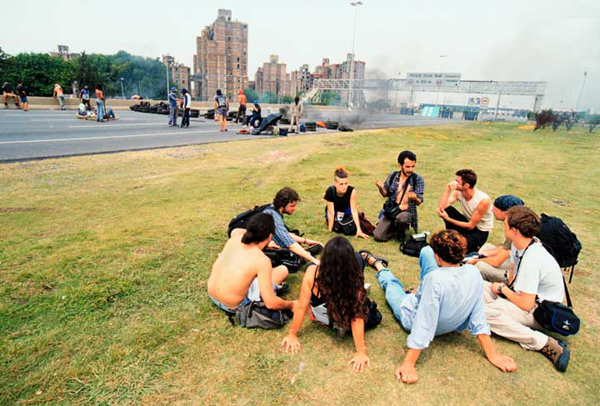 "Beautiful, intellectual, riotous, it fits in no box..."
Naomi Klein, author "No Logo"/ The Take (film)

“i” is a galloping, careening, tornado of a film..."
Chris Anderson- The New York Indypendent

"...With a delicacy, elegance and a vibrancy that is irresistable."
John Jorden author "We Are Everywhere"

“i” is a meditation on the relationship between media and power as it is manifested by the worlds largest all volunteer network of media activists — Indymedia. The feature-length documentary follows the first year of a small collective in Buenos Aires as it struggles amidst assassinations, a collapsing economy, and a whirlwind of political upheaval.

“i”'s non-linear structure mimics the network ideology it documents. The viewer encounters a series of interlocking events, parallel storylines, and related imagery that coalesce around a small group of individuals within Indymedia Argentina — who are themselves linked internally and externally to the forces that surround them. The film progresses through a series of "hyperlinked" excerpts from different media renderings of the upheaval, offering an exploration of the events themselves as well as the story-telling capabilities found in the embedded structure of information on the web.

This structure serves to illuminate the concepts of collective communication, horizontal organization and networked social action. The result is a fractal-like portrait, disclosing a repetition of form and phenomenon regardless of the scale at which it is examined. “i” uses the micro-scale of the individual collective to mirror and frame the macro-scale of the surrounding social movements, theoretical philosophies, organizations, and events.

In editing this film, Lyon and Ingoglia poured through hours of footage from several continents, looking for the resonant moments where these specific connections and intersections unfurled. This delicate process took four years and much meditation — as they sought to portray what at first glance might be a largely invisible phenomenon. What has emerged is not only a document of a particularly notable moment in history, but a profound testimony of the experience of unfolding network consciousness.