Frequent contributer and volunteer of Notts Indymedia Alan Lodge appeared at Nottingham Magistrates Court today. On the 18th March Mr. Lodge was confronted by armed officers running down the street in the area of St. Anns. He started taking pictures. The officers took exception to his presence, and one took it upon himself to physically impede Tash and then arrested him.

Today the case was adjourned as the Crown Prosecution Service (CPS) has so far not given the defence access to the memory card from Mr. Lodge's camera which was confiscated during the incident. Over 50 photos are on the memory card which could show what really took place. The magistrates now ordered the CPS to arrange access to the memory card for the defence. Until now police officers have given contradicting statements of the event. Some say Mr. Lodge was 3 foot away while others say 6 foot. Today 6 police officers attended court to give evidence in the case. Them, Mr. Lodge and all his supporters that turned up (from NUJ members, local, national and independent press to some Notts residents) will have to come back on 5th and 6th March next year when the case will be before the courts again. 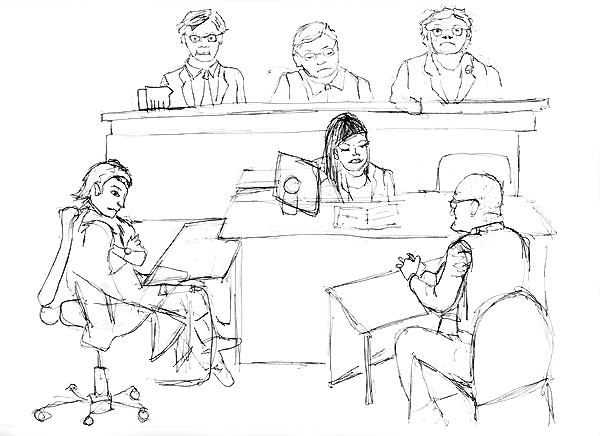 These events occured just a month after Nottinghamshire Chief Constable had agreed a set of "guidelines for police and media at incidents". Lodge says that as these events progressed, police officers simply ignored them. Ironically, Mr Lodge is one of Nottingham’s NUJ committee members who helped initiate the guidelines so authorities are more aware of the media's rights and responsibilities. Earlier, NUJ Nottingham Branch Secretary, Kevin Stanley, said: "Cases like these raise important questions about the right for photographers to carry out their duties in a public place.

We will continue argue vigorously that Alan has done nothing wrong and should not have been arrested." Since the photographers arrest, the NUJ says the code of conduct for police is meaningless if it is ignored by frontline officers."Police guidelines on how to handle the media are no good on paper if officers break them out on the streets," said Jeremy Dear, general secretary." This case has enormous repercussions and is vital for the exercise of press freedom. Alan had a perfect right to photograph in a public place a matter of clear public interest. If the court takes away that right then all of us will suffer as it will have a chilling effect on the exercise of press freedom."