Activists in Nottinghamshire dropped banners off several M1 bridges as part of a co-ordinated banner drop along the length of the M1 to object to plans to widen it. 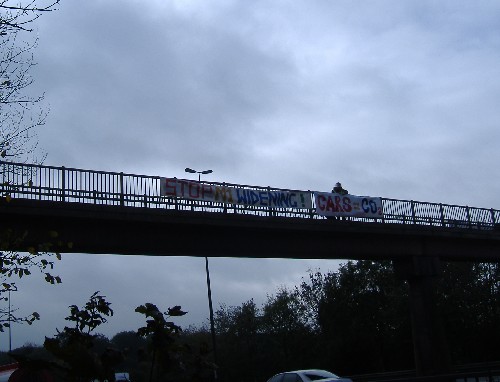 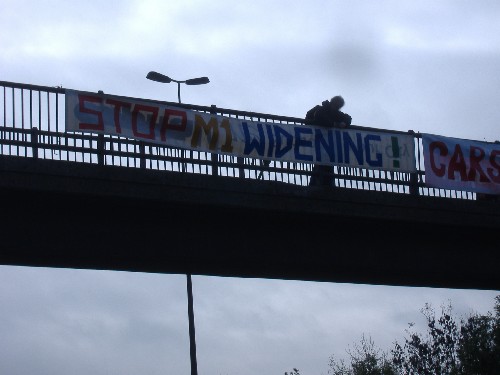 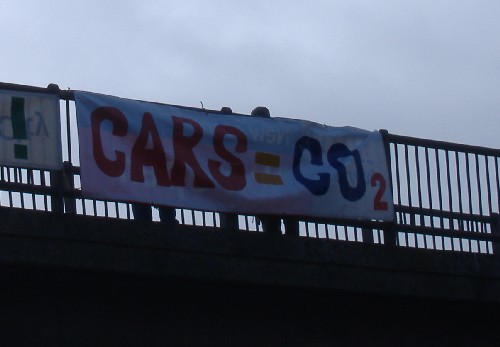 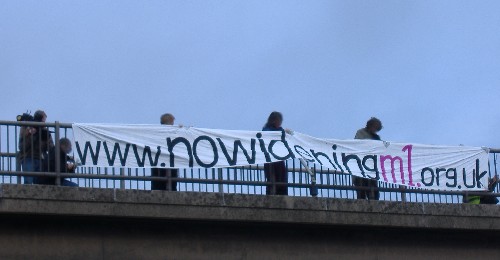 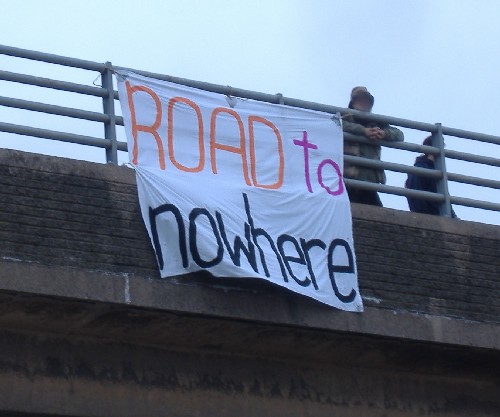 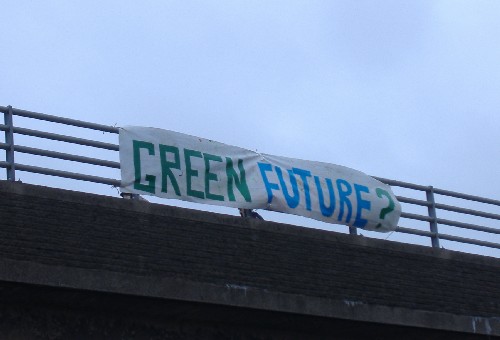 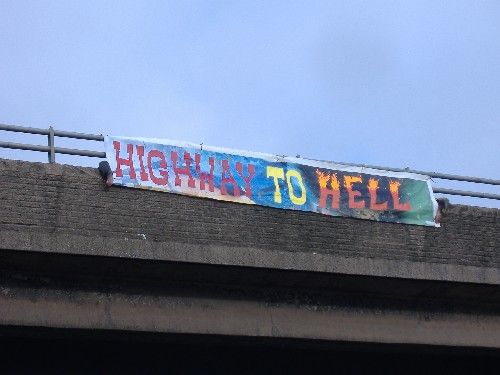 The banner drops were to highlight the hypocracy of the government in claiming to care about climate change and then pushing ahead with this pointless widening of the M1.

Today Monday October 30 from 11 am, an alliance of groups opposing widening of the M1 motorway demonstrated at motorway bridges with banner drops over the M1 from Sheffield to Luton to highlight the disastrous consequences of widening it.[1]

The No Widening M1 Alliance, which includes representatives from communities along the whole route of the M1 due to be widened, are concerned about the environmental damage of widening the motorway, particularly climate change [2]. The banners – up to 15 ft each, with spokespeople, are located at:

l Sheffield (two places - on a foot bridge over M1 at Bolsover; and between Junction 31/ 32, just south of Woodhall service area), banners read “You can't build your way out of congestion” and, “Climate Emergency”;
l Nottingham (two places - between junctions 26/27 on M1, just north of where the B6009 crosses it at Misk Farm, Hucknall where there are two footbridges), banners include “Cars = CO2” and “£3.8bn for what?”;
l Derby, banners read “More roads = More cars”, “No Widening M1”;
l Leicester at 12.30 pm (between junctions 21a/21 on M1, where A47 crosses at Leicester Forest East), banners include “Stop Climate Chaos”;
l Luton (between junction 11/12 where B579 crosses by Chalton);

The Alliance is calling for the £3.74 billion combined cost of the M1 schemes to be invested in measures that will reduce road transport and its contribution to climate change, For instance reducing the speed limit along the M1, road user charging, better investment and improvement to public transport, moving freight onto our railways, increasing the cost of motoring and sensible planning to ensure that people don’t have to travel so far for work and leisure [3]

Julie White, a spokesperson for the No Widening M1 Alliance said:
“Road transport contributes 21 per cent of UK CO2 emissions – which cause global warming, and rises every year as traffic increases. Higher levels of these gases are causing the climate to change at a speed never seen before in human history. The proposed M1 schemes will increase traffic and CO2 emissions, which is contrary to Government policy.”

She continued:
“Road building destroys and degrades habitats, species, and heritage. It divides and fragments communities. It contributes to health problems such as asthma and bronchitis. Road building does little for the poorest in society, who depend on public transport. We also know that road building doesn’t work, you only have to look at the M25 to see that more tarmac is not a solution to congestion.” [4]
ENDS

Media Contacts: Sheffield Julie White 07759 851073; Nottingham Ben Clements 0794 6165672; Leicester Herbert Eppel 07808 967196; Luton Victoria Harvey 07815 817 108
EDITORS NOTES
[1] The Department of Transport has widening planned for the M1 between junctions 21 – 42 (Leicester to Leeds) to 4 lanes in both directions. There is also widening planned for junctions 10 to 13 (Luton to Milton Keynes). The M1 between junctions 6a and 10 (M25 - Luton) is being widened at the moment. The entire widening programme for the M1 amounts to £3.7 billion. During the 2002 East Midlands Multi-Modal Study the M1 section from junction 21-30 was costed at £700 million. It then entered the roads programme at £1.9 billion in 2004. It is expected the M1 widening costs will rise further as rising energy, oil and materials costs are causing massive cost escalation in the entire road programme.

[2] The 2003 Energy White Paper announced that the government would put the UK on a pathway to achieve CO2 emissions reductions of 60% by 2050. However, greenhouse gas emissions from private cars rose from 59.6 million tonnes in 1990 to 67.8 million tonnes in 2003, an increase of 13.8% (source Office of National Statistics Environmental Accounts 2005)

[3] Alternatives to road widening include:
Reducing the speed limit: Studies have suggested that reducing the speed limit to 50mph would reduce the bunching of traffic and thus congestion. It would have the added advantage of reducing fuel use, as cars are far more efficient at this speed. The number of deaths from car crashes might also be reduced.
Road User Charging: As we have seen in London, road user charging with the money raised invested into significantly public transport provision seems to reduce the number of people choosing to drive.
Better public transport: We need cheap and efficient public transport - so people have a genuine choice about how to travel.
Moving freight onto the railways: Financial incentives to encourage freight off roads and onto the rail network exist and are working. These schemes need to be expanded. Buying local products reduces the need to transport goods.
Increasing the cost of driving: In real terms the cost of driving has hardly changed in the last 20 years, while the cost of public transport has gone up three-fold. Driving has costs that are borne by the whole of society i.e. air pollution, climate change, disability from accidents. These costs in fairness should be included in the cost of motoring. Those who drive are more likely to be well-off than those who don't.
Looking at the need to travel: It would be better for our communities if people worked where they lived and shopped locally. Instead people travel longer distances to work than ever before, making the working day and week longer.

[4] Road widening and new roads simply encourage more traffic. The governments own studies confirm this. In the policy document 'In Trust for Tomorrow', released in 1994, Labour spelt out that road building simply generated traffic and the Transport White Paper in 1998 was emphatic about the need to protect environmentally important sites from road construction. When the proposals for the M1 widening were originally agreed, it was noted that the only way to lock in the benefits would be to employ road-user charging. This has not been mentioned in the current documentation.

PICTURE EDITORS NOTES
Demonstrators with banners at bridges on M1 are available at locations indicated at 11 am except at Leicester from 12.30 pm on Monday 30 October. Photographs may be available from the respective media contacts.