Campaign against racism in Lincoln is gaining ground

Over 100 people took part in a demonstration in Lincoln on Saturday (2nd Dec) to voice their anger over the not guilty verdict given recently against Nick Griffin and Mark Collett on charges of inciting racial hatred as well as recent local press reports suggesting that the BNP are intending to stand a number of candidates in next years local council elections. Despite this increase in attention on the BNP the LARF (Lincoln Against Racism and Fascism) campaign is gaining ground with more and more people expressing support, especially young people.

Links: Stop the BNP! | Unite Against Fascism | Lincoln organises against the far right

Articles: Lincoln LARFs at the BNP (photos) | Demo Against the BNP Activities in Lincoln on Saturday 2nd Dec | Lincoln BNP member in court ! 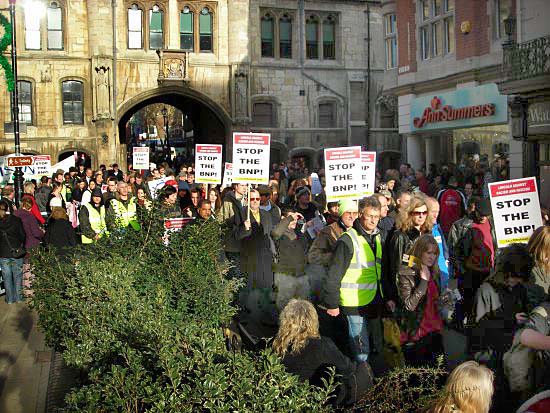 LARF MEMBERSHIP AND THE LINCOLN MARCH.

Firstly, I am not a member of the BNP and I remain certain that the BNP will never gain any governmental status. However, the BNP are clearly gainning in strength dramatically. This is because in general, the normal 'man in the street' general public are sick and tired of immigration. This is not the fault of the Poles, Latvians or whomever, it is the fault of the government. The NHS is falling apart due to fat cat management salaries, falsifying of lists by the NHS and such other corrupt maladministration. The DWP have admitted giving out National Insurance numbers to immigrants without checking to see whether they are here ligitimately or not and the social housing in Lincoln cannot cope. I cannot even get a dentist in Lincoln, the only one I can get is a Spanish dentist in Sleaford who cannot speak English! However, LARF will never have any mainstream support. This is because despite what LARF may deny, the police special branch filmed many extreme radical left wing activists taking part in that parade. In addition, a large percentage were not Lincoln people and therefore, the parade was flawed. In addition, you did not have permission to use the University as a starting point. Like it or not (and you wont) LARF has got members who are anarchists, communists, animal rights actavists, so called eco warriers and far left socialists. Where do you think some of your funding comes from? Wake up!

In conclussion, when you say 'Stop the Nazi BNP' yopu need to remember. If the BNP are Nazis then by the same narrowmindedness you must agree that you are all communists? 6 million people died under Hitler and the Nazis. By their own admission under the communist soviets, 40 million peole died unde communisim. Therefore, if you want credibility, get rid of the looney lefties!

Jonathan Smith - I think a number of your comments are flawed. I was on the march, so I can comment as an observer.

Firstly, although it is true that there were some people from outside Lincoln, they were certainly not in a majority and they stewarded the march; they did not take part in it.

Secondly, your comment that because it was initiated by the Socialist Party and other left groups, this does not mean that it did not gain more mainstream support. Indeed one of the Labour Party councillors who spoke at the rally after the march said that "Lincoln does not tolerate extremism of the right or the left" - hardly comments which would endear him to Socialist Party members. I know of Liberal, Labour and Conservatives who joined in the march - along with someone wearing a giant teddy bear costume who was outside a department store, who held aloft a placard!

We had political arguments with the Labour contigent, who wanted to criticise the BNP, but not the Labour government - the very cause of discontent and political apathy which fuels their support. They often put a left face on their policies but blame everything on immigration and would pursue neo-Nazi policies given the chance. It is people's disillusionment with mainstream parties which gives the BNP support - this is not, I think, genuine support for bigotry, isolationism, homophobia and sexism. Of course the BNP also seek to hide their true agenda.

I am in the Socialist Party and we would like to boast that we had the numbers necessary to take part in the rally in Lincoln. However, this is not the case, and we recognise that we need to argue for a new workers' party to truly represent the working class, within which we can debate the need for socialism, rather than just call for a mass socialist party and it will happen overnight. Join the campaign at www.cnwp.org.uk. In the meantime, we are a small party, but we will pose an alternative to the fascist BNP wherever we can and try to fight them by answering their false arguments politically.

At the moment, we are helping organise a demonstration, in conjunction with trade unions and other anti-fascist groups, against the BNP's "Red, White and Blue Festival" in Codnor, Derbyshire - details on: