Climate activists from around the East Midlands managed to stop some operations at Radcliffe on Soar Power Station after climbing onto conveyor belts and dumper trucks inside the plant yesterday. The power station is located just outside Nottingham and is the 3rd biggest emitter of CO2 emissions in the UK. The owner of the plant, E-On, said operations ran as normal and that their environmental record is good with aiming to be a clean coalfired power station. A spokeswoman for the protesters said: "Putting pressure on individuals to reduce emissions when companies like E.ON are profiting from this polluting industry is obscene and irresponsible. We should not be burning coal in the 21st century."

The blockade lasted for 3 hours and 11 people were arrested all of which were later released. The action was part of 'Spring Into Action' - a week of workshops, entertainment and actions around the issue of Climate Change in Nottingham. 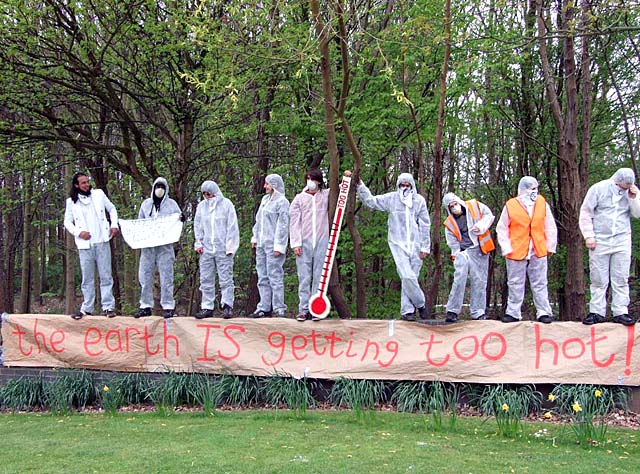 One of the group said "the threat of climate change is so huge and the government so complacent that the people themselves are now acting in proportionate response to this and targeting the root causes of climate change. It's not enough to reduce emissions individually – we need to act together to challenge fossil fuel consumption."

"Putting pressure on individuals to reduce emissions when companies like E.ON are profiting from this polluting industry is obscene and irresponsible. We should not be burning coal in the 21st century."

Updates on the situation

Activists entered the plant at 9:30am.

The police have just arrived.

There's a demonstration going on at the main gate, and apparently quite a bit of mainstream media interest.

Green protesters today illegally entered a power station site and chained themselves to equipment in an attempt to shut it down.

Around a dozen protesters managed to sneak on to the Ratcliffe-on-Soar power station site this morning before chaining themselves to vehicles and other equipment to avoid being moved on by staff.

Notts Police were called to deal with the protesters for trespassing.

The action was organised by city environmental group Eastside Climate Action, which is currently running a week-long series of Nottingham events called 'Spring into Action'.

A spokeswoman for the group said today's power station protest was about taking direct action to raise public awareness about companies it considered Notts' 'climate criminals'.

Power company E.ON, which runs the power station, said its energy generation had not been affected.

Notts Police confirmed officers had been called to the power station to deal with 12 to 15 protesters.

Inspector Glenn Harper, of Notts Police, said: "The site is potentially dangerous to anyone who is unfamiliar with its layout and there are busy roads close by.

"Our main priority is to maintain the health and safety of all those involved; the protesters, staff at the power station and the police officers who attend."

A few more links from the mainstream media

Was also the top story on BBC Radio Nottingham at 12pm - MP3 is attached.

11 people have been arrested and as of Tuesday night they were still in costudy. More info when we know more...

How can burning coal be clean? 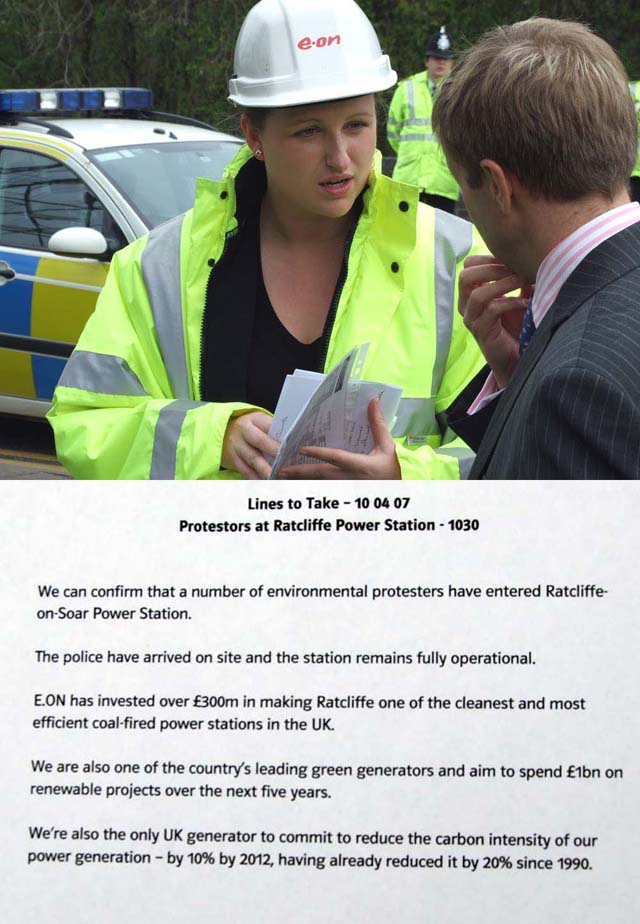 How can burning coal be clean? This is the pressrelease E.ON got out during the action. Do they really think they can be 'clean'?

The activists did not actually shut the plant down... but they came remarkably close: according to workers, if they had held their positions for one or two more hours Eon would have had to start closing the plant.

There must have been a lot of planning gone in to this occupation, and it takes guts to lock on to something like a conveyor belt.

You're a shining example to the rest of us, thank you.

What we locked to

Both of these lock on points meant that no coal was allowed into the main power station operation. The effect that this had accurding to the workers who were with us is that several of the units went off line and the power station was running at a reduced capacity. If we had stayed there for another hour we would have shut down the whole plant.

One of the locked on

Virtual round of applause

Just wanted to say - big up all your bad selves! We need to kick coal into the long grass if we're to stand any chance of doing what needs to be done about climate change. I was just thinking it seemed like there hadn't been much action for a while when POW! F*cking brilliant. See you all at Climate Camp one hopes

As one of the people arrested I cant say too much right now but here is what the workers were telling us.

At 9:45 when we locked on to the conveyer, they said they had less than 6 hours of coal left inside the plant. After 2 hours, production capacity was reduced massively. Generators came offline one by one, due to lack of coal. They had trouble putting the little they had through the machinery and not all of the coal was getting through. After 2 and a half hours we were removed by police. By that point they were 1 hour from initiating the shut down procedure which would have closed the plant for 48 hours. EON said that Ratcliffes production was unaffected The rest of the Grid was not disrupted and no hospitals were shut down.


This action was a completely rational and proportionate response to the threat of climate change.
We dont want to inconvenience the public but these massive sources of emissions must be stopped and we need to find another way if we are to have a hope of saving this planet from catastophe.There are so many better alternatives.

There is no place for coal in the 21st century.The government must stop building carbon intensive infrastructure and it must shut down the old, if not the people will. Personally I am very angered by the fact that those in power are not taking this problem seriously and think that people must start making the changes themselves.

Its simple to stop the planet from dying, we stop burning all fossil fuels NOW.


This action goes out to everyone who loves our earth and dares to dream of a future. Empower yourself to make a change in the best way you can.

Together we can do anything...

Good work on the press coverage

We really managed to get into the mainstream press with this one a lot! There's a commentary in the Nottingham Evening Post again today that - in a roundabout way and despite a few slightly silly lines - ends up being rather positive about us.

Last time there was a power cut

Last time there was a power cut it was quite good. I got to talk to my neighbours for the first time. They stopped watching television for once. Cut the power.

Big up the Eastside posse!

Just wanted to say a massive YEEEEEAAAHHhh!!! to everyone involved with this action! Despite the spokesperson from the factory saying that we didn't stop operations, we all know we fucked their day up pretty well and stopped alot of coal from getting through.. Big up the Eastside posse! (since that seems to be what they've decided to call us...)
It seems the time has come that we start taking our future in our own hands.. Even though slowing operations of one coal plant in the middle of Nottinghamshire may seem like a drop in the ocean compared to the massive task ahead of us, we cannot continue to let our voices go unheard, and actions like this provide a platform for us to bring some sense into the mainstream media for a day, and show them just how serious and urgent we all know this issue really is. For me the highpoint of this action was that we weren't only inside the factory stopping the machinery.. we were outside the gates talking to the press, we were all over the radio and television speaking eloquently and seriously for the cause, and then, as the cameras went to the factory, we were holding a week of climate inspired workshops, showing working examples of grey water systems and bicycle powered lights, proving that we weren't only focusing on fighting against the polluters, but also working on creating positive solutions towards a sustainable future. Yeah. :)
Hopefully be seeing you all for more creative mischief making in the near future. x

One of the people in trouble...