Two women representatives from the Six Nations on the Grand River community in Ontario, Canada toured England, Ireland and Scotland at the end of June to give talks about taking back a piece of stolen Indigenous land from development and struggling for Indigenous Sovereignty. One of the woman was a representative from the site of an ongoing (since February 2006) land reclamation and the other an Oneida Nation Clan mother- a representative from the traditional government. They spoke about the experience of reclaiming and defending a piece of land from development. Their action has been incredibly successful, having prevented the development and protected the land from an armed police incursion. The talk was very moving and incredibly inspiring. 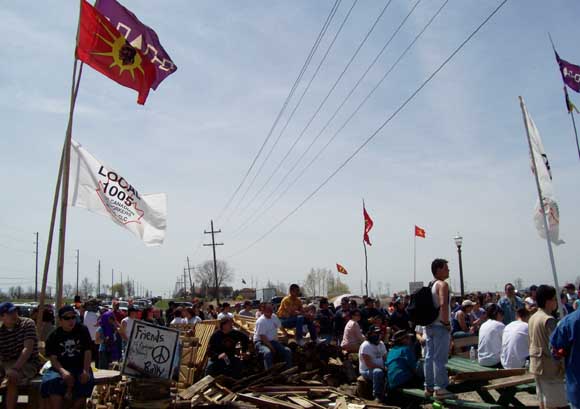 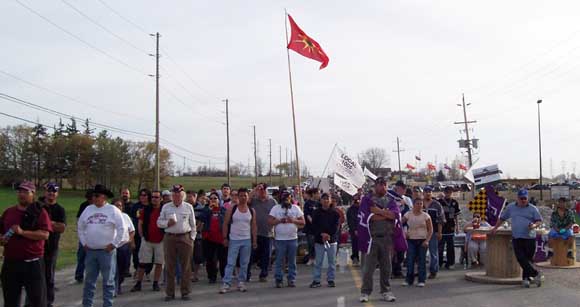 They also spoke about defending their community against colonisation and the struggle for Indigenous sovereignty. The Haudenosaunee have been living as a Confederacy of nations organised by direct consensual democracy since 1142, although there have been systematic attempts by the colonial state to obliterate them as self-governed sovereign people.

Six Nations of the Grand River (a Haudenosaunee reserve in Ontario, Canada) reclaimed forty acres of land on the 28th of February 2006 that had been sold by the Canadian government to a housing development company. The land is part of the Haldimand Tract (1784) granted by the British in return for some of the Haudenosaunee fighting against the soon to be United States, and thereby losing their lands. Led by the Clan Mothers, (their traditional female leadership) they set up camp on the burial ground and stopped the bulldozers’ work. A year later the land reclamation still stands and the Six Nations community is asserting their sovereignty; not only by taking back land that was sold by the government without title to do so, but by practising their right to govern themselves and their community.

The land reclamation has survived due to a tremendous show of solidarity by a large part of the 20,000 strong Grand River indigenous community. 150-armed police were walked back off the site when hundreds of people arrived in response to the dawn raid, indignant that the police had arrested and beaten the handful of people who were sleeping there. Blockades and barricades were erected that protected the reclamation land from further attack and also were a powerful tool in forcing the Canadian government to take the reclamation seriously. In June 2006 the government bought the land back from Henco, the developer. The site has also weathered many ongoing right wing demonstrations that play on local, non – native peoples’ fears and racism.

The success of the reclamation at Kanonhstaton (the protected place) encourages indigenous sovereignty struggles across Canada and the United States. The Haudenosaunee are reasserting their traditional ways, which include their surviving system of direct, consensus based democracy (dating from 1142). Marx’s vision of a classless society was based on a early anthropology essay describing Haudenosaunee governance. Women take an equal and leading role in the traditional government. On New Years Day the Clan Mothers and Confederacy Council reoccupied the traditional government meeting house for the first time since its forced closure in 1924, when the Band council system was imposed on the reserve. The colonial attack on Indigenous people has meant systematic attempts to wipe out their languages, government and identity as distinct peoples, as well as taking their land base. However, these things, though not undamaged still survive. Near and far to Six Nations Onkwehonweh (original people) are taking action to halt development, mining, and environmental destruction on their land.


Please show support by coming to the talk if you can.

It's a tat short notice, but if anyone can print and display a poster today, it'd be a great help.

You'll find them at