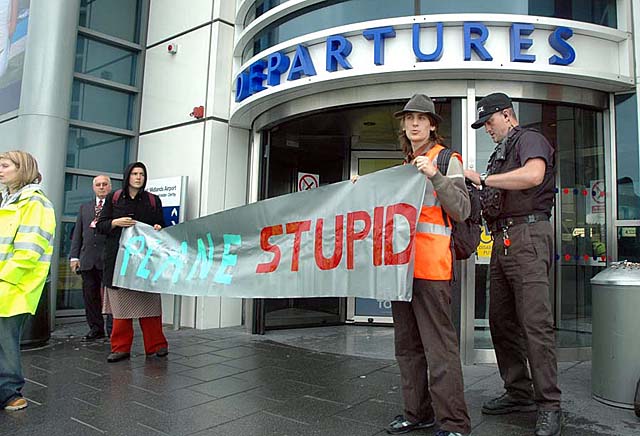 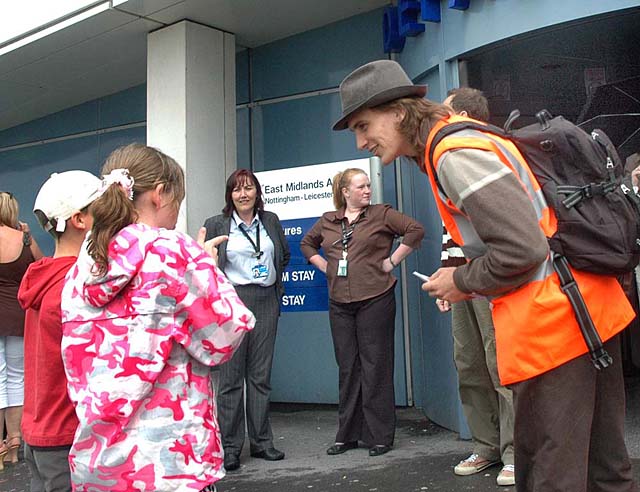 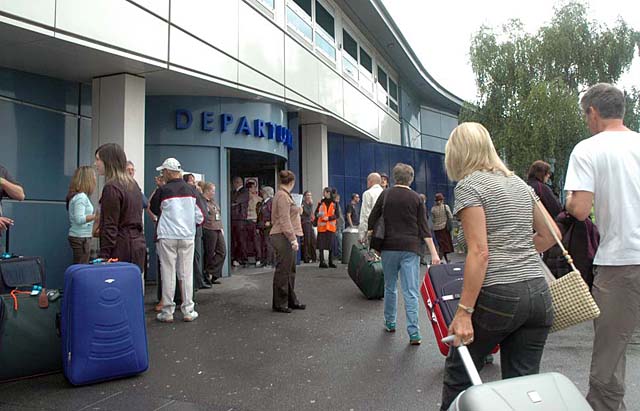 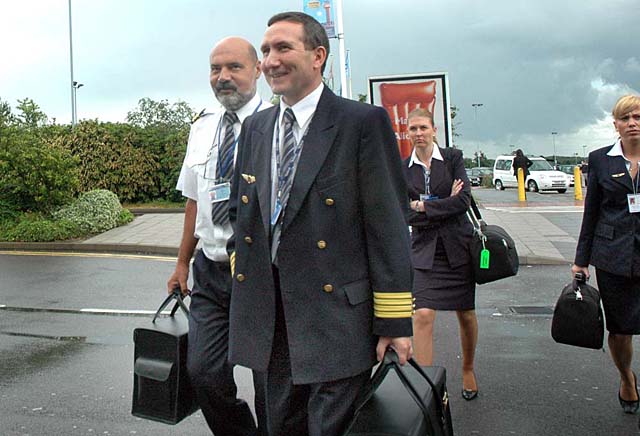 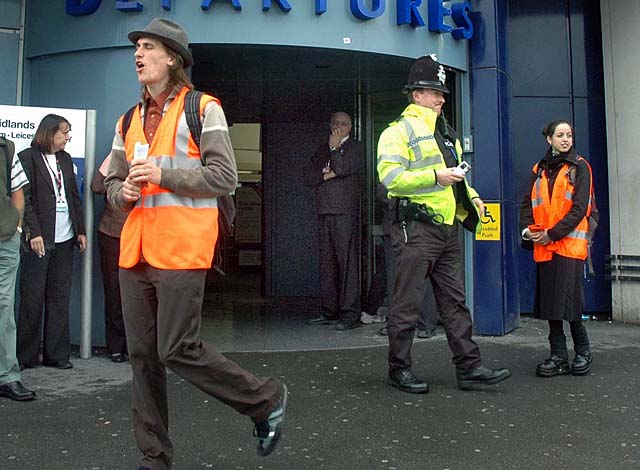 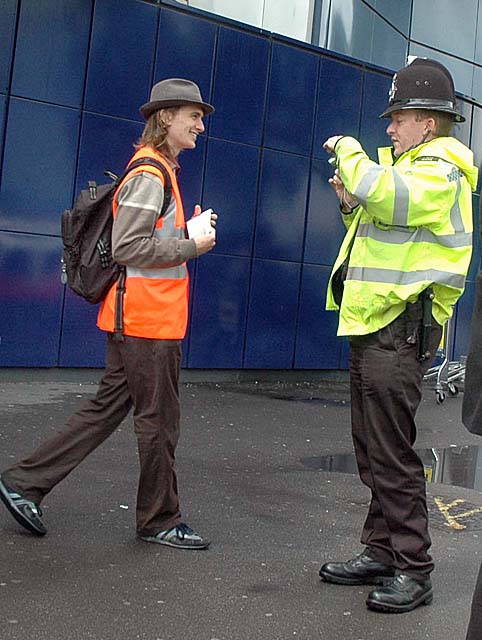 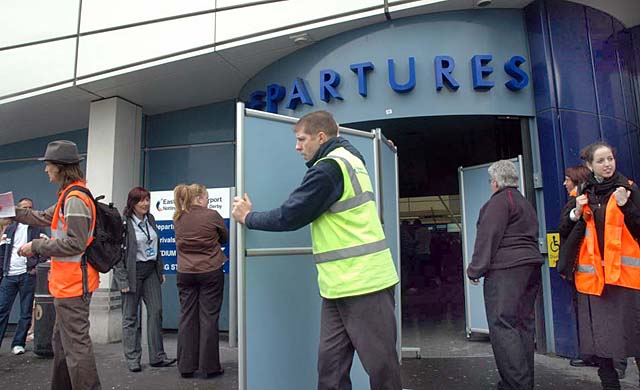 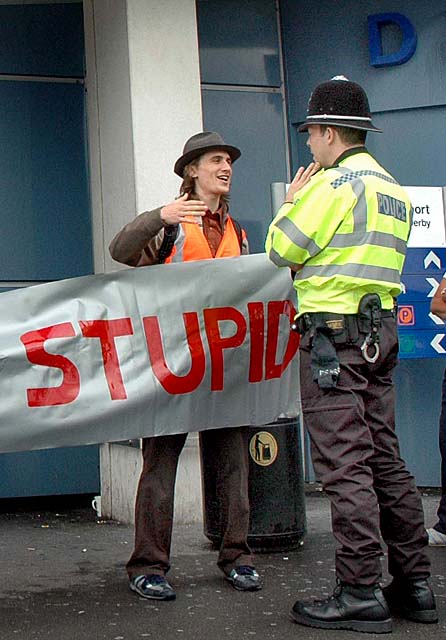 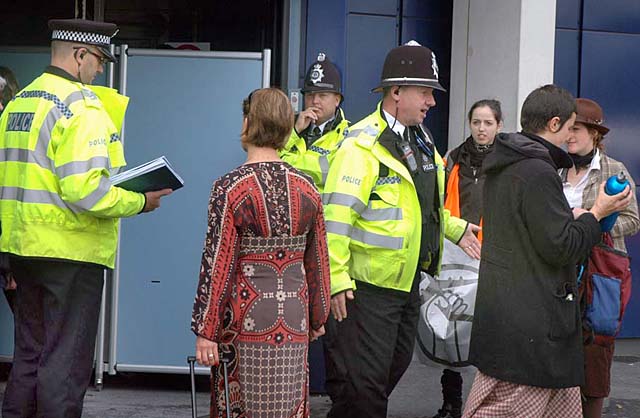 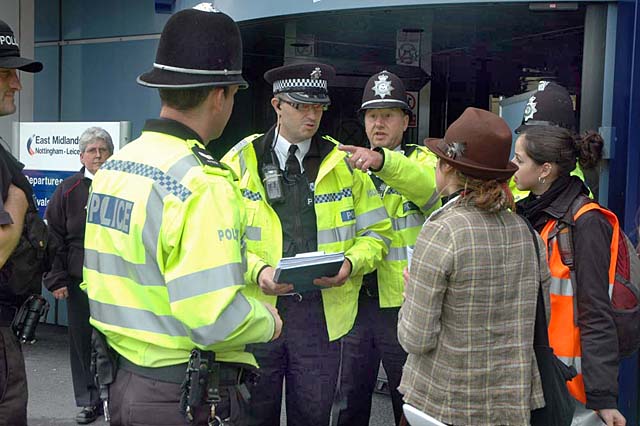 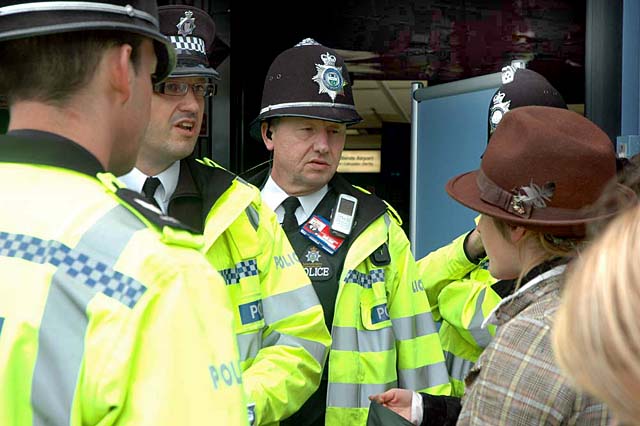 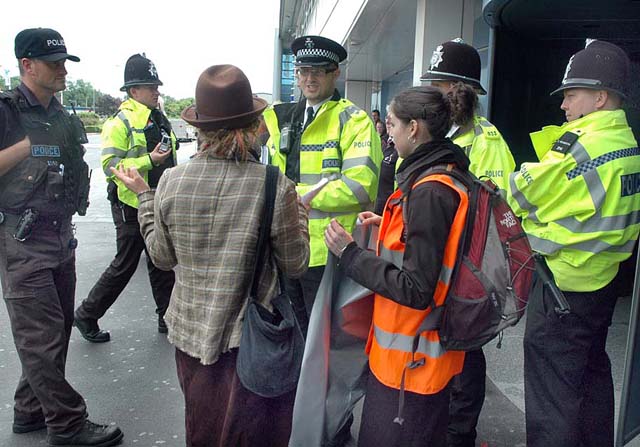 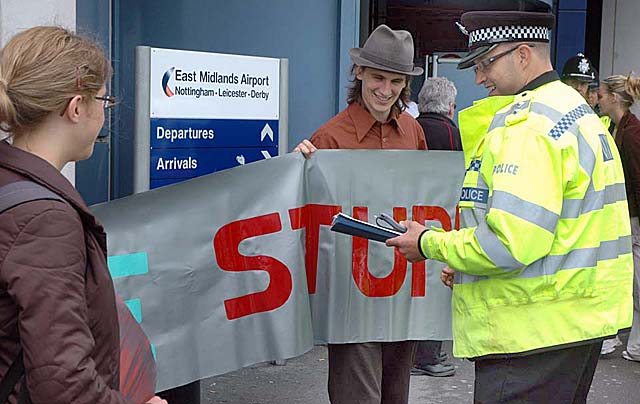 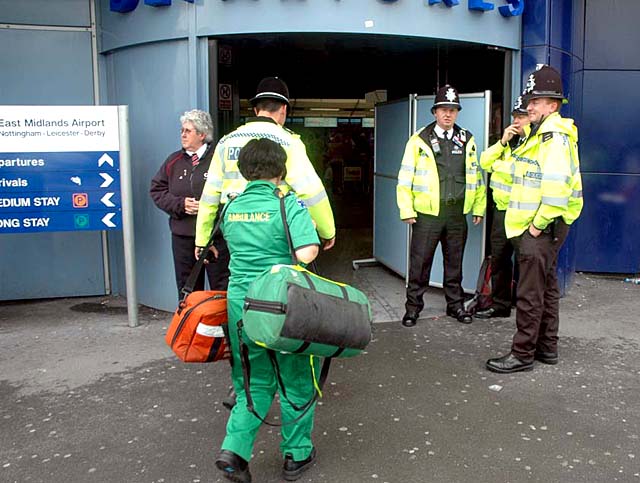 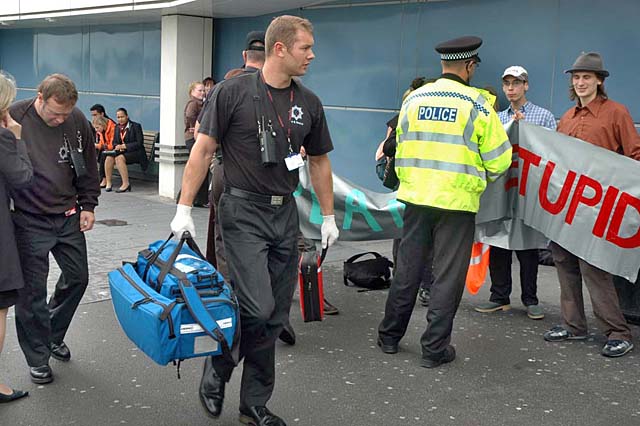 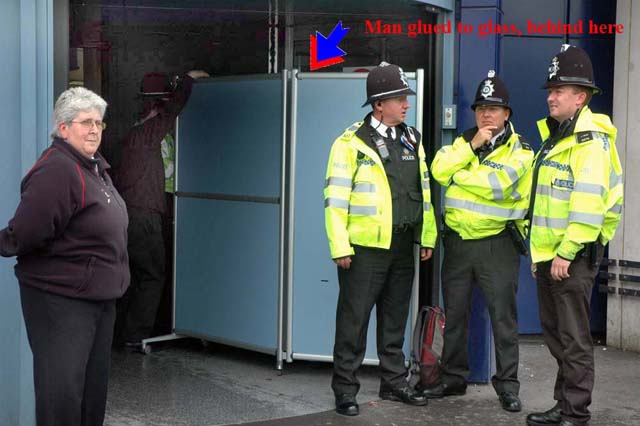 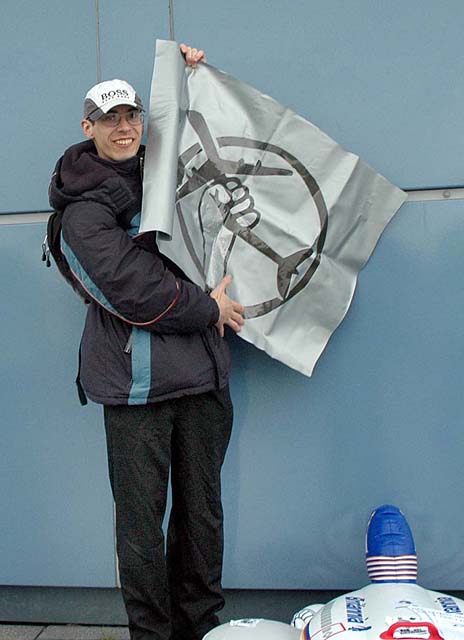 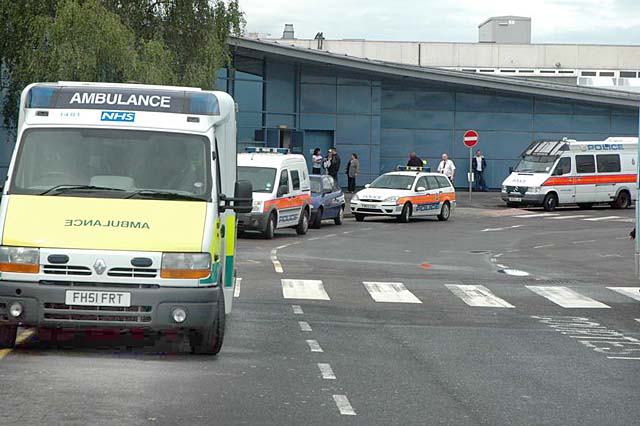 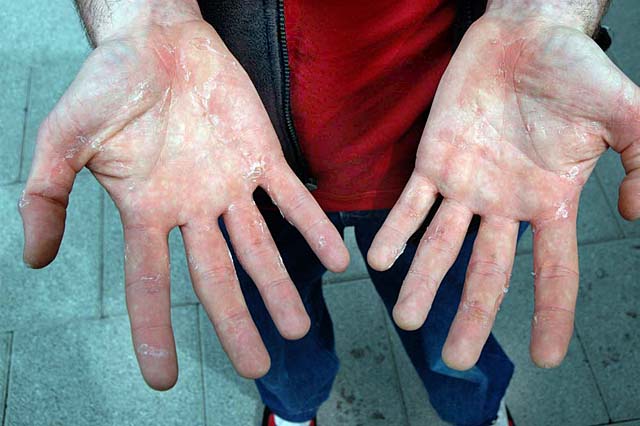 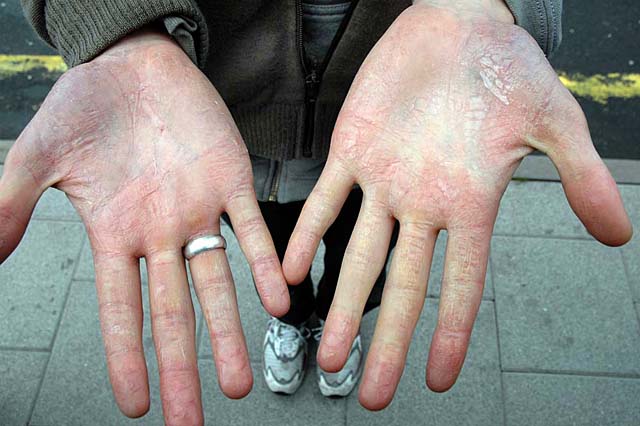 I would be interseted in seeing the leaflet handed out at this action, can someone post it please? 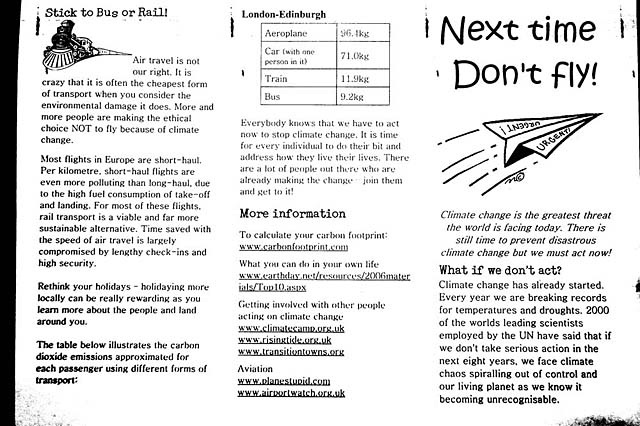 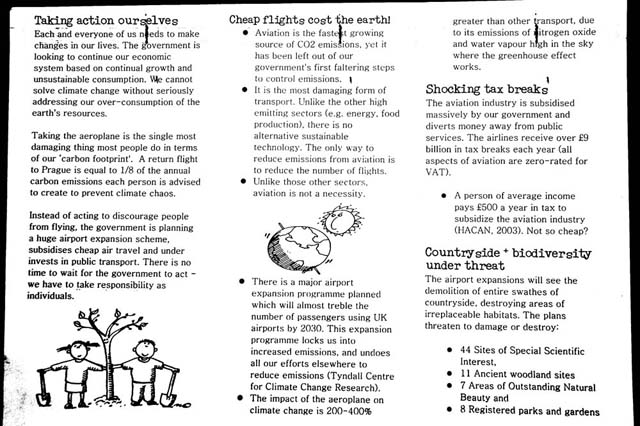 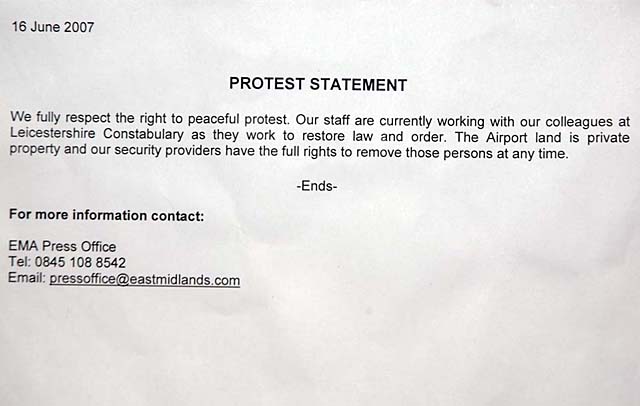 Yep, I was just about to add it!

Mine got a bit damp though, stood there in the rain.

Compare and contrast:
The leaflet, handed out to passengers, passers-by, airport staff, policemen etc, contained the case for action. It was well put together with facts, figures and references on why people were concerned about the factors affecting climate change. Although concise, I thought it got across the practical and moral case.

I asked the East Midland Airport communications person for a press release about half way through yesterdays events. I was told one would be prepared. About an hour later, she gave me these three lines of text!

As you see,
1. they respect the right of peaceful protest.
2. they cooperate with the police to remove such protest.
3. absolutely no mention of the issues folks were there to draw attention to. 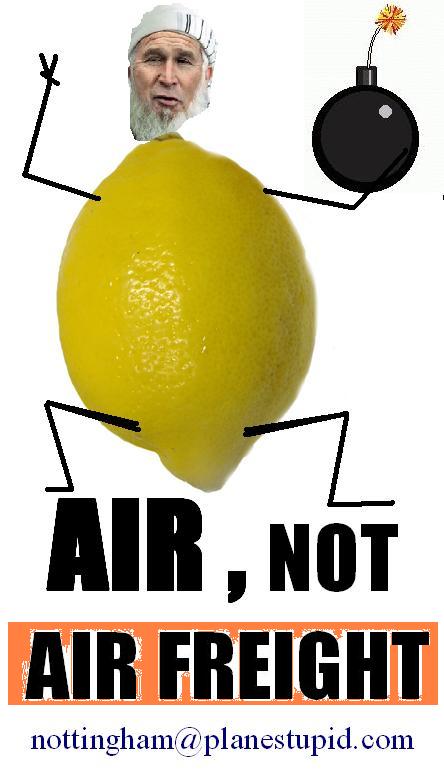 Yes, the action successfully reached a lot of people and left a lasting imact on the Departures area and Pegasus business park. Note that the accusations that we were blocking fire exits were inaccurate. If we really wanted to threaten security we would have gone to the opening in the far right hand corner of the hall.

Musicians please get writing those protest songs. I have started a "Make CDs not CO2" facebook group but don't feel very confident with MySpace so someone else can do that. My new hip-hop offering is on my website,

Thanks to the airport for having us. It's so handy! I hope to visit again with an offset project, involving Plane Stupid branded condoms. P.S. That lady who commutes to spain was so cool!

Make CDs NOT CO2 - my new project to make this sort of action more entertaining.

We've got to learn
What nature can manage.
It's not to late
To save the planet!
We've got twenty years, my dears,
To acclimatise, if we're wise,
We've got to change our lives,
Not the climate.


because I can't string a sentence together verbally here are some slogans:

This is utterly stupid. There is no wider analysis on why people choose cheap flights, why people want to go abroad for holidays, the reasoning why people take planes. If you can look beyond your own middleclass green morality you'll see that working class people can not economically afford to go via train, boat, and coach to somewhere like spain or greece. Also the time it takes will make most of the holiday getting there. To say that people should instead stay at home borders on the parochial nature of many of the activist involved in such campaigns.

If we are going to stop climate change it won't happen with actions like these, it will be about building a social movement which targets the basis for mass and uncontrollable carbon emissions produced by inefficient and unnecessary over production due to the capitalist market economy. We should also target the amount of short haul business flights which make up a large percentage of short haul flights in Europe.

The answer is not Not to fly, it is not to go on holiday locally, it is to support, encourage, expand the development of a social movement which challenges the essence of this death march to ecological collapse.

The people that FLY are the RICH! The POOR will FRY!

To answer the critcicism of the previous comment. Plane Stupid activists are heavily involved with building a social movement that criticises and seeks to build and alternative to the system that is leading us to ecological meltdown.

The reality is that it is the rich that fly and are flying more in 2007 whilst the poor are flying less than they were in 2000. The average household income for a user of the budget airport Stanstead is £47,000. The rich are buying second homes in place where locals can't afford to buy first ones and then flying over there 6 times a year. Only 7% of all flights are taken by those earning under £15,000 a year. This number is decreasing.

The reason that aviation is the less expensive option is that the aviation industry pays no tax on fuel compared with at least 60% or 70% tax on land based fuels. Furthermore the aviation industry pays no VAT on aircraft and is allowed to sell duty free to subsidise its costs. Restricting flying is a socially progressive policy that targets the overconsumption of the rich which is leading us to ecological disaster.

The marks on the hands are glue, not skin. The hands quickly return to normal.

..... made by stupid plane stupid does have a little merit,

I love going to europe, when I was working in job that I hated, it was my escape, had some great times there, but there was no way I could afford this:

I am all up for subsidised enviromentally freindlier transport.

also, why is air travel such a big target for climate activists?