Activists from around the world almost effectively shut down the whole region around the G8 summit just over a week ago in Northern Germany.
We (part of the German Dissent! anti-G8 Network Infotour Group) are travelling through the UK for the next two weeks to show pictures and videos of the protests, and to talk about our experiences of organising and network building. We also have been in Scotland for G8 2005 and will make some comparisons and analysis of what worked and what did not work in '05 and '07. In just a couple of months we go to Japan
(host of G8 2008) and Korea for an anti-G8 Infotour in the region.

The Infotour will be explaining how the mobilisation worked and was built in Germany and internationally. Afterwards will be discussion on peoples experiences of past mobilisations and how we can use what we learnt to make future mobilisations more effective. Lessons learnt will be taken to share with Japanese activists. 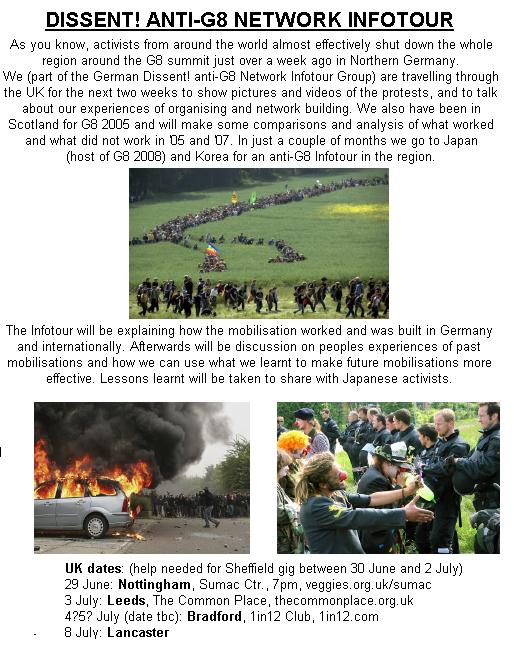 Just to confirm the Bradford date at the 1in12 is the 5th July. See you there!

Is already posted on Indymedia Sheff, but here it is here too: