Students from Nottingham have been involved in the Strident (Students Against Trident) blockade of the Faslane nuclear weapons base over the weekend.

On Fri 29th June, at 6:30am, 6 students from Nottingham and Bradford Universities arrived at the North entrance, superglue-ing their hands together to blockade the main entrance at shift change (Report and pics). They were all removed after around 40 minutes and arrested for Beach of the Peace. At the same time, 3 more students from Nottingham were arrested after blocking the South entrance using a concrete blockade. On Sat 30th, six Nottingham students were arrested following blockades at the North and South entrances of the base (Report).

Photos: Students Against Trident blockade North and South gates at Faslane nuclear base 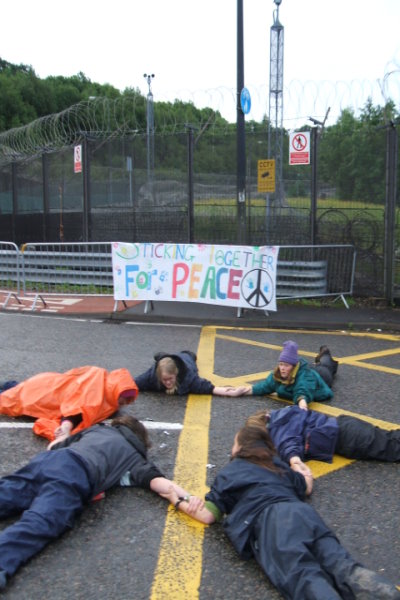 Due to the attempted suicide bombing at Glasgow airport, all the arrestees were released at around 8pm on Saturday evening. Direct action was halted after news of events at Glasgow airport came through to the camp on Saturday. A decision was made by the camp as a whole to not make any attempt to block the gates of Faslane or neighbouring Coulport until Sunday at midnight. It was also decided to inform the two police forces in operation (Strathclyde and MOD) of this decision and inform them of any non-direct-action-type demos that were to take place during this period.

The blockades are part of Faslane 365, a year long blockade of Britain's Trident submarine base. The students group blockaded from Thu 28th June to Tue 3rd.

We even got a (brief) mention in the Evening Post: