Rolls Royce in Derby has been visited by the peace group because of there involvement in the arms trade making the nuclear reactors cores to power the trident submarines which carry Britain’s nuclear weapons of mass destruction. 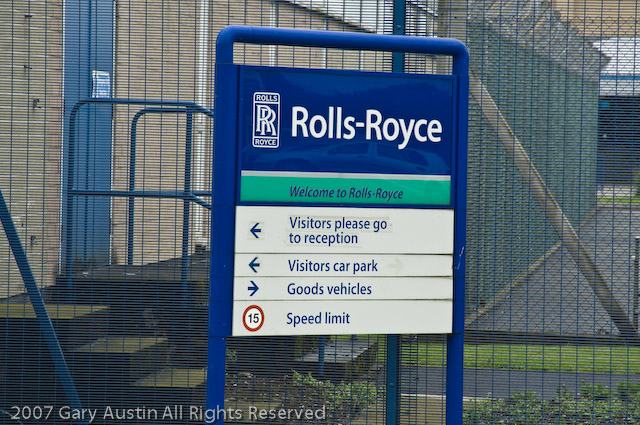 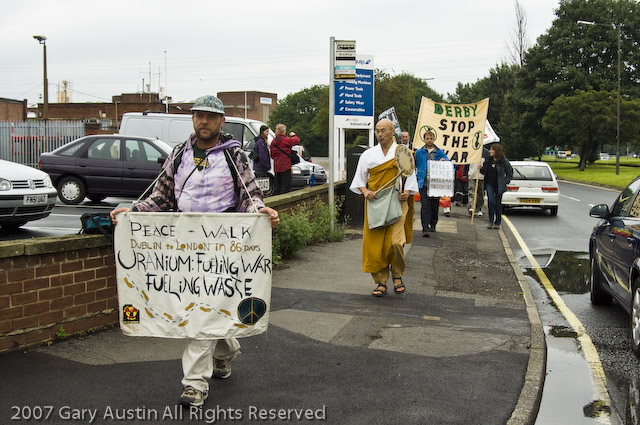 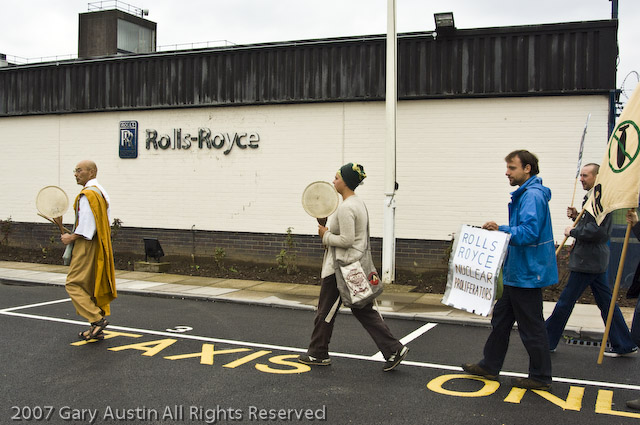 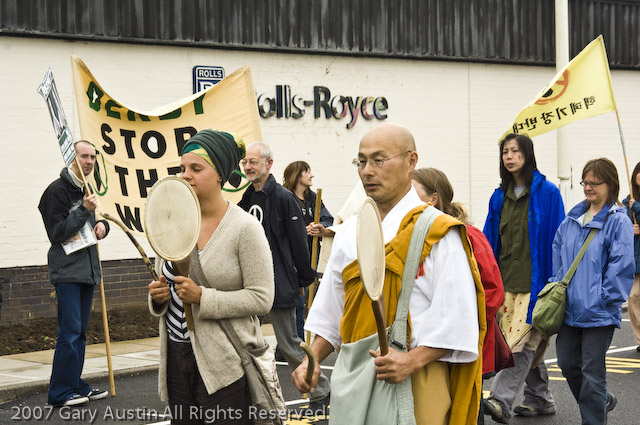 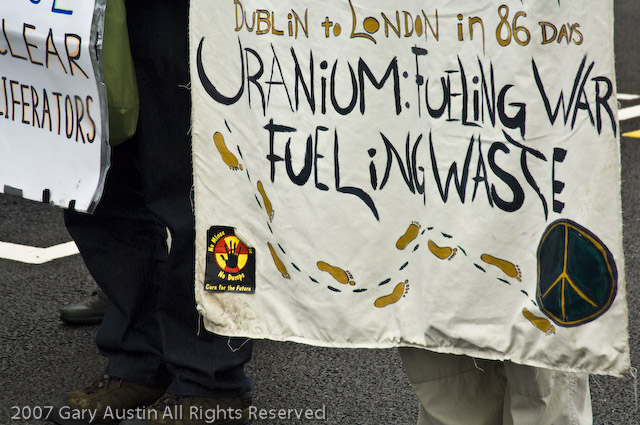 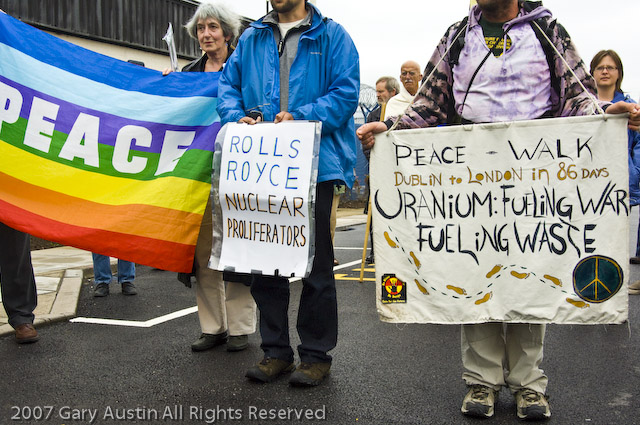 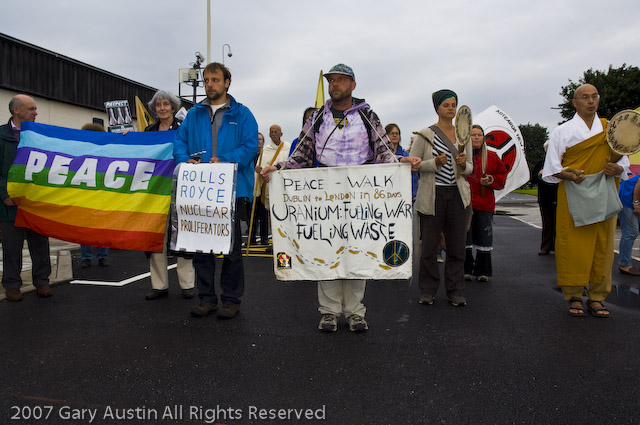 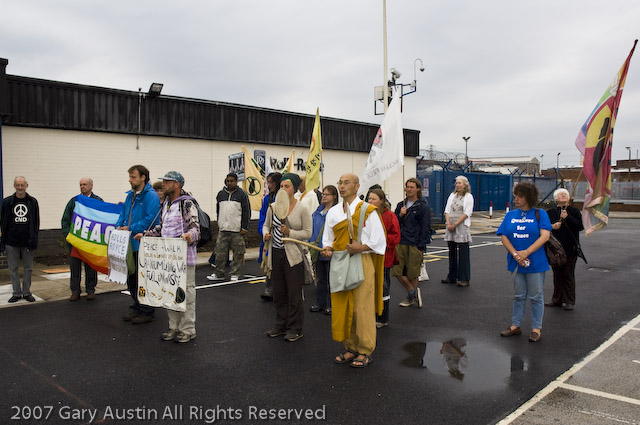 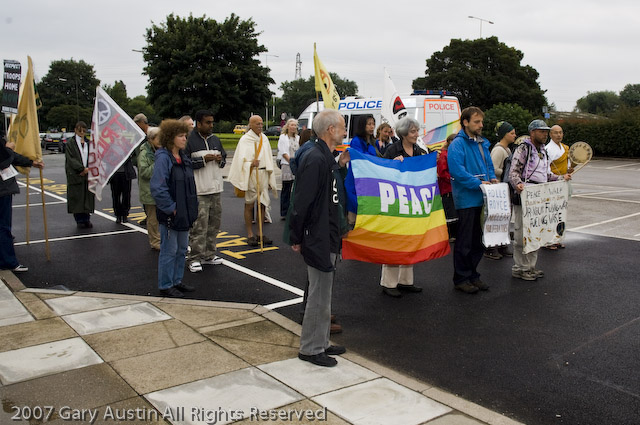 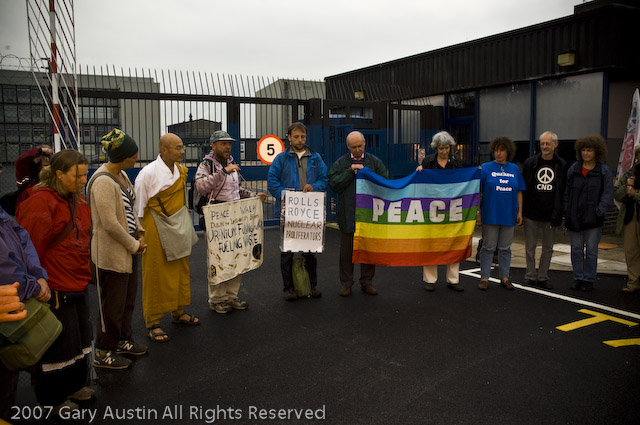 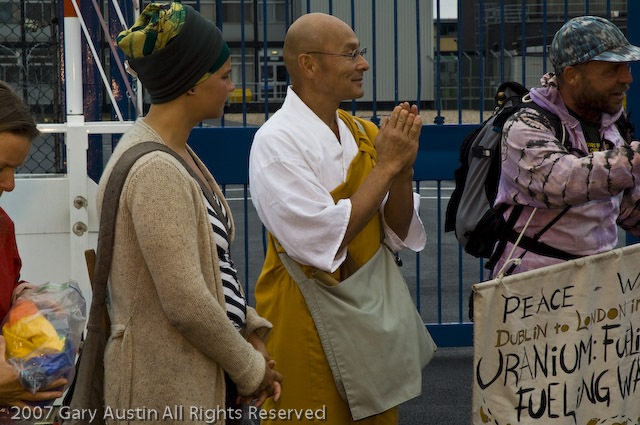 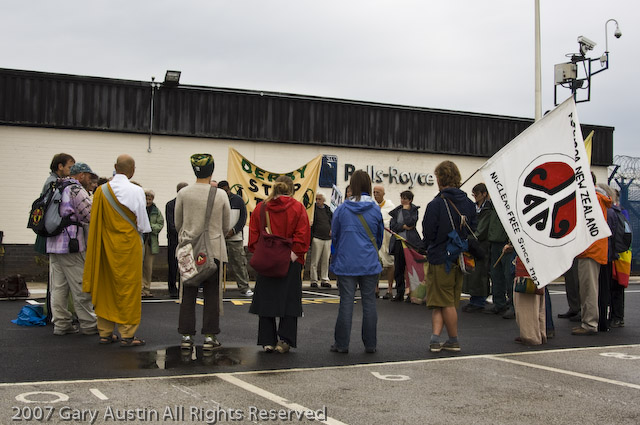 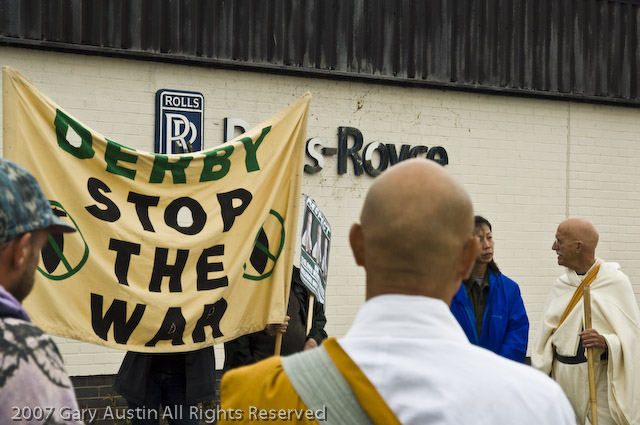 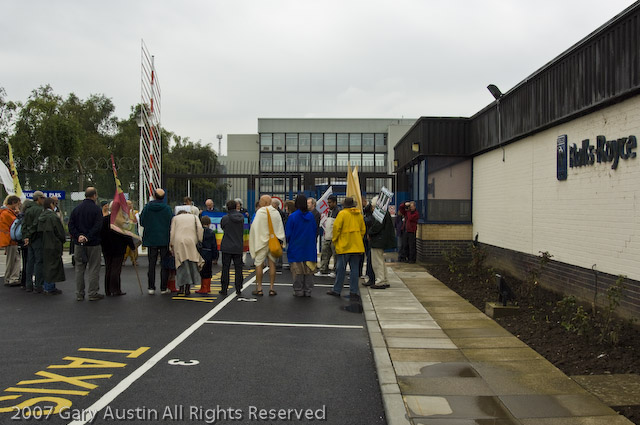 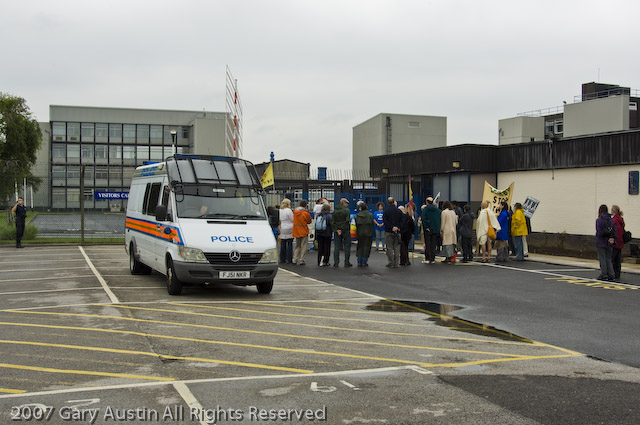 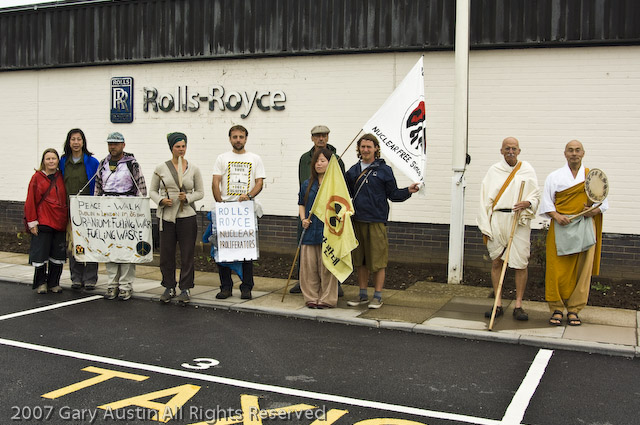 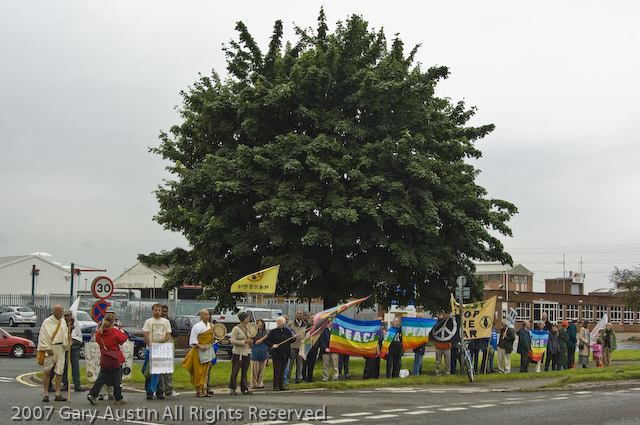 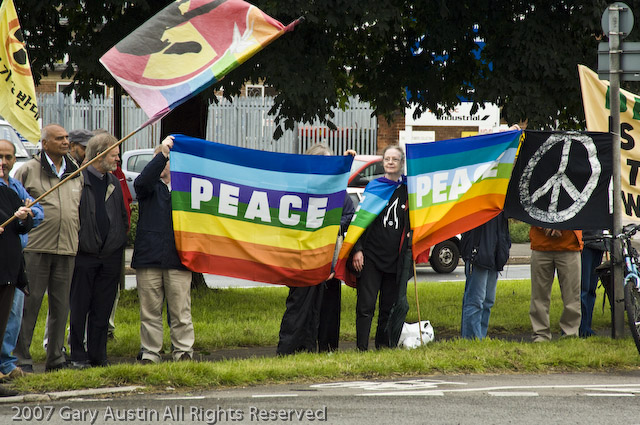 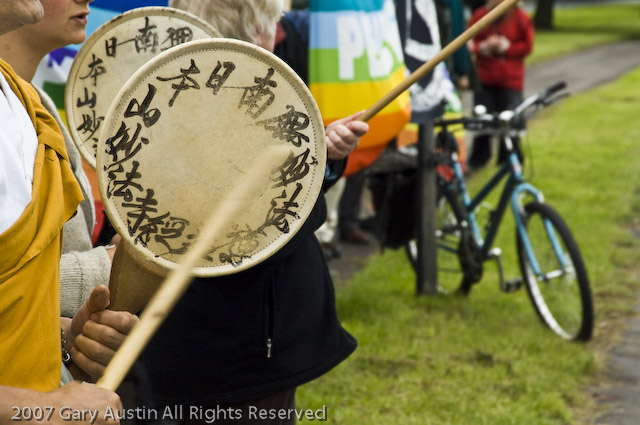 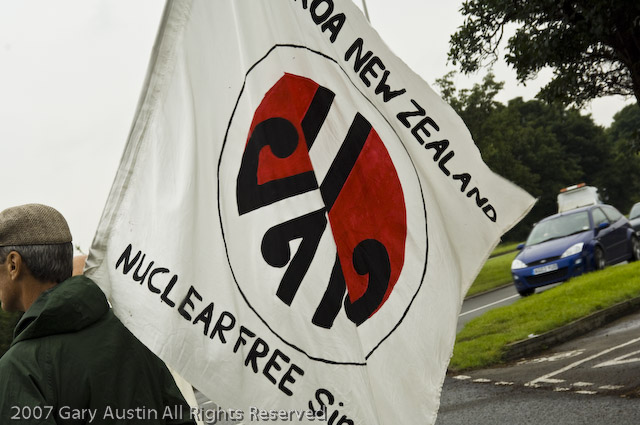 Footprints for peace are raising awareness and inspiring people to work for a community of peaceful change.

Rolls Royce in Derby has been visited by the peace group because of there involvement in the arms trade making the nuclear reactors cores to power the trident submarines which carry Britain’s nuclear weapons of mass destruction.

Britain’s Trident nuclear weapons system is illegal under international and British law because the use or threat of use of weapons of mass destruction is a war crime under the Geneva Convention and other international laws.

Rolls Royce being complicit in this crime as it is helping Britain to break it’s international obligations under the Nuclear Non-Proliferation Treaty to make progress to nuclear disarmament.

Footprints for Peace have visited many nuclear sites and realise they are not working just on local issues – but are engaged in an international struggle against a global nuclear industry that threatens us all.

There is a an urgent call for global action to break the cycle of mass destruction created by the mining of uranium, the enrichment process, nuclear power plants, nuclear weapons, the use of depleted uranium and the disposal of active waste.

The marchers started in Dublin in May of this year and will finish in London on the 6th August for Hiroshima Day going via Faslane Trident nuclear submarine base and Aldermaston and visiting many other nuclear profiteers on the way.

There also seems to be an upsurge in people wanting peace in Derby as only a few years ago Rolls Royce’s involvement in making the core reactors was little known and the recent talks, workshops and stalls by the East Midlands CND and Derby Stop the War appear to be having a great impact.

Everyone interested in peace from all spiritual beliefs and none are welcome to join in the walk.

More information can be found

All images Copyright 2007 Gary Austin All Rights Reserved, please contact Radical Images if you wish to use any of the images www.radical-images.co.uk

If images cannot be used freely by all they should not be posted on indymedia.

Down with capitalism and all the wankers who seek to profit from their involvement in activism!

I dont have a problem with non profit or NGO's using the images, they can contact me and have copies of the HI-res files.

I do however have a problem with red watch using them, which they can do under copyleft or creative commons. Under copyright I have at least legal grounds to get them removed, well in theroy...!