On Tuesday July 24th there will be a peaceful demonstration against the Nottingham Small Arms Factory – the UK office of multinational arms manufacturer Heckler & Koch. The aim of this demo is to bring the office to the attention of the Nottingham public, and to call for it to be shut down.

Assemble at 16:00 at the gate of Easter Park, Lenton Lane NG7 2PX. Bring placards, drums, whistles and your mates! (To get there from the city centre, take a number 13 or 14 bus from Mount St.) For a map, please click here. 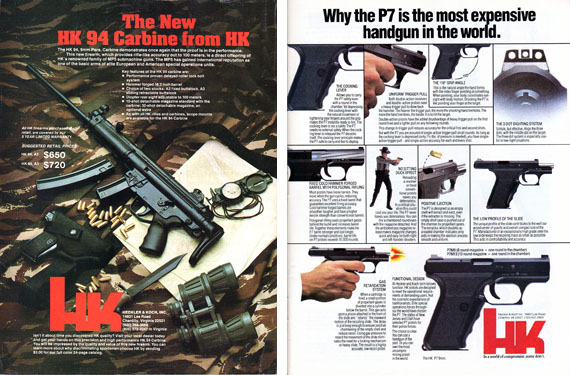 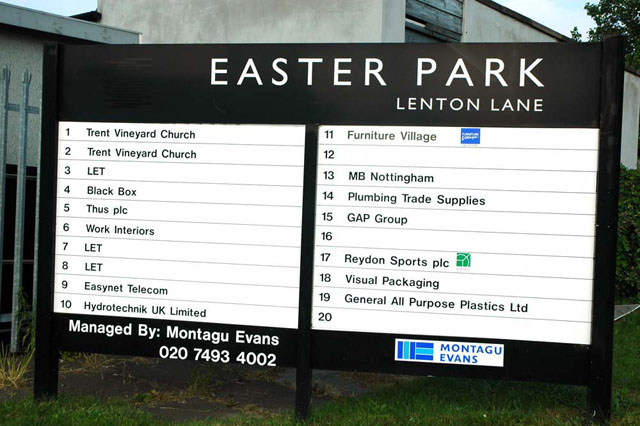 Heckler & Koch is the world's second-largest manufacturer of handguns, assault rifles, submachine guns, machine guns and grenade launchers. Their UK HQ is an anonymous unit on an industrial park off Lenton Lane, NG7. It is responsible for selling guns around the world.

Half a million people are killed by small arms each year, three quarters of whom are civilians. Literally millions of Heckler & Koch small arms are in use in around 90 countries. Heckler & Koch has licensed its weapons for production by repressive regimes such as Turkey, Iran, Mexico, Thailand, Pakistan, Saudi Arabia and Myanmar. Beyond the reach of EU arms embargoes, these countries have supplied the weapons to conflict zones such as Indonesia, Kenya and Sri Lanka.

H&K guns have been used in wars in Bosnia, East Timor and Sudan. The Heckler & Koch G3 rifle has been used by the often murderous militaries of Bolivia, Brazil, Chile, Colombia, El Salvador, Guyana, Haiti, Papua New Guinea, Paraguay, and Peru. These examples illustrate the unethical and uncontrolled nature of the industry in which Heckler & Koch is proud to operate.

Heckler & Koch's UK office is NSAF Ltd, Unit 3, Easter Park, Lenton Lane, Nottingham NG7 2PX. If you don't like the idea of these arms dealers operating in our city, then come along to the demo and let them know what you think of them!

This demonstration has been called by Disarm DSEi – a grassroots campaign against the UK’s largest arms fair, at which Heckler & Koch will be exhibiting their weapons later this year. For more information visit http://disarmdsei.evey.org/

News from the website of the Disarm DSEi Nottingham Group:

Two people were detained for 45 minutes by six police officers (including two armed officers) and threatened with arrest under the Terrorism Act. Their crime? Buzzing the doorbell of Heckler & Koch's Nottingham office. The pair were released without charge.

Ridiculous innit? A glimpse of things to come?

Banners for the demo 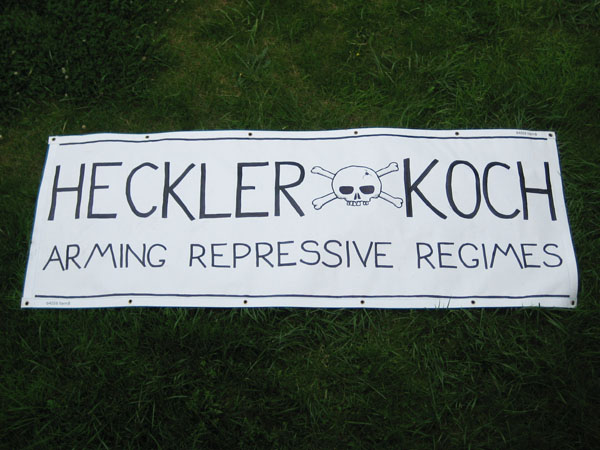 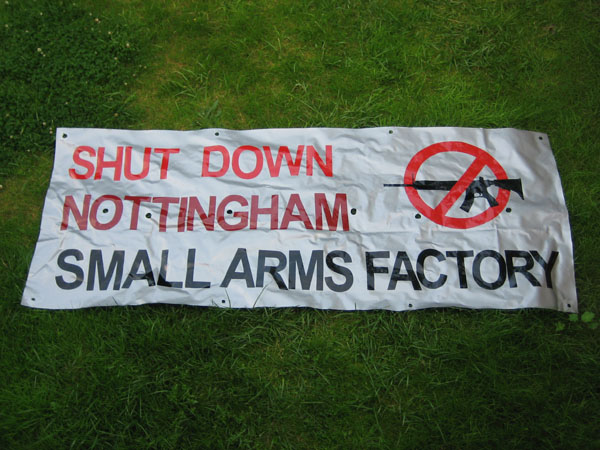 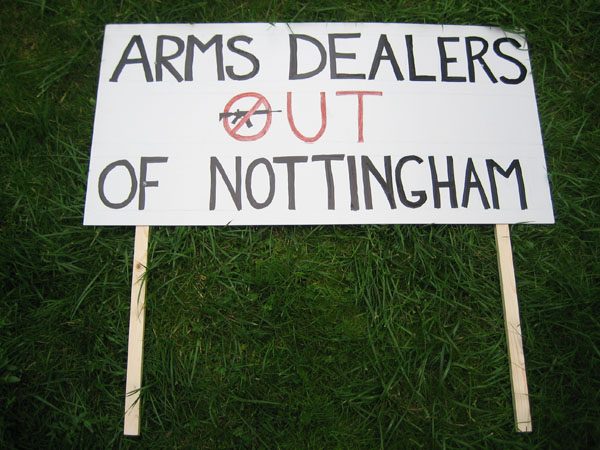 Here are some banners that have been made for the demo:

Who owns the land?

Your protest didn't get inside the front gate of the estate because it is private land. It's actually owned by Trent Valley church.
They have a website, you'll notice they are a Christian outfit.

So next door to the Church/Landowners. There is a machine gun HQ.
Beyond that, a place that makes gambling machines. Unrelated to the Machine gun people of course, but nonetheless, what does this road look like?

The Church doesn't sound like the sort of people who'd want to take gun manufacturer's money.