After more than a week of hard graft, the volunteer crew created the Last Chance Saloon again at this years Big Green Gathering. It is amazing what was achieved by a combination of recycled and re-used materials and application of endless creativity and sweat. 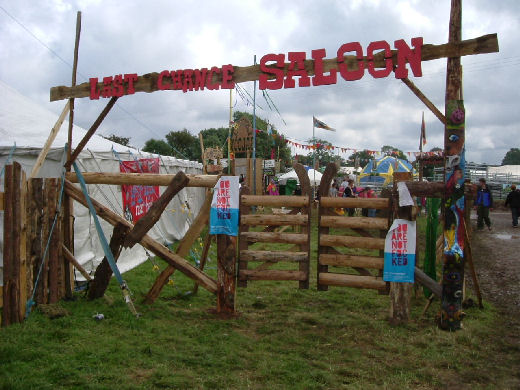 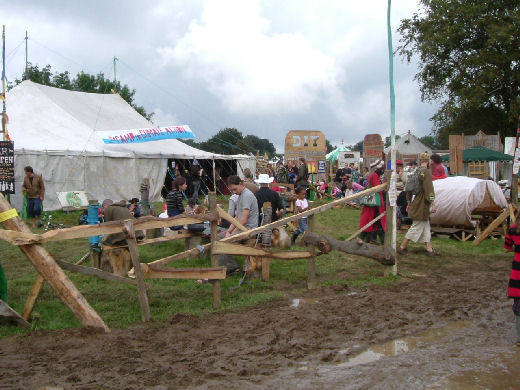 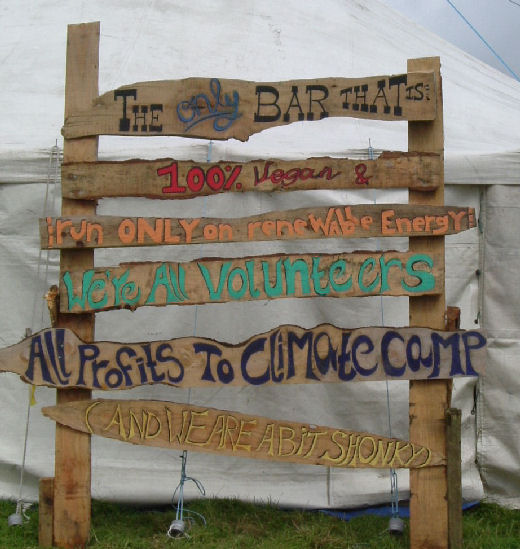 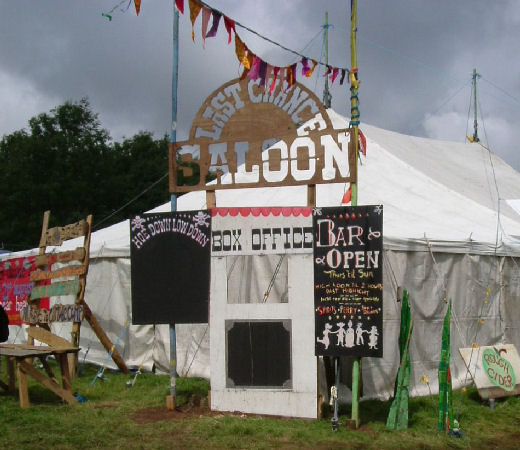 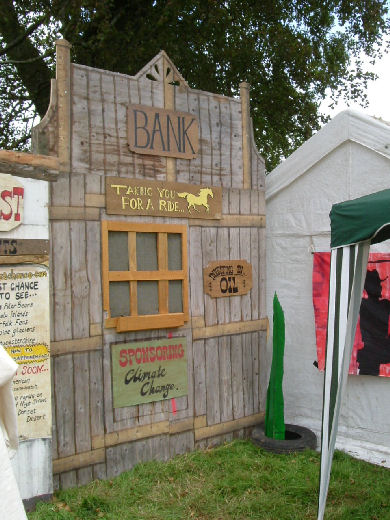 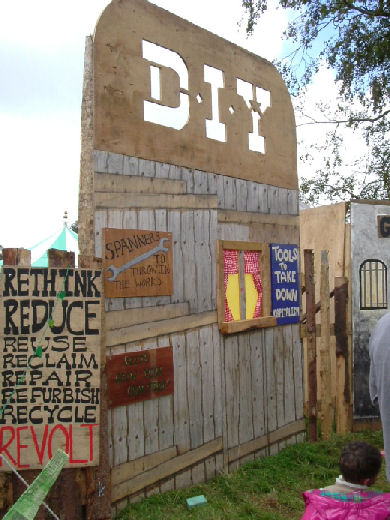 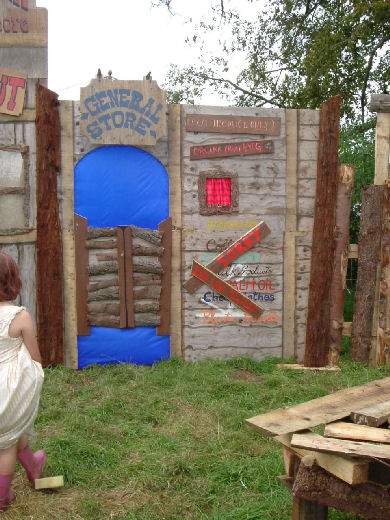 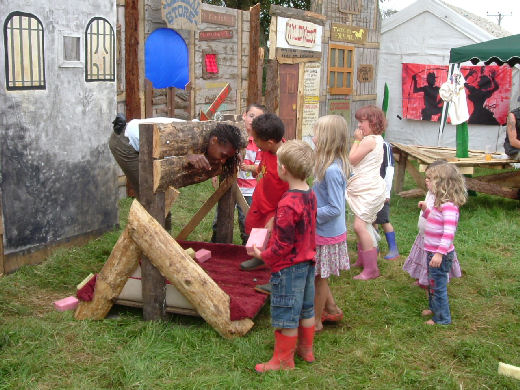 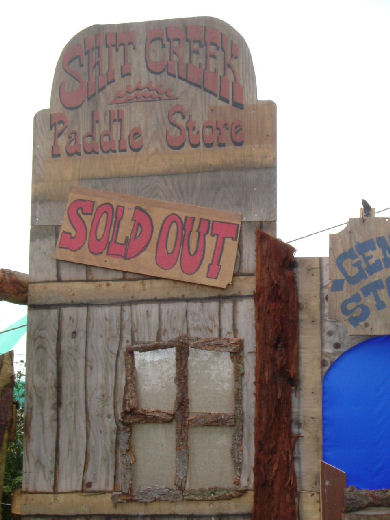 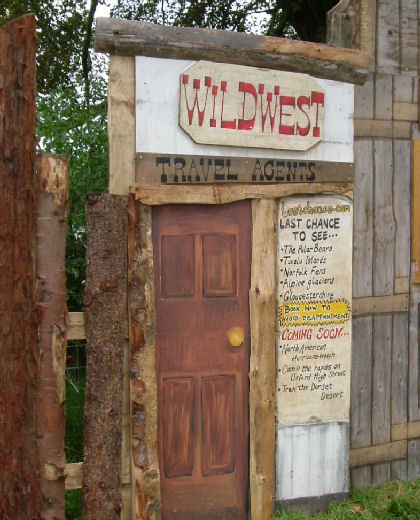 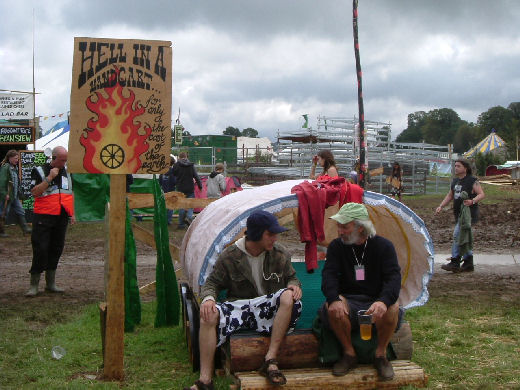 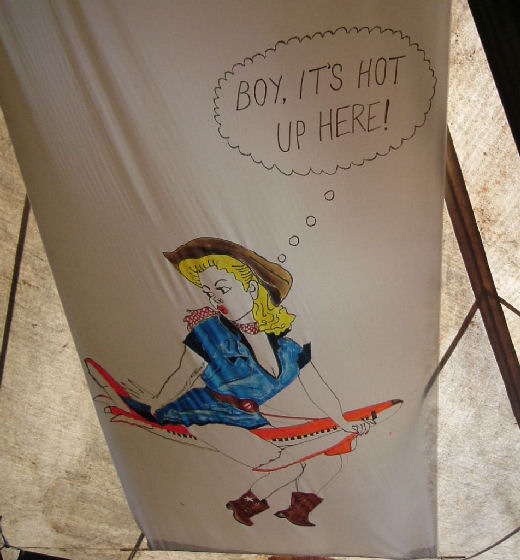 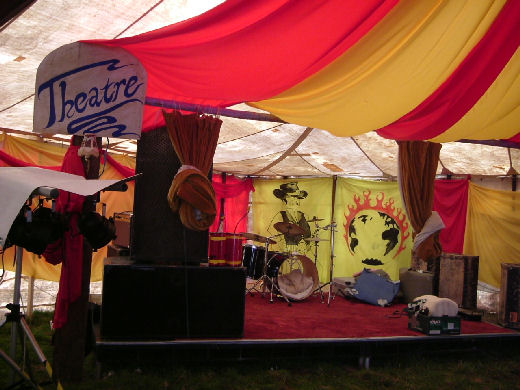 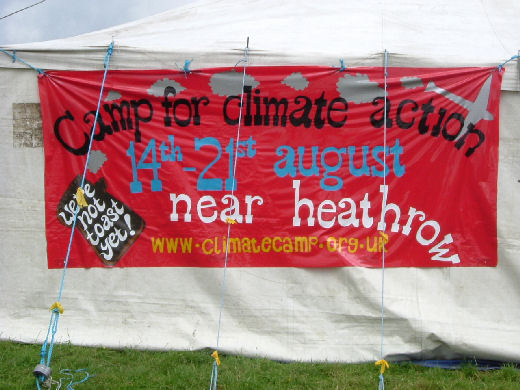 And then the work started all over again as the crew worked long and busy shifts (at the bar and behind the scenes) to serve the constant stream of thirsty visitors. This was certainly the most popular bar, and probably the most popular venue, at the whole gathering.

With a tasty, locally-sourced, vegan beer in one hand and a Veggies burger in the other we were entertained by some great performers on the Last Chance Saloon stage, from (to name just a few) Emma (with wonderful versions of Mad World and I’m a better anarchist than you) The Weird String Band (with the weirdest version of Venus in Furs) to Seize the Day who ended their set in front of a marquee-bursting crowd with a call to everyone to join them at Climate Camp.

The huge popularity of the Last Chance Saloon raised vital funds for Climate Camp but also meant that loads of information could be distributed to visitors and many more people have decided to come the Camp to challenge the air travel industry.

Well done and thanks to all who put in so much hard work and commitment to make the Last Chance Saloon such a great success!

As a footnote we should also thank BAA for the extensive promotion of the Camp for Climate Action, via its attempted injunction. It clearly worked as many people who were previously undecided are now making travel arrangements to get to the Camp.

Indeed George Monbiot, writing in yesterday’s Guardian is one of those, although not only as a climate change campaigner; he calls on people to join him at the Camp as a protest against the increasing repression of dissent over the last twenty years of which BAA’s injunction is just the latest example.

Meet at Staines railway station 10 am on 14th where there will be a welcome desk and transport to the camp.

Superb and brilliant humour, imagination and artistry. Hope you'll be bringing all of those to climate camp. Looks like you had your fare share of mud there though.


a shame i didn't go. but excellent stuff!! has lifted my spirits to read about it and i know how much hard work went into it.

see you at the camp!

Well done to those who were raising money for upcoming events but I have to add that my lasting memory of the BGG was a festy turned almost completely fucking commercial, razor wire 20 metre tall fences and full on nazi security scum checking wrist bands so frequently and ejecting people by force if not in posession of one ! Oh and with the price tag of £120 ......

Best of luck with climate camp I will be there to help but advice for next years BGG dont go cos
Something not quite right with this unless you a rich lifestylist playing at being green and hippy!

If you book for BGG early its half price, thats £55. If you cant afford that work there instead.

I was at BGG

And what next year?

A lot of the people involved in Last Chance are probably unaware of what the festival outside the Saloon was much like as they worked so hard many of them didn't appear to leave the vicinity of the bar for the whole festival (which for those who were there early to set up and stayed to take down was over a week!)

I was lucky to have commitments other than the bar and as a result dragged myself around the festival and saw a bit of what was going on. It was a varied affair.

The absolute worst thing I saw was the Lost Vagueness bar which was running off a petrol generator and illuminated by a huge number of incandescent lightbulbs. All the staff seemed like coke-heads and they sold over-priced alcohol to mindless music.

I was very proud to assist a raid on the venue which disconnected the the generator and plunged the coke-fuelled dive into darkness. (Rich and Sophie you are my heros)

Other than that there were a number of nonsense peddlars ranging from the cash-in eco-products to the spiritual mind-rubbers. Whether it's people asking for lots of money for nothing much or a little bit of attention for nothing at all...

At the same time there was some really worthwhile stuff. The campaigns field where Last Chance was based had stalls from the likes of Advisory Service for Squatters, Centre for Alternative Technology, Travellers Aid Trust (iirc) - all reliably right on stuff. Other highlights for myself were permaculture, AMARE (Alternative Media And Renewable Energy), Sustainable Living. Evolving Minds was a mental health forum based on a film of the same name and the most important part of the festival for myself.

The prohibitive ticket price is definitely an issue. The route of this seems to be the licensing and the inevitable professional security and high fence. All the rest of the problems seems to stem from this. The only conclusion I draw is that it would be better if we could direct our energy towards squatted and unlicensed events. (It just so happens that there's one coming up next week - climate camp itself.)

The thing is there were thousands of people at Big Green. Will we be able to bring many of them with us?

Events sometimes need razor wire &"nazi security" because arseholes come in & literally rape, murder & pillage people at our events like anywhere else,any1 who calls security nazis is being abit middle class. Nazi killed& tortured children for f"""s sake,was that happening at BGG.Dont take the word lightly, its not a easy job dealing with murderers & armed robbers.
That said BGG was pricey & I couldnt afford to go or be a slave for any of the groups there including "last chance " again, great name once, but abit fatalistic.Abit like doomed were all doomed as a dour scotsman said on Dads Army.
At Horizone camp tranquility were attacked by a soundsystem, no one really helped, we should have been allowed to bash them for attacking us & chucked them off site with other pisshead agent provocateurs vampires, but idiots & pc dogooding police made it hard for us.
Security at Drax was much better organised by comms team, ex marine, special forces,taxi & security people, who sadly seemed to get no thanks by the in collective because we werent doing it the "normal" & used way whatever that is & used scarey alpha to zebra signals.

Their plastic pint glasses were not recycled or compostable - how green is that?

To the last commenter,

the plastic glasses were not in fact plastic, but a form of vegteble starch, that we firstly washed up and reused and finanly when they were too damaged to be reused composted, so please check your facts before making comments

Perhaps you should speak to the Big Green as I was with the recycling team after the event in your field. The plastic glasses did not go into compost nor were they recycled – fact!

To Joimson: if what you say is true, you should take that up with BGG. We went to a lot of trouble to source biodegradeable glasses (hard to find, and more expensive), and volunteers spent hours washing them for re-use. The BGG gave us compost sacks for them, and if they didn't do that, complain to them!

If we are talking about biodegradable PLA it can only be composted in certain industrial facilities and the UK does not yet have sufficient capacity. For this reason PLA will end-up in landfill or contaminating other recyclable material. Some organisations have tried PLA for environmental reasons but have returned to using recyclable PET plastic instead. This is an issue for Last Chance to resolve with BGG as they are waste-producers i.e. they brought the material onto site. Sorry I got it wrong - the glasses ARE compostable they just weren’t.