Kick foie gras out of Nottingham

Animal welfare campaigners from Nottingham are taking to the streets in order to rid Nottingham of liver disease (or Foie Gras) being served in restaurants. 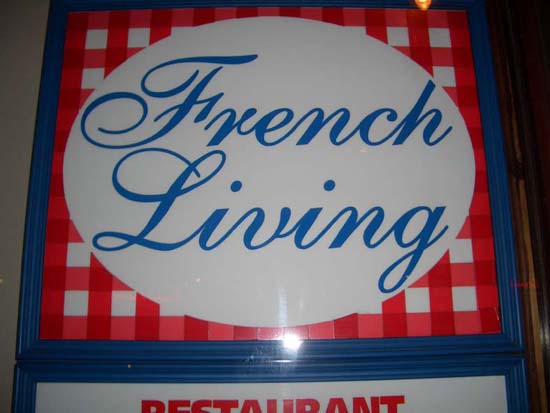 One of the culprits. 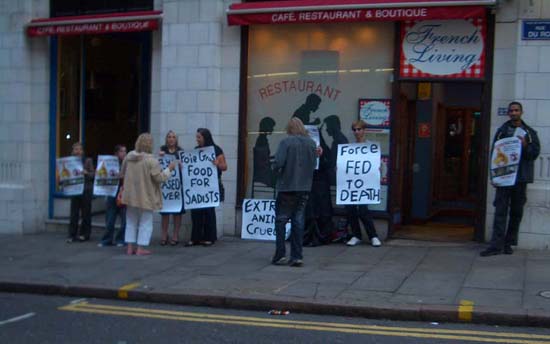 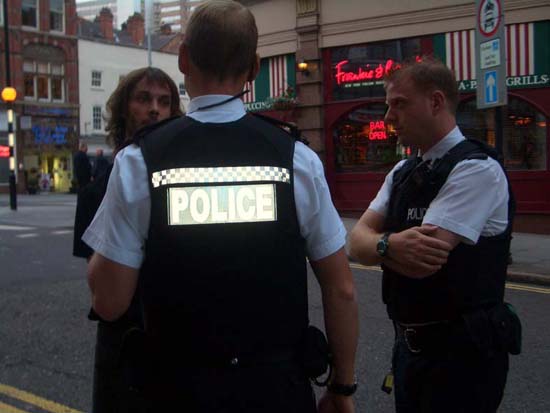 Please officer can you get rid of these protesters?

yummy - 'the diseased liver for me please!'

Foie gras (French for "fatty liver") is produced by cramming pipes down the throats of ducks and geese and force-feeding them until their livers become painfully diseased and enlarged and, in some cases, their organs rupture.

Investigations into foie gras farms in Europe and the United States have all revealed the same thing: sick, dead and dying animals, some with holes in their necks from pipe injuries. An Animal Protection & Rescue League investigation found one farm where ducks with bloody beaks and their wings twisted together were jammed into wire cages. At another farm, birds were dangling by wires as blood spilled from wounds in their necks and onto the live birds beneath them. After being subjected to this constant torture for about a month, ducks and geese are shackled upside-down and their throats are cut.

Foie gras production is so cruel that it is prohibited in the UK, Denmark, Finland, Germany, Luxembourg, Israel, Norway, Poland, Sweden, Switzerland and the Czech Republic. In the US, the sale of foie gras was banned in the city of Chicago last year, and the state of California has passed a law banning the sale and production of foie gras, which will be phased out by 2012. Celebrity chef Wolfgang Puck recently announced that he will no longer serve foie gras in any of his restaurants. Consumers across the globe have demanded the removal of foie gras from restaurant menus, yet some restaurants continue to sell it.

Watch the video narrated by supporter of the campaign, Roger Moore:

Well done campaigners, I saw you lot last week, whens the next demo, we have to stop these sick people!

Thanks to the protestors, I missed out on a meal, my wiife had booked a table but having met and spoke to you guys we went elsewhere.

I ahd no idea, we cetainly won't be going to French Living or the others.

whens the next demo

Sometimes you live in a bit of a bubble. I thought Foi Gras was a thing of the past! Whens the next demo. this shouldn't be still happening in the 21st century.

Next demo is at Sat bains